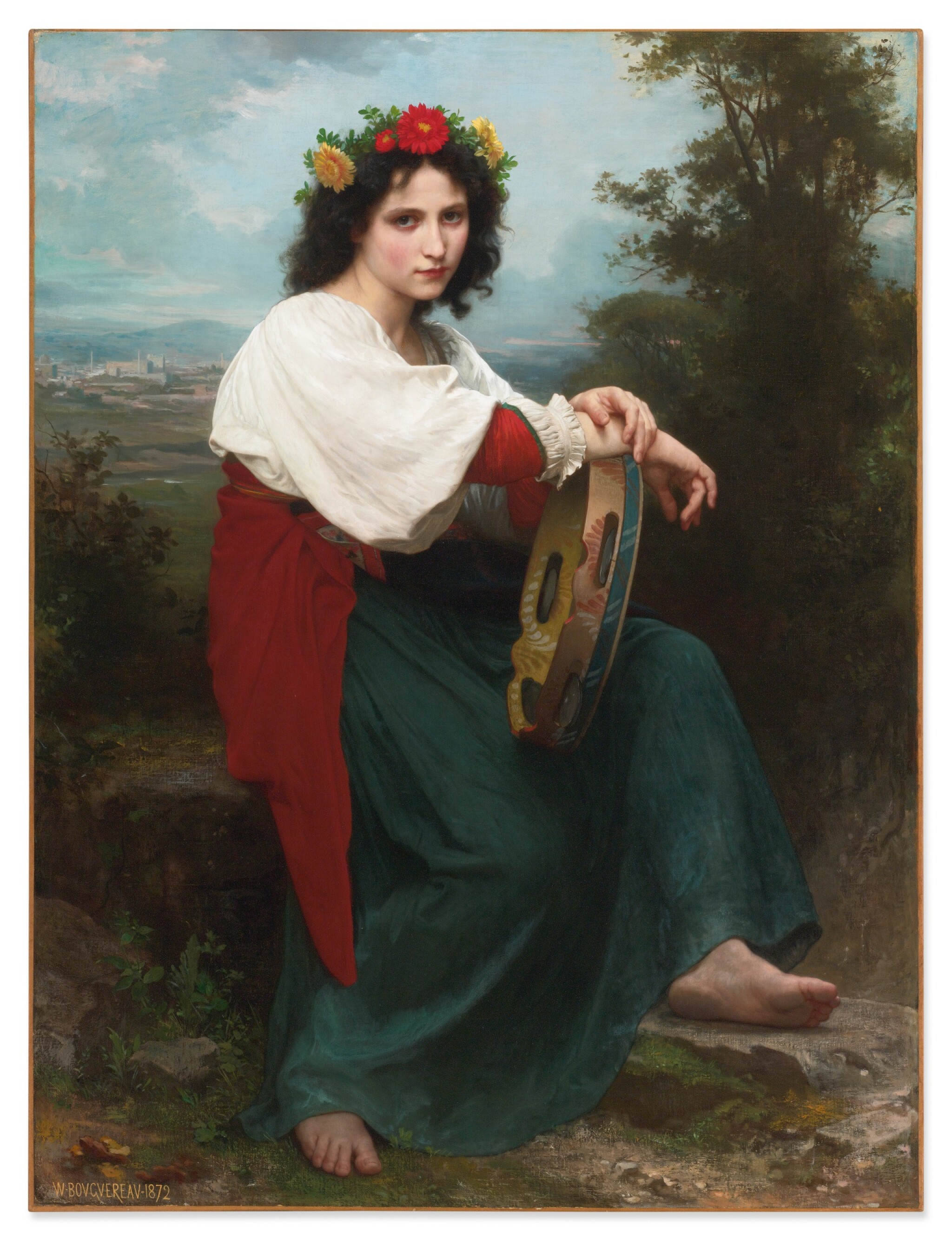 In 1850, Bouguereau was awarded the Prix de Rome, providing him the enviable opportunity to travel and study throughout Italy. Over three years, the young artist filled numerous sketch books and canvases with copies of Renaissance masterpieces, detailed drawings of ancient artifacts, and colorful landscapes of the idyllic hill towns and lake regions around Rome. Bouguereau was particularly captivated by the simple beauty of the Italian country girls who lived in Italy's ancient cities. Profoundly moved by this vision even ten years after his return to France, the artist told his students that they must "go and study antique genius at its original source; go and seek inspiration under those wonderful skies, in the midst of the delights of nature and the arts, in a hospitable villa, full of shadows and poetry, whose spell none of us who lived there can ever forget" (as quoted in Vachon, p. 34). This "spell" proved a powerful inspiration for a number of compositions completed by Bouguereau in the late 1860s and early 1870s, the years surrounding the tumultuous events of the Franco-Prussian war. Often restricted from travel and with his daily routines strictly limited, the artist escaped by painting variations on Italian themes, most often country women including the young mother of During the Harvest (1872, private collection) and the lovely Jeune Italienne puisant de L'eau (1872, private collection). Among these many works, L'Itaienne au Tambour de Basque stands as one of the most impressive examples of Bouguereau's ability to combine his early impressions of classical form with an appreciation of individual female beauty in an elevated, universally appealing vision.

Unlike the humble or demure models of During the Harvest or Jeune Italienne Puisant de L'eau, L'Italienne au Tambour de Basque is a powerful, full-length portrait -- allowing the exotically beautiful woman, dressed in colorful costume, posed on a rocky hill, to confidently cross from the sun-baked landscape into the viewer's space. Her firm posture and full figure are inspired by Bouguereau's love of classical Greek and Roman subjects as envisioned in his L'art et la literature (1867, Arnot Art Museum, Elmira, New York), in which two Muses of mythology dominate a pastoral landscape filled with objects of antiquity. The Muse of Art wears a costume of vibrant red and cool gold and her creamy skin that is juxtaposed with the soiled soles of her feet, providing for a mix of the regal and the real. Similarly, L'Italienne's costume defines her form, as the heavy folds of her deep blue skirt fall over her sculptured legs exposing her roughened feet while the marble white of her chemise frames her tanned skin. While the Muse holds her attributes of palette and stylus, the Italian maid holds a tambourine, an easily recognizable symbol of the Southern European lifestyle. Tambourine players were often the center of frenetic dances held at rural festivals and harvest celebrations. The instrument's carefully detailed metal disks, fixed within a wooden frame decorated with folk symbols, rests against her legs, while her fingers are posed, ready to strum the vellum surface and create bacchanalian music. Wearing a crown of wildflowers in lieu of laurels, with the spired landmarks of her ancient home in the background, this Italian beauty is an evolved classical character, a contemporary muse of music and a happy life.

However evocative her beauty, Bouguereau's peasant girl was firmly based in reality. From the minimal title of the painting, to the striking rectilinear composition, the artist transforms memories of Italy, with its history and mythology, into a focused scene of an "everyday" woman— a very popular subject in late nineteenth century art. The figure was most likely based on a French model painted in the artist's studio, yet the landscape infused with golden light is certainly from the artist's memory of his travels. As such, the work's realistic elements are complemented by those idealized. The rocky setting, with its scrabbled trees and hazy sky, and the beauty's costume, mixing Bohemian and Italian design elements, serve decorative rather than narrative purpose as the perfect home and habiliment for this maid of modest means. Without the distraction of a story or allegorical meaning, the artist shifts all focus to form with simplified lines and an uncluttered composition.

The desirability of Bouguereau's compositions of Italian maids was perfectly summed up by René Ménard, who wrote in Portfolio "rusticity is not with this painter an instinctive sentiment... his peasant woman seems to be made as if the princesses transformed into rustics by the magic wand in the fairy tales had come to be models for his pictures" (Réne Ménard, "Famous French Artist's in their Studios," n.p.). What's conveyed is rural beauty that exists outside modern life—but could easily be found on vacation abroad or, better for the artist and his dealers, with a visit to Bouguereau's studios and, perhaps, the purchase of a painting seen there—a lasting souvenir of the good life.