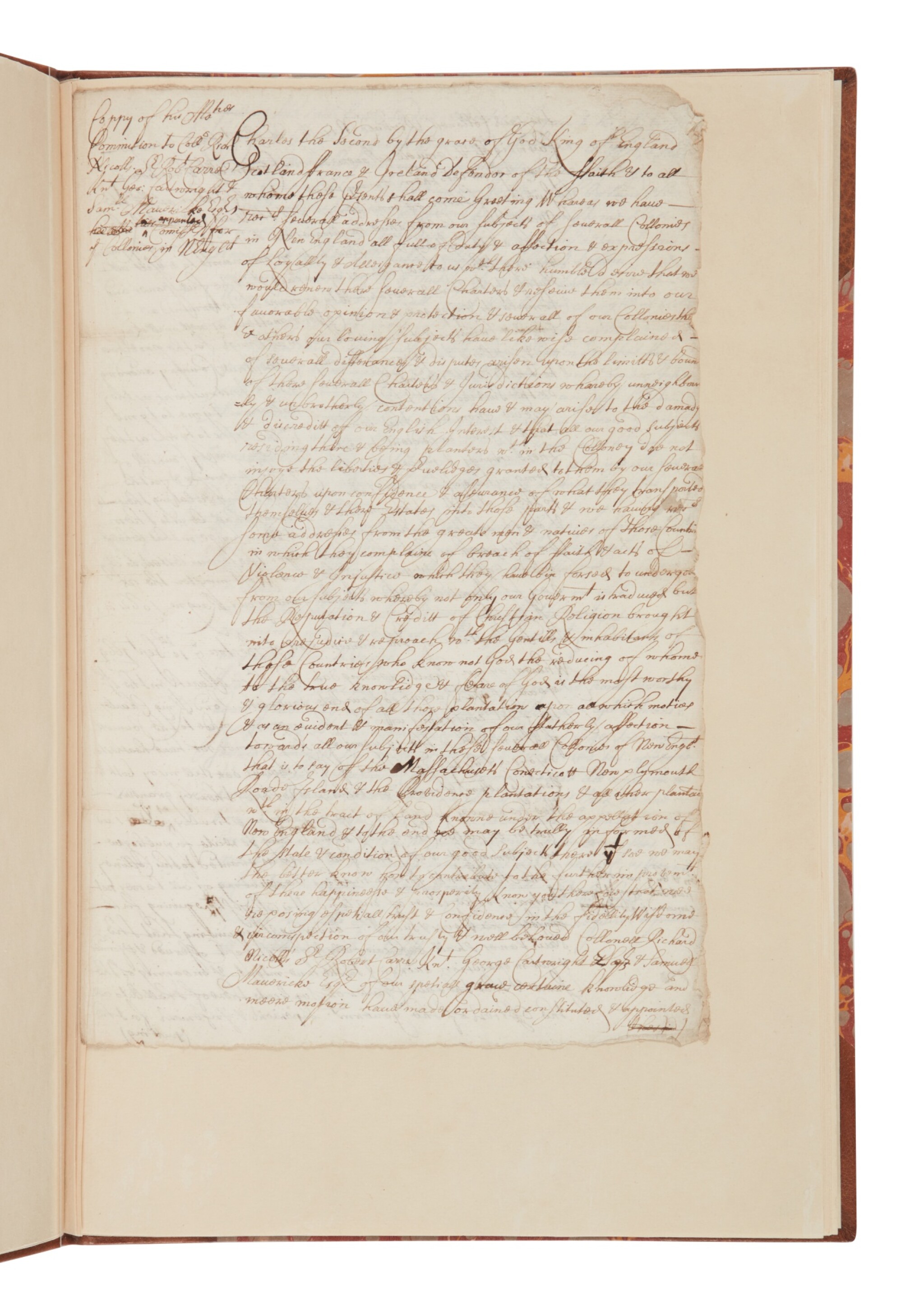 Documents include (as they are bound):

1. (New England). Manuscript document, being a "Copy of his Majesties commission to Col Richard Nicholls, Sir Robert Carre, George Cartwright and Samuel Maverick Esprs appointed Commission for the Colonies in New England." [Np, but likely copied in New England: ca. October 1664]. 3 pages (approximately 324 x 208 mm), on a bifolium, docketed on verso of second page; old folds, closed tear to lower margin of second page, some minor soiling to folds and margins. A copy from Carteret's papers of King Charles's commission to bring more British administration to the New England Governments: Massachusetts Bay, New Plymouth, Rhode Island, Connecticut, and New Haven. The commission was granted on 25 April 1664, with Col. Richard Nicholls casting the deciding vote. Nicholls, Carre, Cartwright, and Esprs were also issued a royal commission to capture the Dutch settlements along the Hudson River, including New York. The commissioners sailed, and arrived in Boston in July of 1664 before traveling to Rhode Island and Maine, in an attempt to assert the King's authority on the various colonial administrations. In the process, they copied documents they were shown and reaffirmed rights. The present copy of the commission was apparently drawn up whilst in New England, as it includes a page and a half of text composed by the Boston Council following a meeting on 10 September 1664. Ultimately, Nicholls, Carre, Cartwright, and Esprs made little headway in Boston in terms of persuading the colony to relent to Royal authority. As a result, they moved up to Maine and on to Rhode Island. Provenance: The heirs of Sir George Carteret (by descent).

2. (Maine). Manuscript document being a copy of a grant of land north of the Saco River, to Thomas Lewis and Richard Bonython, by the Council of New England. 12 February 1629. 3 1/2 pages, folio, (315 x 195 mm). Countersignatures of Robert Warwick and Edward Gorges, reaffirmation of grant dated June 1631, countersigned by Thomas Wiggin, James Parker, James Watts, and George Donglan, docketed "Patent Saco: east of the river" on verso of second leaf; old folds, scattered staining and soling, edges worn, split to fold. An early copy of the Saco Patent made by the King's commissioners on their visit to Maine in the summer of 1665. The Patent granted the land from 40-48 degrees north to the Plymouth Company. In turn, the Plymouth Company granted it to Mason and Gorges in 1622. This, however, conflicted with other patents, and the commissioners heard evidence from the heirs of Gorges and the Massachusetts Colony who were both trying to reclaim their rights. The commissioners were ultimately more successful in their attempts to encourage loyalty to the crown in Maine, offering Maine a crown-supported provincial government. Provenance: The Heirs of Sir George Carteret (by descent).

3. (New Jersey). Manuscript document, being a copy of an indenture for land in New Jersey released to Sir George Carteret of Saltram, by James II. [Np, but presumably New York: dated 29 July 1674, but docketed "1674 Copy of Jersey release to Sir Geo Carteret"]. 3 pages (380 x 240 mm), on a bifolium, possibly in the secretarial hand of Matthias Nicoll, with note signed by Matthias Nicoll ("Matthias Nicolls, Secr."), and annotated "This ... release compared w. the record and examined by mee" on verso of second page; old fold with splits reinforced with tissue, some browning, minor soiling to margins. In 1664, Charles II granted to his brother, James Duke of York, a large portion of land in North America, much of which was under Dutch control. In turn, the Duke gave the land between the Hudson and the Delaware to Lord John Berkeley and Sir George Carteret for services rendered during the English Civil War. After the expedition of 1664, which captured New York and the Dutch trading posts of the Hudson, the lands of New Jersey passed to Carteret, but the Dutch briefly secured the territories back in the late 1660s, only to be driven out again. This copy of Carteret's indenture for the lands of Long Island and most of central and northern New Jersey was a reaffirmation of the earlier gift by James II, seemingly copied out and authorized by Matthias Nicholls (or Nicholl) in New York. Provenance: The heirs of George Carteret (by descent).

4. (Virginia). Manuscript letter signed from Lord Shrewsbury to Sir Edmund Andros. Whitehall [London]: 30 November 1694. 1 page (325 x 195 mm) on a bifolium. Accomplished in a secretarial hand, docketed "copy Duke Shrewsbury ... about the northern neck"; one or two stray spots or stains, minor marginal soiling. In the present letter Lord Shrewsbury grants his support to Thomas Fairfax for his 1689 claim on lands between the heads of the Potomac and Rappahannock rivers (an area known as the Northern Neck Grant). The letters comes on the heels of a long running dispute surrounding this tract of land, which had originally been gifted to Sir Thomas Culpeper by Charles II in 1649. in 1694, Andros was serving as Governor General of Virginia.

5. (New York). Autograph letter signed from John Andros to his brother, Sir Edmund Andros, then Governor of New York. Guernsey: 22 February 1674. 1 page (325 x 228 mm) on a bifolium. Addressed and docketed on verso, remnants of wax seal; old folds, some browning and soiling, tears costing a few letters. In the present letter John Andros writes to his brother, Edmund, who had recently arrived in New York as Governor. He expresses his hope of a safe journey and arrival, and conveys news of business and family affairs in Guernsey. Sir Edmund Andros was an unpopular colonial governor of New York, with his governing style leading to the "Andros Rebellion" against taxes in 1689.

For further information on the condition of this lot please contact americana@sothebys.com