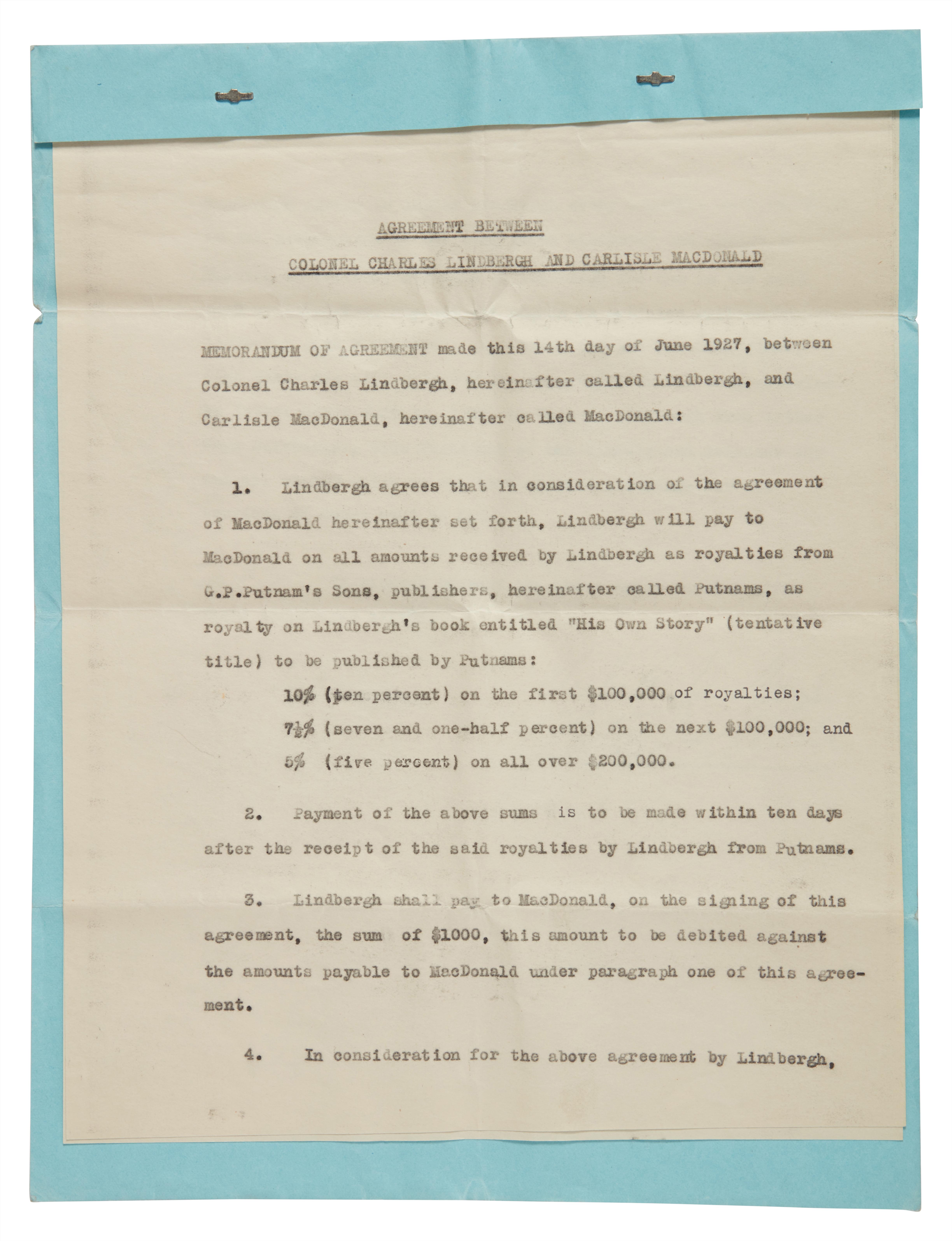 2 pages (280 x 216 mm), [New York,] 14 June 1927, neatly attached to a blue legal file docket, being a memorandum of agreement for the publication of a book on Lindbergh’s trans-Atlantic flight by G. P. Putnam’s; light creases. [Accompanied by:] a printed outline map of the Northern Atlantic Ocean bounded by North America and the west coasts of Europe and Northern Africa (456 x 205 mm on paper watermarked with the seal of the United States), with grid of latitude and longitude lines, dated in pencil lower right "5-19-27" and annotated in pencil and red pen as an aviation weather map with streamlines and high- and low-pressure areas; light creases.

Author and ghostwriter—and author: the writing of "We", the aviator’s firsthand account of his historic transatlantic flight. In 1919, a New York City hotel owner named Raymond Orteig offered $25,000 to the first person to fly nonstop from New York to Paris. By 1927, the prize had still not been claimed, although six pilots had lost their lives in the attempt. Lindbergh convinced a group of St. Louis businessmen to underwrite a plane built to his own design modifications. Ryan Aeronautical Company of San Diego produced The Spirit of St. Louis, and after a cross-country shakedown flight, Lindbergh took off, 20 May, from Roosevelt Field near New York City at 7:52 a.m. He landed at Le Bourget Field near Paris at 10:21 p.m., 21 May. He had covered some 3,600 miles in thirty-three and one-half hours and won not only the Orteig Prize but the adulation of much of the world.

Before he left New York, Lindbergh contracted with the New York Times for the exclusive rights to his own story of the flight—if it was successful. The front-page story of his safe landing and many subsequent feature stories published in the Times before the return to New York of the aviator and his plane aboard the U.S.S. Memphis, 11 June 1927, carried the by-line of Charles Lindbergh, but they were actually written by the paper’s Paris correspondent, Carlisle MacDonald. Because of the arrangement between Lindbergh and the Times, MacDonald had far greater access to the pilot than any other correspondent.

In the meantime, Lindbergh had also agreed to provide an autobiography with a full account of the transatlantic flight to G. P. Putnam’s Sons. Putnam’s, as a matter of course, engaged a ghostwriter for the work: Carlisle MacDonald. To the publisher’s surprise, Lindbergh would not approve MacDonald's account, which he found to be overly dramatic and inaccurate. He vowed to write the book himself—and did so in some three weeks. The present Memorandum of Agreement demonstrates, however, that Lindbergh remained in MacDonald’s debt. And while it is not reflected in the agreement, which gives the tentative title of the book as His Own Story, it was MacDonald who came up with the title "We" a pronoun that the aviator frequently employed when speaking of his triumphant flight. According to the dust-jacket of the first edition, the pronoun title refers to Lindbergh's view of a deep "spiritual" partnership that had developed "between himself and his airplane during the dark hours of his flight." The book was published with a less obscure subtitle: The Daring Flyer's Remarkable Life Story and his Account of the Transatlantic Flight that Shook the World.

The present Agreement states that Lindbergh will share his royalties on the book with MacDonald on the following schedule: 10% of the first $100,000; 7 ½ % on the next $100,000; and 5% on any amount above $200,000. In return, "MacDonald agrees to render Lindbergh every possible assistance in the preparation of the book which Lindbergh has agreed to furnish to Putnams; releases to Lindbergh for use in the said book or otherwise, any and all rights in articles written by Lindbergh with MacDonald’s assistance for the New York Times … and releases any and all claims which he may have against Lindbergh for all services of every kind to date." The Agreement also notes that Arthur Hays Sulzberger had released the Times’s copyright on the Lindbergh-MacDonald articles.

The accompanying map is dated the day before Lindbergh took off from Roosevelt Field, and it was evidently used in planning his record-breaking flight. It was presumably given by him to MacDonald sometime after his arrival in France.

For further information on the condition of this lot please contact americana@sothebys.com