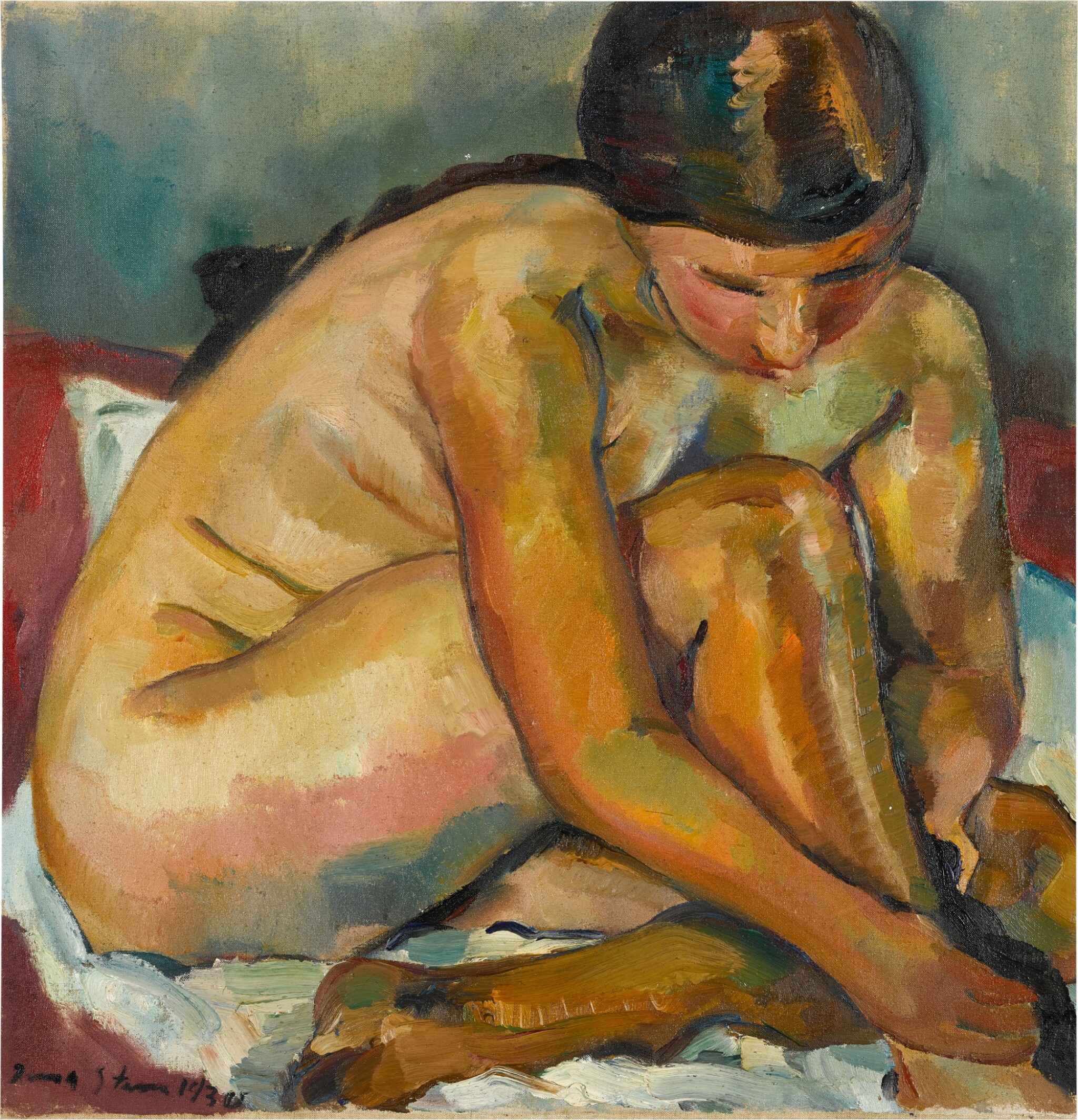 There is a faint crack to the paint surface measuring approximately 40mm. long within the lower left corner of the work as well as some minor cracking networks along the lower right hand edge, starting approximately 120mm. from the lower right corner. There are also a handful of small scattered minor cracks within the sitter's body (mainly on her back and legs). All of the above appear stable and are only visible on close inspection. Inspection under UV light shows some possible retouching to the centre of the right hand edge, an area measuring approximately 100mm by 10mm. Overall, the work appears to be in very good and stable condition.

South African artist Irma Stern’s nudes may be seen as a response to a subject that traditionally was made by and for men. And, at some level, Stern’s nudes undoubtedly reflect her understanding of herself as a woman and her attraction to early feminist thought.

The present lot is similar and, although smaller, obviously part of the same series as a Bather of 1930 in the collection of the Irma Stern Trust and shows that Stern actually composed the Bather in the studio and then transferred her to a landscape background. See Godby, 2021, p.79, Fig. 5:5.

A major figure in modern South African Art and one of the most sought-after female artists on record, Irma Stern is known for her bold use of colour, exaggerated distortions and heavy contours, all of which point to the strong influence of the German Expressionists on her work.

Born in Transvaal to German-Jewish parents, Stern spent her childhood in South Africa before moving to Europe with her family in 1913 where she began her formal art training. A pivotal meeting came in 1916 when she met Max Pechstein, a key champion of her work who introduced her to the gallerist Wolfgang Gurlitt. The publication by Gurlitt of Stern’s lithographic series Dumela Morena Bilder aus Afrika in 1920 cemented her connections with the German Expressionist circle.

Stern’s training in Berlin at the Weimar Academy and the Levin-Funcke Studio included the academic tradition of the nude, but this idealised image was soon challenged by the Expressionists, who argued that women were not simply passive objects of beauty but should be understood to be active, even disruptive forces in society. Stern adopted this radical new approach. Like her German counterparts, Stern challenged traditional ideals of beauty insisting on physical realism. Like other expressionists she followed Freud and represented female sexuality as a newly recognised disruptive force in society.

We are grateful to Prof. Michael Godby for his assistance in cataloguing this lot.