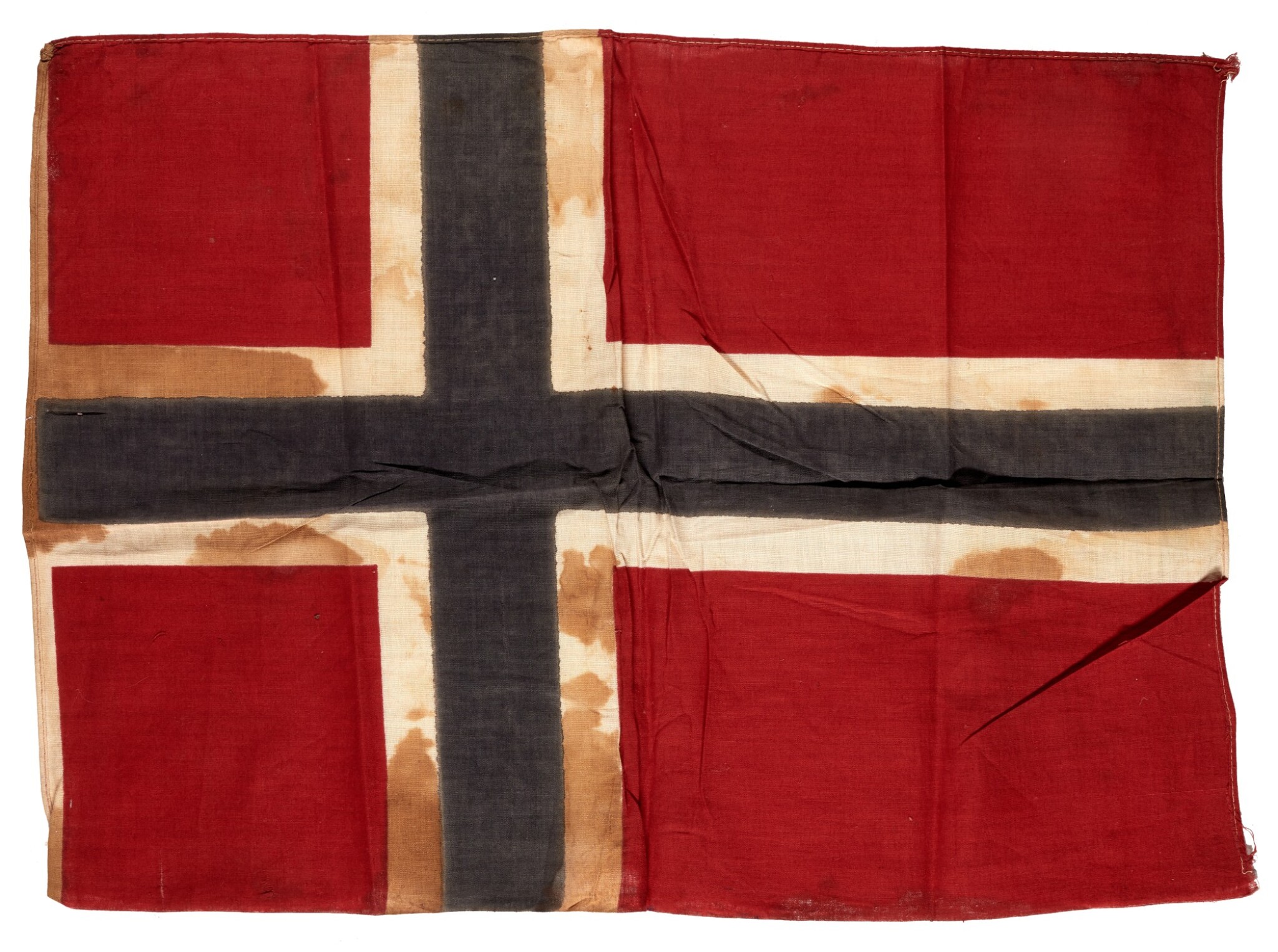 A Norwegian flag which acompanied Amundsen on his polar expeditions, and was later given to Fridtoj Nansen's nephew Einar Nansen, accompanied by a letter of provenance by Gustav S. Amundsen dated 9 May 1935

﻿WITH: autograph letter signed by Gustav S. Amundsen to Einar Walther Nansen on Roald Amundsen's headed-paper, stating in Norwegian that "I hereby confirm that this is one of the small flags that Roald Amundsen brought with him during the sailing of the North western sea route, on his way to the South Pole, during the sailing of the North eastern sea route, and under the 'Amundsen-Ellsworth-Nobile Transpolar Flight' in 1926. Heggeli, 9 May 1935. Gustav S. Amundsen"

A NORWEGIAN FLAG THAT ACCOMPANIED THE EXPLORER ROALD AMUNDSEN ON HIS POLAR EXPEDITIONS, INCLUDING HIS VOYAGE TO TRAVERSE THE NORTH WEST PASSAGE IN 1903-06; HIS JOURNEY TO THE SOUTH POLE 1910-12; HIS VOYAGE TO THE NORTH EAST PASSAGE 1918-22, AND ON THE AMUNDSEN-ELLSWORTH-NOBILE CROSSING OF THE ARCTIC AND FLIGHT OVER THE NORTH POLE IN 1926.

Information from the Roald Amundsen house at Uranienborgin, Oslo, states that Amundsen took twelve of these flags with him on his expeditions and later gave them to close friends, family and notable figures including King Haakon VII, Hjalmar Riiser-Larsen and Fritz Gottlieb Zapffe (now at the Polar Musuem in Tronso).

Gustav Amundsen, Roald's brother, was given the present flag; he died in 1930, and Gustav's son, also named Gustav, and affectionately nicknamed 'Goggen', gave this flag with a letter of provenance in 1935 to Einar Walther Nansen.

Another of these flags presented by Gustav S. Amundsen to the person who established the Roald Amundsen Museum was sold in these rooms on the 7 May 2009, lot 222.