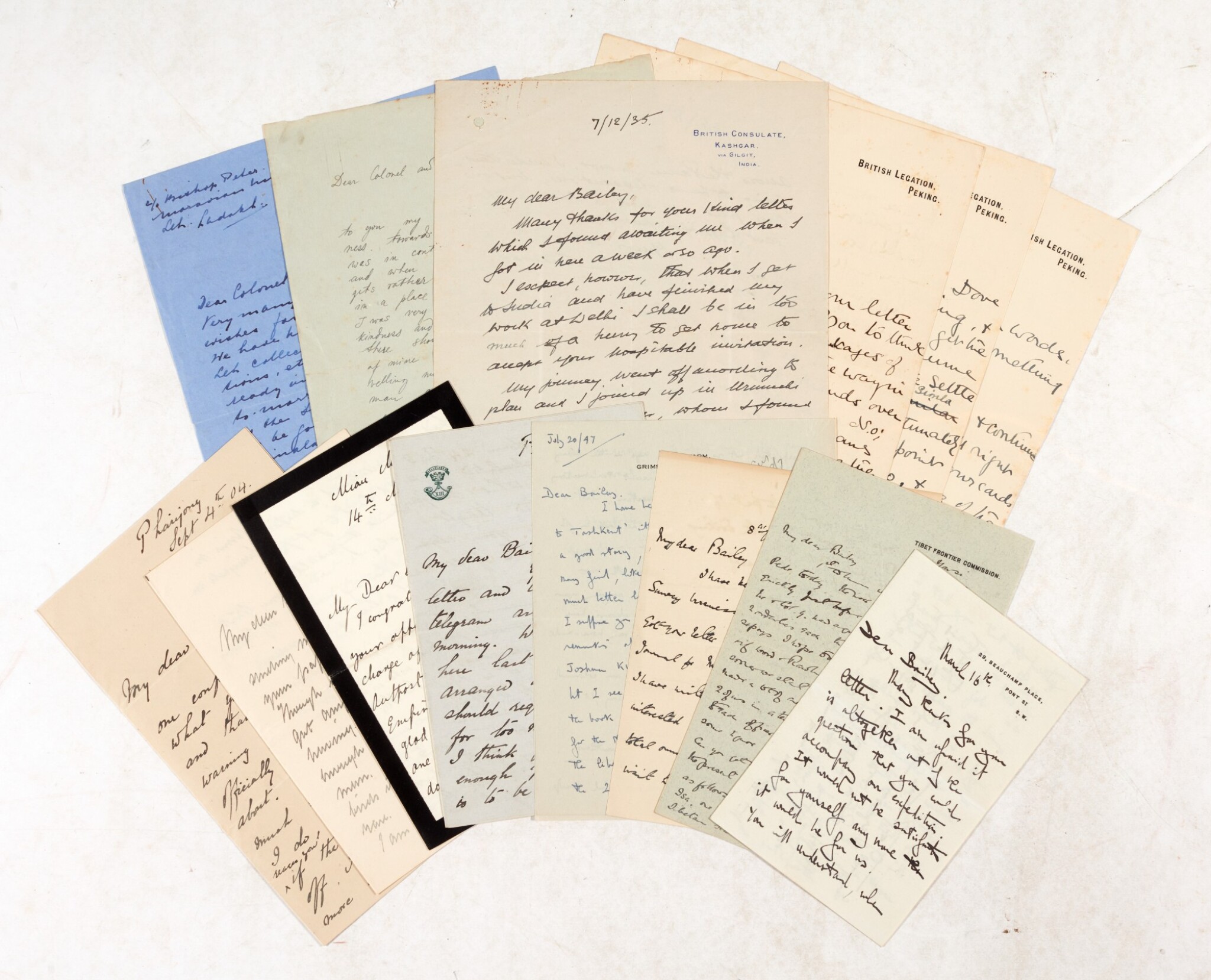 Letters and postcards to Colonel Bailey, including letters relating to Tibet and the Younghusband expedition, 1904-1947

12 letters and a postcard to Colonel Frederick Marshman Bailey, by:

Douglas Carruthers (2), regretting that he cannot take Bailey with him on his next expedition (circa 1910), and praising his mission to Tashkent, lamenting that "the libellous story of our shooting of the 26 komissars still survives", and explaining that his "book is held up, because there are colour plates" (July 1937);

Brigadier-General Cecil Godfrey Rawling (2), discussing his forthcoming expedition to Gartok: "...The expedition should prove most valuable... Gartok is already the centre of a large local trade, and has I believe only once been visited by a European many years ago..." (September 1904);

W.G. Ottley, asking Bailey to confirm that Ottley will not be prevented from entering Tibet by writing back to say "what horse won the Derby";

Sir Eric Teichman (2), one written at his dictation by his wife, due to his having taken "a bad toss off a poney [sic]", discussing the possibility of a tripartite settlement with the Chinese, the other commenting on his forthcoming journey across the Pamirs;

together with 3 other letters, a postcard, and 6 envelopes (3 addressed to Bailey in Tibet when he was with the Younghusband expedition to Lhasa and when he was British ''trade agent'' (intelligence officer) at Gyantse);

''Eric [Bailey] was an invincibly modest man and his unusual talents were concealed beneath the gentlest of exteriors... [he] had marched to Lhasa with Younghusband; had explored single-handed the borderlands of India and Tibet and the sources of the Brahmaputra; had done battle with strange tribesmen and negotiated with weird native dignitaries; had given his name to Meconopsis Baileyi, the celebrated Himalayan blue poppy, as well as to a whole bevy of exotic beasts, butterflies and birds; had, with a price on his head, completely outwitted and out-manoeuvred the Soviet Security Police in and around the Emirate of Bokhara; and finally ended his official career as British Minister at the Court of Nepal.'' (Fitzroy MacLean's introduction to Swinson's Beyond the Frontiers. The Biography of Colonel F.M. Bailey, 1971).