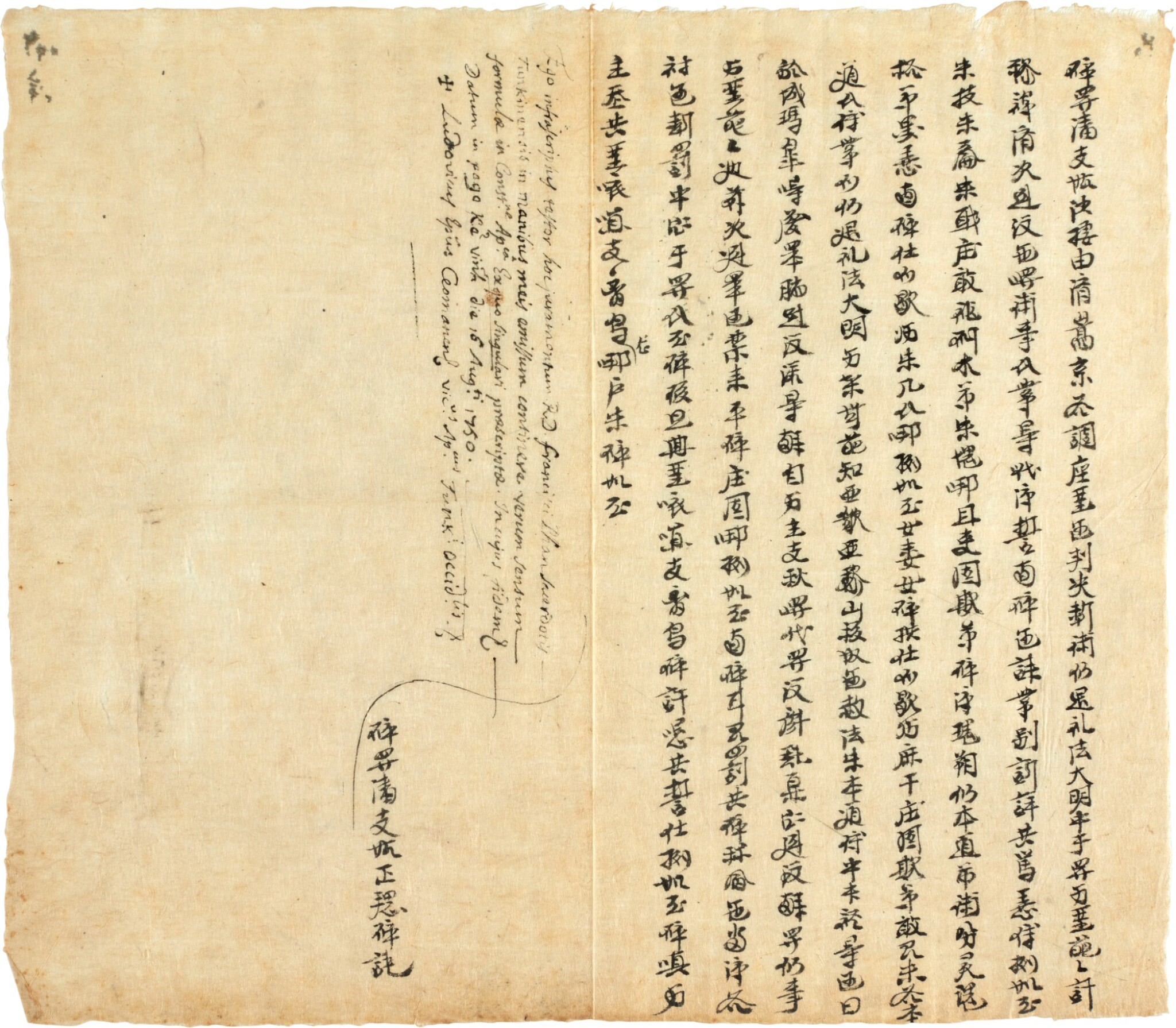 in accordance with the Papal Bulls 'Ex Illa Die' of March 1715 and 'Ex Quo Singulari' of July 1742, signed by Austrian, French, Bohemian, Portuguese and Chinese missionaries in China, Siam, Tibet, Japan and India, many of the signatures witnessed by the Bishops of Peking or Macao, attesting that the oath had been sworn in his presence ('in manibus meis'), the great majority of the oaths fully autograph ("manu propria"), chiefly in Latin but some in vernacular languages including Chinese and Vietnamese, with a few items of related correspondence and notes, upwards of 300 pages, various sizes, on Western paper and rice paper, c.60 pages bound in Middle Hill boards (one volume, folio), the remainder loose in a series of ten folders, 1710-59, some letters torn with lose of text

AN IMPORTANT RECORD OF CHRISTIAN ACTIVITY IN CHINA IN THE EARLY EIGHTEENTH CENTURY, RELATING TO A FASCINATING MOMENT IN EAST-WEST RELATIONS WITH THE CONDEMNATION OF CHINESE RITES BY POPES CLEMENT XI AND BENEDICT XIV. FROM THE COLLECTION OF SIR THOMAS PHILLIPPS.

The Papal Bulls of 1715 and 1742 decreed that local rites of Christianity, developed during the early years of the Jesuit mission to the East in accommodation of local customs, should not be tolerated or even discussed. This collection of documents provides a valuable additional source for the biographies of individual missionaries working in the East during the eighteenth century, as they signed their oaths. Despite their opposition to the Papal decrees, about a third of these three hundred oaths are sworn by Jesuits, many of whom are listed by Dehergne or Pfister: they include Emmanuel and Joseph Aguiar, Jean Barborier, Valentin Chalier (a horologist and maker of automata, 1697-1747), Jean-Gaspard Chanseaume, Joseph Neugebauer, Johann Gruber, Johann Siebert, Jean-Baptiste De La Roche, José Espinha (an astronomer), Emmanuel Diaz, and Antoine Gaubil (for whom see lot 93).

This collection also includes the oaths sworn by members of other orders, notably the Franciscans, the Augustinians, and the Capuchins. Some were no doubt repudiating the 'Malabar' as opposed to 'Chinese' Rite which was similarly proscribed as practiced by the Jesuits working among the castes of southern India. There is also a contemporary file copy of the letter written to the Pope by Teodorico Pedrino (1671-1746), musician and missionary, detailing his audience with the Emperor Kangxi in which he describes the reception of the ban on Chinese rites (dated 20 October 1714).