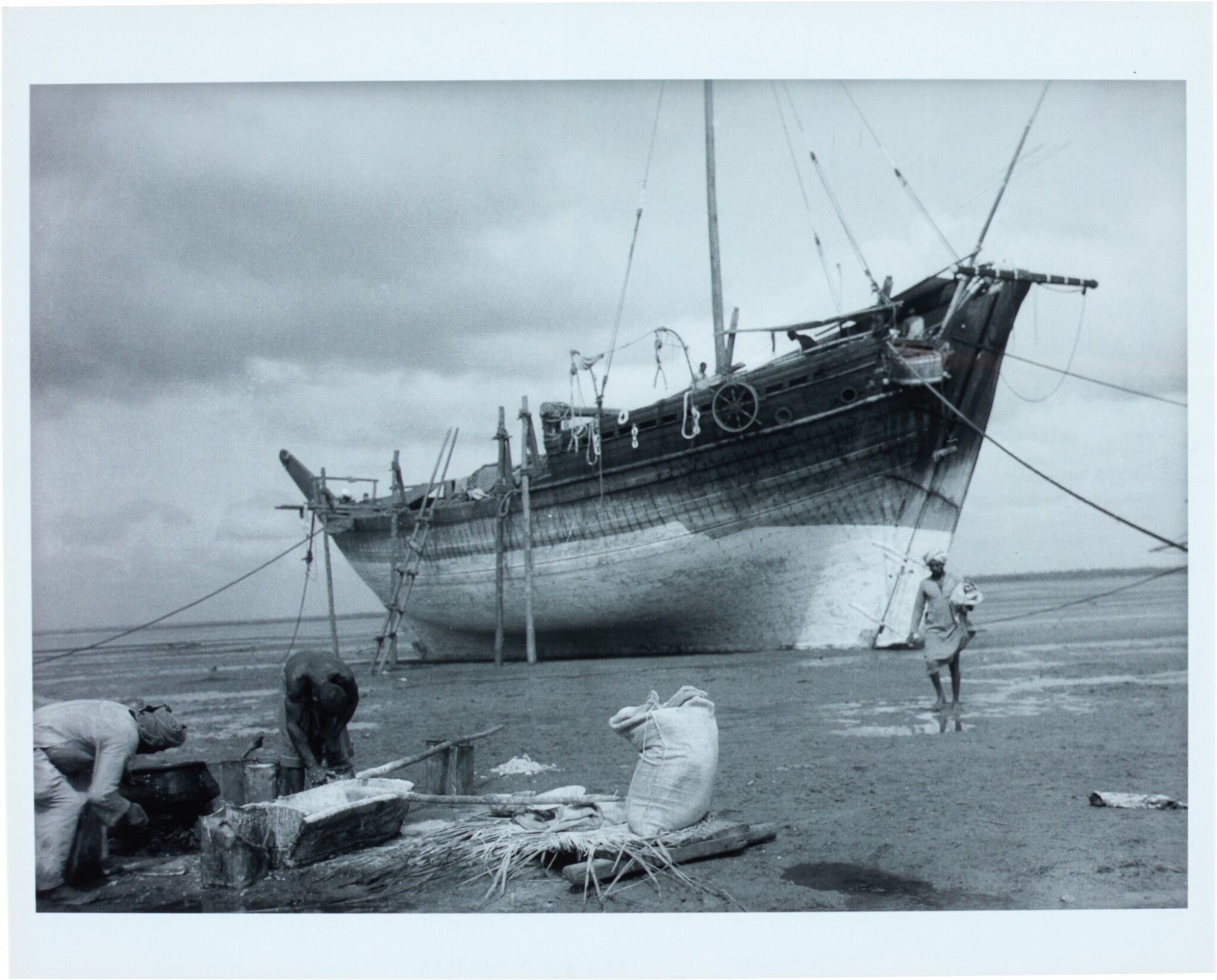 A collection of eighty-four photographs of a voyage from Kuwait to East Africa, 1938-39, via Bahrain and Oman

84 silver prints (255 x 200mm., or the reverse), printed later from the original negatives, each with manuscript caption and label on the reverse with National Maritime Museum catalogue number, preserved in modern ringbinder, a few photographs with minor stains

In 1938-1939, Australian writer and adventurer Alan Villiers (1903-1982) joined the crew of a Kuwaiti dhow as it travelled to East Africa. Trading to Mombasa, Zanzibar and the Rufiji Delta, the vessel made its way back to Kuwait, stopping at Oman and Bahrain en route. Villiers immortalised the voyage in Sons of Sindbad (1940), his classic of Arabian travel. See also lots 80 and 81.

The photographs cover Aden, the coast of East Africa, Zanzibar, the Rufiji Delta, the Hadramawt coast, Oman, Kuwait, and document the arduous activities of sailing, dhow building, and pearling in the Gulf. These fine prints were made from the original negatives preserved in the Villiers Collection at the National Maritime Museum, Greenwich.

These photographs were published in Sons of Sindbad: the Photographs, 2006, edited by William Facey, Jacoub Al-Hijji, and Grace Pundyk.

7. The palace of the na’ib of Shihr. Shihr, along the coast east of Mukalla, had known better days when Villiers visited it. 2 copies. (PM 5423/13)

8. Nejdi (right) and the mate, Hamed bin Salim, check passengers from Hadhramaut crowded on board the Triumph. (PM 5332/21)

14. Villiers was astonished at the strength and agility of the Kuwaiti sailors, who needed no footropes for their work aloft. (PM 5033/15)

15. On the halliards: hauling up the mainsail of the Triumph of Righteousness. (PM 5391/9)

18. A small boom from the Batina coast of Oman, like the Triumph unable to let its passengers go ashore at Mogadishu. (PM 5193/4)

20. Said, from the port of Sur in eastern Oman, was one of the “smugglers” on board who kept up the age-old tradition of petty trading down the East African coast. (PM 5440/14)

22. A transom-sterned sambuk, from Sur in eastern Oman, leaves Mogadishu for the voyage south. (PM 5197/25)

28. The Triumph of Righteousness beached for cleaning at Kwale Island. (N 83088)

34. Hoisting the yard: on the voyage back from the Rufiji the sailors had to work on a deck packed with mangrove poles. (PM 5015/30)

37. With the Triumph packed to the gunwales with mangrove poles for the voyage home to the Gulf, her crew had to sleep where they could. (PM 5067/37)

41. Happy to be homeward bound, her sailors drum and sing the Triumph of Righteousness into Mutrah harbour. One of the two serangs or boatswains is on the left. (PM 5177/21)

42. Mutrah harbour crowded with the distinctive Omani badans, with their detachable rudders, used for fishing and coastal trade. (PM 5098/9)

44. The fine carved stern of one of the three surviving Kuwaiti baghlahs, drawn up for overhaul on the Kuwait waterfront. (N 83090)

50. With the discovery of oil in 1936, these Kuwaiti boys were destined for easier livelihoods than dhow sailing and pearl diving like their fathers. (PM 5054/8)

51. His Highness Shaikh Ahmad bin Jabir Al-Sabah, ruler of Kuwait, relaxes on board his steam yacht with the British Political Agent in Kuwait, Major A. C. Galloway. (PM 5236/20; V35/19)

52. On the pearl banks of the northern Gulf: a Kuwaiti pearling sambuk anchored with sweeps out, divers in the water, and haulers at the ready. (PM 5417/16)

57. Abdullah Al-Hamad, a member of the Kuwaiti merchant house that gave Villiers so much help. (N 83225)

83. Beduin family in front of their tent: three men and three children smiling for the camera, Kuwait 1939. (VIL/KUW/5g)

84. Alan Villiers with a group of Kuwaiti men and boys, Kuwait 1939. Villiers wears traditional dress, together with sword and silver-mounted dagger (khanjar). (N 83232)