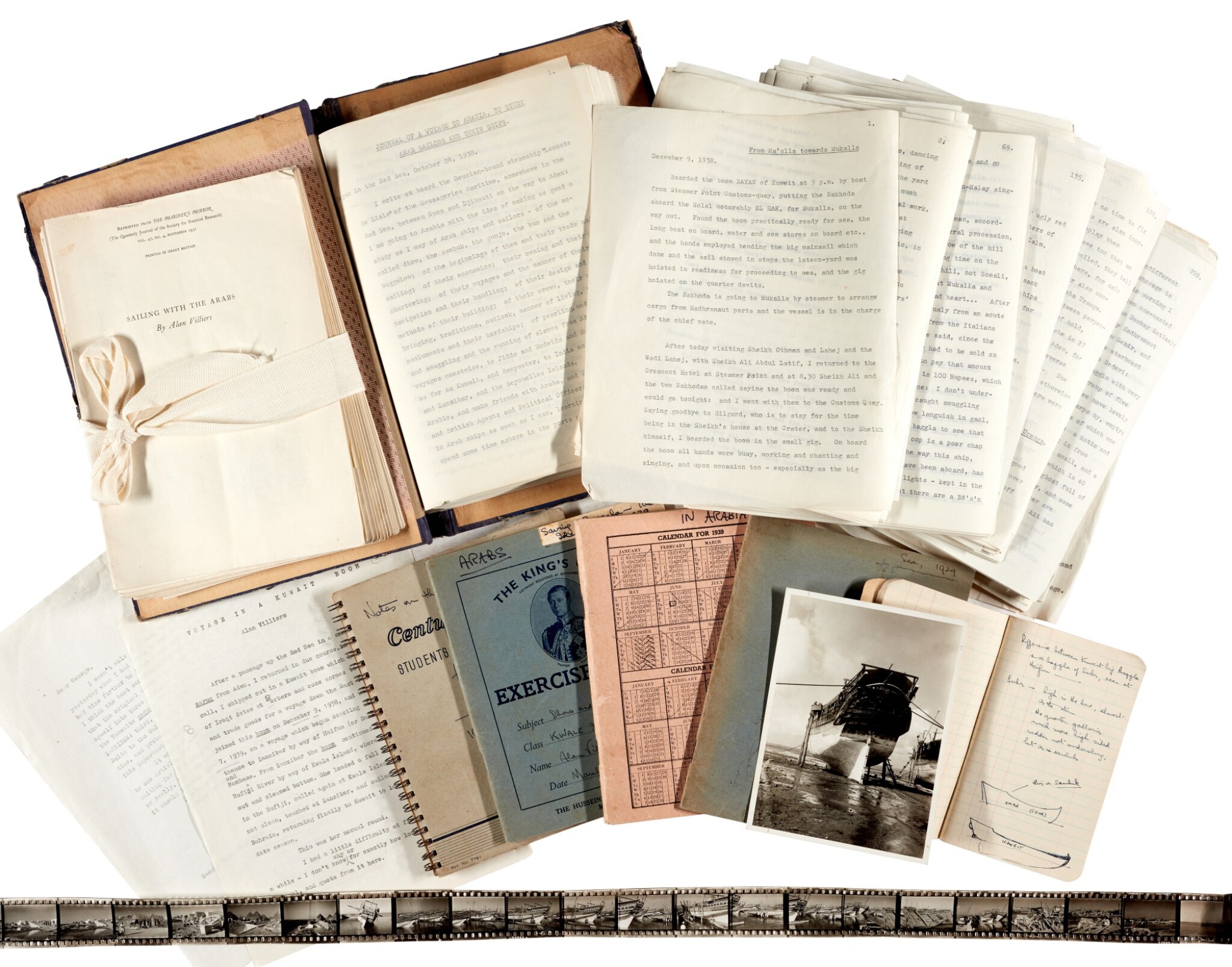 i) Notebook, comprising writerly details of shipboard life (“…The morose cook, in abbreviated pantalons and black shirt, who never changes his cloths – he works hard, from daylight to dark, under conditions of the greatest difficulty: in smoke, ashes, dirt; people messing round – his dishes of the simplest, rice & fish, but on occasion he can turn out a feast…”), technical notes on Arab sailing ships, and personal notes, 68 pages, with, from the reverse, notes on Arabic vocabulary, 6 pages, altogether 74 pages, plus blanks, 8vo, dated at end “Alan Villiers | Crescent Hotel | Steamer Point | Aden | Arabic | Begun November 4, 1938”, soft red cloth

ii) Notebook, entitled “Dhows and General” on the upper over and additionally headed “Saving a Baggala – The Idea 1939”, with notes from his voyage on the Bayan, the crew, the ship, vignettes of life at sea, and writing projects, c.32 pages, plus blanks, small 4to, printed blue-green wrappers (“The King’s Own Exercise Book […] The Husseini Stationery Mart, Mombassa”), dated on cover March 7 [1939], with related notes loosely inserted

iii) Notebook, labelled “Sea, 1939 | Kuweit”, with dated notes on Kuwaiti history and culture (“…In Kuweit there is an queer belief that if a barren woman jumps over the keel of a building boom, she will conceive: but one of the carpenters building the ship, or the Nakhoda himself when she has sailed, will pay for the new life with his old. Ali says he had 20 people constantly watching the Bayan at night throughout the building, to prevent the barren wives from jeopardising his life…”), 30 pages, plus blanks, small 4to, blue-green wrappers, April-July 1939

iv) Notebook, labelled “In Arabia 1939” on upper cover, titled “Articles, Suggestions, Outlines, Ideas”, comprising headed notes with summaries of articles and other writings, with, from the reverse, notes on a day spent in harbour “Information | At Fao 18/9/[1939]”, altogether c.35 pages, plus blanks, small 4to, printed pink wrappers (“Calendar for 1939”), 1939-40, with additional notes loosely inserted

v) Notebook, labelled “Notes on the Cochrane (proposed) Book – not written And Some Arab Notes 1937-38”, mostly comprising notes on Admiral Thomas Cochrane but also with notes on the Red Sea and on dhows (including costs), partially in shorthand, c.64 pages, plus blanks, small 4to, spiral bound in stiff grey printed card, 1937-38

vi) Typescript diary of Villiers’s voyage on the boom Bayan, dated entries from 9 December 1938 to 7 June 1939, with notes and key for appended plans (not present) of the ship and its rigging, 478 pages, large post 4to, loose

vii) Typescript entitled “Journal of a voyage to Arabia, to study Arab Sailors and their ships”, begun in the Red Sea, 28 October 1938, with scattered markings to final leaves, 245 pages, large post 4to, bound in stiff blue cloth

ix) ‘Sailing with the Arabs’, offprint from the Mariner’s Mirror, 1951, bundles of 18 copies

A UNIQUE RECORD OF THE LAST DAYS OF TRADITIONAL ARAB SAILING SHIPS, AND OF KUWAIT IN THE 1930s. Alan Villiers (1903-82) was an experienced and adventurous sailor and writer, who in the mid-1930s had circumnavigated the globe in his own sailing ship. In December 1938 he took passage in Aden on a traditional Kuwaiti boom (a medium-sized form of dhow) called the Bayan, translated by Villiers as Triumph of Righteousness. The Bayan sailed through the Gulf of Aden then down the East African coast to Mombasa and Zanzibar, taking on a cargo of mangrove poles in the Rufiji Delta, and then returning to the Gulf, reaching Kuwait in June 1939. Villiers immersed himself in shipboard life, learning about Arab sailing culture, traditions, and navigation techniques, as well as taking an important series of photographs (see lot 81). The current lot comprises his surviving notes as well as a later typescript of his diary, the original of which is not known to survive, and an unpublished typescript of his journey from Marseille to Aden and onward on the Bayan. Villiers's published account of his months on the Bayan was published as Sons of Sinbad (1940). See also lot 80.