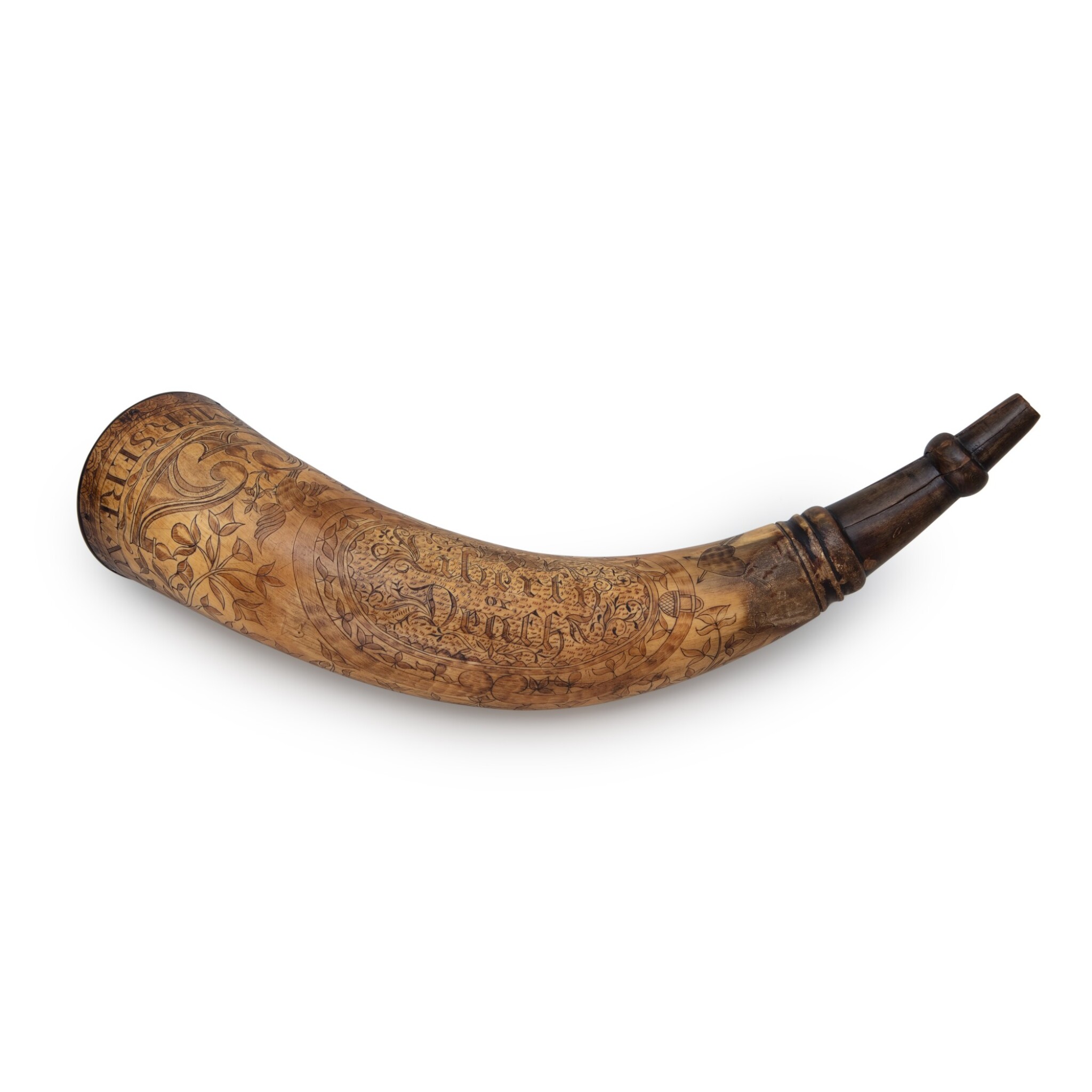 Fully engraved with an all-over foliate design centered around the Liberty or Death edict and 1776 date on reverse; interspersed with birds, an arrow pierced heart, axe, sword, and scroll pediment motifs and the name JACOB MERSEREAU along the base edge of the large horn.

In overall fine condition. 2 inch by 1 1/2 inch burn mark near the spout end which slightly overlaps with a part of the heart and a leaf tip design. But none of the major decoration is affected. Some cracks to the spout commensurate with age.

At the Second Virginia Convention of 1775, Patrick Henry’s proclamation “Give Me Liberty or Give Me Death” was the symbolic battle cry that swung the vote in favor of sending Virginian troops to fight for American independence, and the echo of these powerful words quickly reverberated throughout the country, becoming the decree of the Revolutionary War and a badge of honor proudly engraved on the powder horns of many impassioned soldiers across the burgeoning nation. This impressively large and exceptionally carved and engraved, honey-colored steer horn, belonged to an American patriot of equal bold character; Colonel Jacob Mersererau (1730 –1804) of Staten Island, New York.

The Mersereau family, including brothers Joshua, Jacob, and John, and Joshua’s son, John La Grange, were General George Washington’s leading espionage network from as early as 1776, supplying him with vital information of the strength of the British army, troop deployments, and invasion plans from behind British lines on Staten Island and in parts of New Jersey.1 Before the war, brothers Joshua and John ran a leading tavern and stagecoach named the “Blazing Star,” which ran locally between today’s Port Richmond Avenue and Rossville neighborhood on Long Island, as well as to Philadelphia. John introduced the first post coach into the country from England.2 Jacob had purchased an old stone house, the John Roll homestead, nearby in 1762.3 When the Revolution emerged, Staten Island was widely regarded at the time as a nest of Tories, partly due to the mass migration of British troops there after they were driven out of Boston. The British troops promised protection to those who remained peaceably loyal to the crown, but these promises fell short with periodic looting, destruction of property, and harassment of the citizens of Staten Island.4 In July of 1776, Joshua Mersereau’s Staten Island property was destroyed by the British and he narrowly escaped; first to Manhattan and subsequently to New Brunswick, New Jersey. John had released the stagecoach horses in service of the American army and he and Jacob also narrowly escaped to New Jersey.5

While retreating through New Jersey, George Washington requested that Joshua Mersereau’s son, John La Grange, a nineteen-year-old boy at the time, stay behind on Staten Island to act as a spy. The boy developed a cunning system of covertly conveying information to his father and possibly uncles, who acted as intermediaries on Washington’s behalf. John La Grange would commit the intelligence to paper and store it in a weighted bottle, which he would tow behind him on a makeshift raft to Shooter’s Island, located between Staten Island and the New Jersey Shore. If captured, he would simply cut the string and the weighted bottled with incriminating evidence would sink. If he reached the island, he would hide the bottle under a rock and light a signal fire when he returned to the Staten Island shore to notify his correspondences in New Jersey that the written information awaited.6 The young Mersereau was perhaps the most covert spy while the rebellious political positions of Joshua, Jacob, and John were well known. This would explain why Jacob had a horn proudly displaying his patriotic beliefs.

Despite being an outspoken rebel, Jacob’s home surprisingly remained intact with his wife and children continuing occupancy while he was in New Jersey. There are several accounts; however, of the Colonel making stealthy trips at night to visit his family, and one famous story of his near capture. Having crossed the Sound and concealing his boat, he avoided roads as much as possible, but inevitably ran into a young man who, unbeknownst to Mersereau, turned out to be a loyalist. By the time the loyalist informant reached the nearest British outpost at Richmond and British troops assembled and traveled to Mersereau’s home, it was morning and the Mersereau family had noticed the troops approaching the front door. While his wife greeted the officers, the Colonel escaped through an upstairs window and fled towards a hill. With the British soldiers spotting him on the hill and rushing in pursuit, he escaped to the other side, which terminated in a swamp. The Colonel purportedly hid for an entire day in the middle of the swamp, and the British dogs that were on his scent became distracted by the scent of rabbits instead.7

The Mersereaus were later regarded as the founders of American Intelligence and indispensable to the Revolutionary War in various ways. This Revolutionary War period horn uniquely combines a quintessential early American folk art aesthetic with the impassioned motto Liberty or Death, serving as a reminder of the utopic vision, optimism, and bravery of America's first patriots.