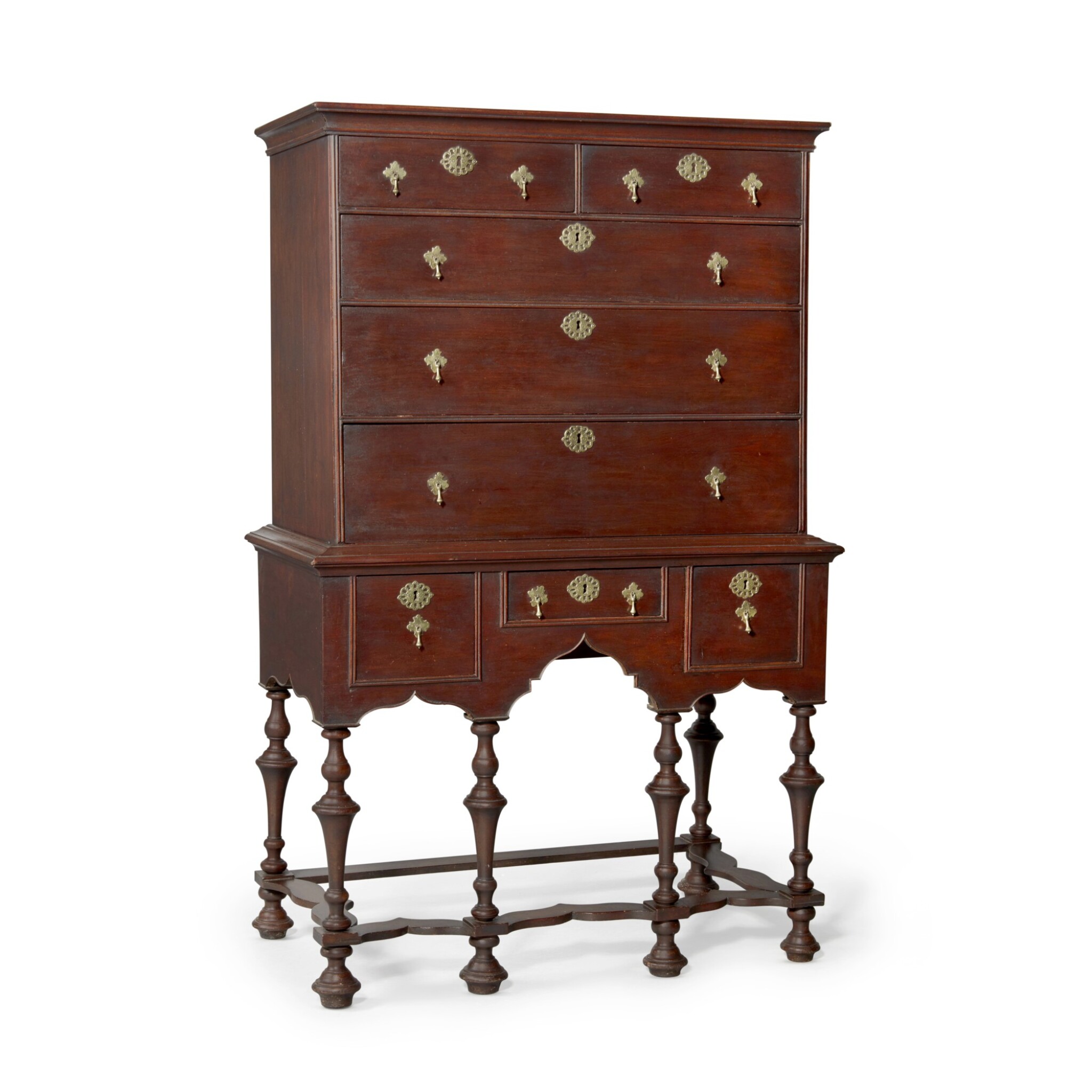 Retaining its original cast brass escutcheons and drop handles, this walnut high chest of drawers descended in the Richardson family of Philadelphia for over 200 years and may have been owned by Joseph Richardson, Sr. (1711-1784), the Philadelphia silversmith. It is attributed to John Head (1688-1754), the Philadelphia cabinetmaker, and is the first intact high chest associated with him to come on the marketplace in many years.

In 1929, Mary Seaman illustrated this high chest in Thomas Richardson of South Shields, Durham County, England and his descendants in the United States of America as in the possession of Elizabeth Randolph Richardson Howell (1869-1928) and having “stood in the house of Joseph and Ruth Hoskins Richardson in Germantown, and the drops shook during the entire Battle of Germantown.”1 Joseph Richardson, Jr. (1752-1831) and his wife, Ruth Hoskins (1756-1829), married in 1780. They likely inherited the high chest from his parents, Joseph Richardson, Sr. and his wife Mary (Allen) (1716-1787) who married in 1748. Joseph Richardson Jr. worked as a gold and silversmith in Philadelphia. He was in partnership with his brother, Nathaniel Richardson (1754-1827), from 1785 to 1791 in the firm of Joseph and Nathaniel Richardson. Later, he worked in partnership with James Howell as Richardson & Co. On December 12, 1795, George Washington appointed him Assayer of the Mint and he held that position until his death in 1831. Joseph Jr.’s son, John Richardson (1790-1866), likely owned the high chest next. He married Martha Gibbons in 1835. John succeeded his father as Assayer of the Mint, being appointed by Andrew Jackson on March 21, 1831. He was a book dealer in Philadelphia.

The high chest descended to John and Martha’s son, Dr. Joseph Gibbons Richardson (1836-1886), and his wife Mary Randolph Parry (1841-1916) of Philadelphia. Dr. Richardson worked as a physician in Philadelphia and specialized in microscopic research, blood analysis and hygiene. Their daughter, Elizabeth Randolph Richardson Howell, inherited the chest from her parents. At her death, it descended to her daughter, Josephine Randolph Richardson Howell (1904-1947) of Philadelphia. She sold it to Robert “Bob” S. Stuart of Chestnut Hill, Pennsylvania in July of 1946 for $2,425 along with the 1705 marriage certificate of Francis Richardson II (1684-1729) and Elizabeth Growden (d. 1714), the parents of Joseph Richardson Sr., that was also in her possession.2 The dressing table also offered in this sale descended through the Richardson family to Mary Randolph Richardson (b. 1877), daughter of Dr. Joseph and Mary Richardson, who married Henry Dow Grey (b. 1880) in 1917. The dressing table was purchased by Bob Stuart from the sale of Mary Grey’s effects held in Roanoke, Virginia in June of 1957. Robert Stuart later sold this high chest, dressing table and marriage certificate to Bill DuPont.

This high chest is illustrated by Jay Stiefel, in The Cabinetmaker’s Account: John Head’s Record of Craft & Commerce in Colonial Philadelphia, 1718-1753 (Philadelphia: American Philosophical Society Press, 2019): fig. 11, pp. 175-177. He notes that though no documentary evidence survives linking this chest to Head’s shop, it can be confidently attributed to him on the basis of close similarities to the Caspar Wistar walnut high chest and en suite dressing table that are documented to Head and appear in his account book under the date of April 14, 1726.4 The Wistar pieces are in the collection of the Philadelphia Museum of Art and may have been made as part of the dowry furniture of Catherine Johnson (1703-1786) of Germantown for her marriage to Caspar Wistar on May 25, 1726. Caspar Wistar and Joseph Richardson, Sr. were neighbors on Front Street in Philadelphia. The Richardson chest has two drawers in its top tier rather than three but it is otherwise constructed in the same manner as the Wistar high chest with an arched apron and turnings of the same design. A chest of drawers attributed to Head and illustrated by Stiefel has its original cast brass escutcheons and drop handles with back plates of the same pattern as those on the Richardson high chest.5 Another related walnut high chest of drawers attributed to Head is in a private collection. It is of the same form as the Wistar and Richardson chests and displays two drawers on the top tier like this high chest.6

A similar dressing table attributed to John Head with a history in the Morris family of Philadelphia is in the collection of the Philadelphia Museum of Art.7 Another nearly identical example attributed to Head was sold in these rooms, Important Americana, January 31, 1987, sale 5551, lot 1318 and again in Important Americana: Furniture, Folk Art, Silver, Porcelain, Prints and Carpets, January 25-6, 2013, sale 8950, lot 340.

2 This transaction is recorded in an insurance claim that Robert Stuart submitted in 1967. See Robert Stuart papers, Bill DuPont files.

3 Sotheby’s would like to thank Jay Stiefel for sharing this information and for providing copies of Bob Stuart’s correspondence. Bob Stuart had been notified about Mrs. Grey’s sale by Mr. T. D. Hobart, Jr., of Roanoke. The four side chairs were lots 916-919 in the sale. They were described as “Set of four Queen Anne side chairs owned by Joseph Richardson @ 100 each.” They sold for $400. The Richardson family dressing table was lot 921 in the sale and it sold for $40.

4 Jay Robert Stiefel, The Cabinetmaker’s Account: John Head’s Record of Craft & Commerce in Colonial Philadelphia, 1718-1753 (Philadelphia: American Philosophical Society Press, 2019): 175. Joseph Richardson Sr. did not have an account in John Head’s account book. His brother, Francis Richardson, Jr. (1705/6-1782), a silversmith and clockmaker in Philadelphia, had an account with John Head but did not purchase any chests or tables from Head. For the Wistar chest and dressing table, see fig. 16.2, p. 155.