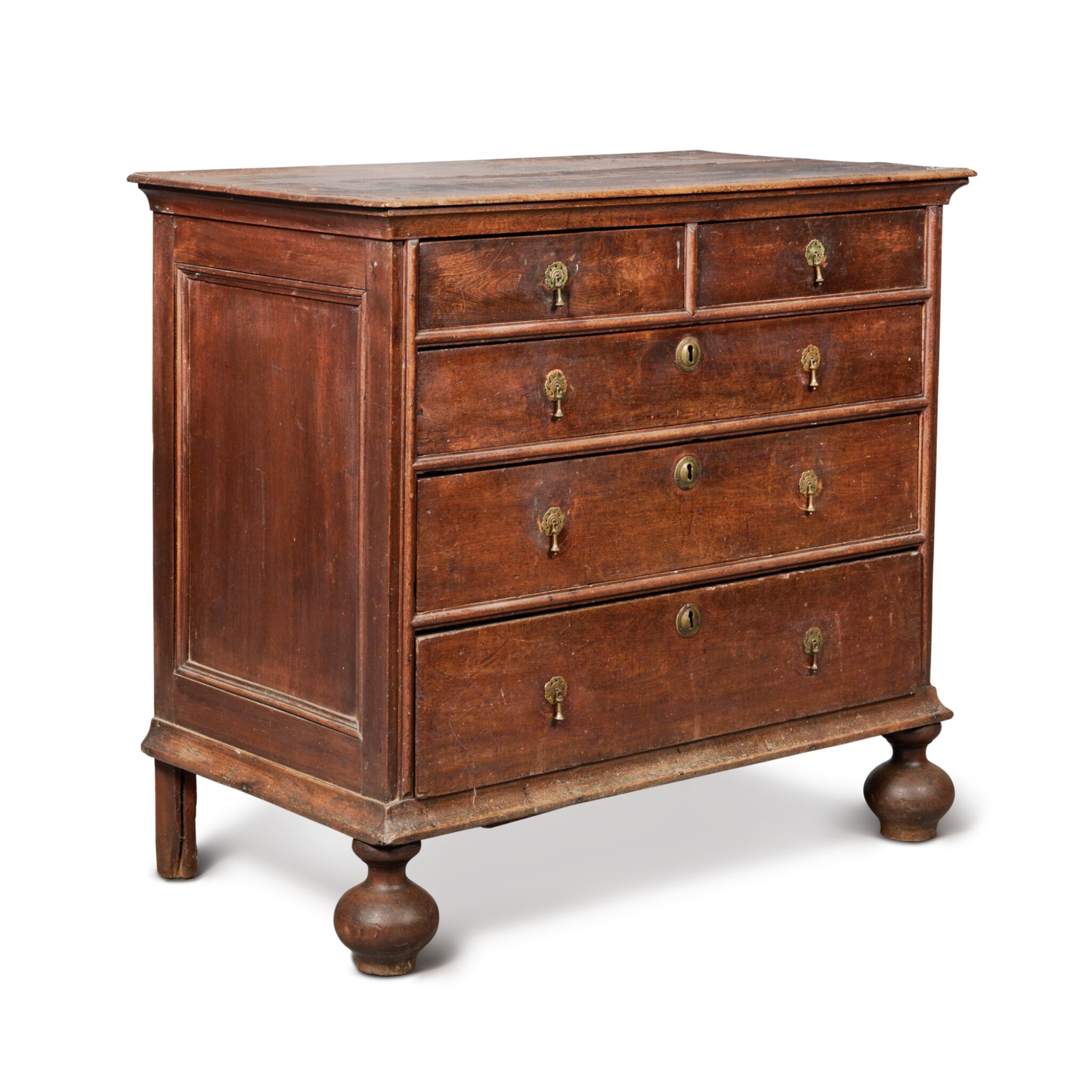 Appears to retain its original surface. Inscribed in script chalk on interior proper left of paneled side William Beake 171?

Secondary woods: yellow pine and Atlantic white cedar. Top drawers have broken Quaker locks which are present. The brass pulls appear to be replaced however the escutcheons appear to be original. The top long drawer lacking interior lock.

Please note that the brass pulls are likely replaced.

Descended in the England family of Chester County, Pennsylvania;

Signed and dated by its maker, this chest of drawers is an extremely rare and important document of Philadelphia furniture that survives with its original surface and cast brass hardware. Inscribed in chalk on the inside panel of the case, “William / Beake 171?”, it was made by William Beakes III (1691-1761), one of the earliest joiners working in Philadelphia in the eighteenth century. The early history of the chest is unknown before it was owned by Harry Roland (1868-1937) and Carrie England (1884-1911) of Chester County, Pennsylvania in the late nineteenth century. It remained in the England family until 1970, when it was sold at Whiteside Auctions in Oxford, Pennsylvania.

Born in Bucks County, Pennsylvania in 1691, William Beakes III was the son of William Beakes II (1663-1711) and his wife, Elizabeth Worrilow (1671-1705), who married at the Philadelphia Meeting of Friends in 1690. William Beakes I (d. 1687), his grandfather and namesake, purchased land from William Penn and emigrated from Blackwell, County Somerset in 1682 and founded with other Quakers the first meeting of the Society of Friends at Falls Township, Pennsylvania. In 1694, William Beakes II purchased land in Nottingham Township, Burlington County, New Jersey and moved his family there. In 1705, William Beakes III began his apprenticeship in Philadelphia with William Till (1676-1711), a distant relative and recent émigré joiner from Staffordshire, England. He completed his apprenticeship in 1711, the year that Till died. After his father’s death the same year, he inherited a house and lot in Philadelphia where he may have lived for a time before selling them in 1713. His name was included on a list of woodworkers and other individuals working in allied trades in Philadelphia before 1722.1 He moved to Burlington County, where family members had become established in a prosperous Quaker community and were active members of the Chesterfield (Crosswicks) Meeting.2 By 1748, he had relocated to Upper Freehold, Monmouth County, New Jersey, where he was listed as freeholder in the colony.3 He died in Upper Freehold in 1761 and identified himself as a joiner in his will. His estate inventory included a “pare of Chestardraws, Joyners tools & other things” in the large front chamber and valued at 23 pounds 19 shillings.

In 1720, William Beakes III made his only documented commission -- a chest of drawers for Sarah (Foulke) Thorn (1702-1774), a resident of Chesterfield, New Jersey and a member of the Chesterfield Meeting. She inscribed the chest in graphite on the underside of a cedar drawer bottom: “Sarah Thorn her Draws / made by Wm. Beakes this 14th / mo 1720.” This chest is in the collection of the Dietrich American Foundation and illustrated in H. Richard Dietrich and Deborah M. Rebuck, eds. In Pursuit of History: A Lifetime Collecting Colonial American Art and Artifacts (New Haven and London: Yale University Press, 2019): cat. 2.7, pp. 114-5.4 One other chest of drawers signed “William / Beake” in red crayon is in a private collection.5

The present chest and the two others signed Beakes display the following construction characteristics: use of black walnut as the primary wood; a two short drawer over three long drawer configuration; a joined case; drawers joined with half blind dovetails; drawers with pine sides and backs and cedar bottoms; drawer bottom boards set into a rabbet of the drawer front and nailed to the bottoms of the sides and back; use of wedges in pins of the short drawers; small overcuts where the dovetails of the drawer sides are cut; flat tops of the drawer sides and backs; use of pine for the rear upper and lower rails of the case; and rear case stiles that extend to the floor without adding a turned foot.6 Saw kerfs are visible on the interior surfaces of the drawer fronts of this chest and the one in the collection of the Dietrich American Foundation. Beakes numbered the drawers of all three of his chests as guides in the drawer assembly. Each drawer contains matching numbers on the interior faces of the side, rear, and front boards written in chalk on this chest and graphite and red crayon on the others. The lower case rail of this chest is inscribed “Botom” in red crayon. See also Christopher Storb, “William Beakes, Joyner, Part II,” In Proportion to the Trouble (April 2, 2021) for a detailed description of the construction of these three chests.

One other early signed and dated example of Philadelphia furniture is a desk-and-bookcase at Colonial Williamsburg that was made by Edward Evans (1679-1754) in 1707. It is illustrated in Cathryn J. McElroy, “Furniture in Philadelphia: The First Fifty Years,” Winterthur Portfolio 13, edited by Ian Quimby, 1979, fig. 16, p. 76.