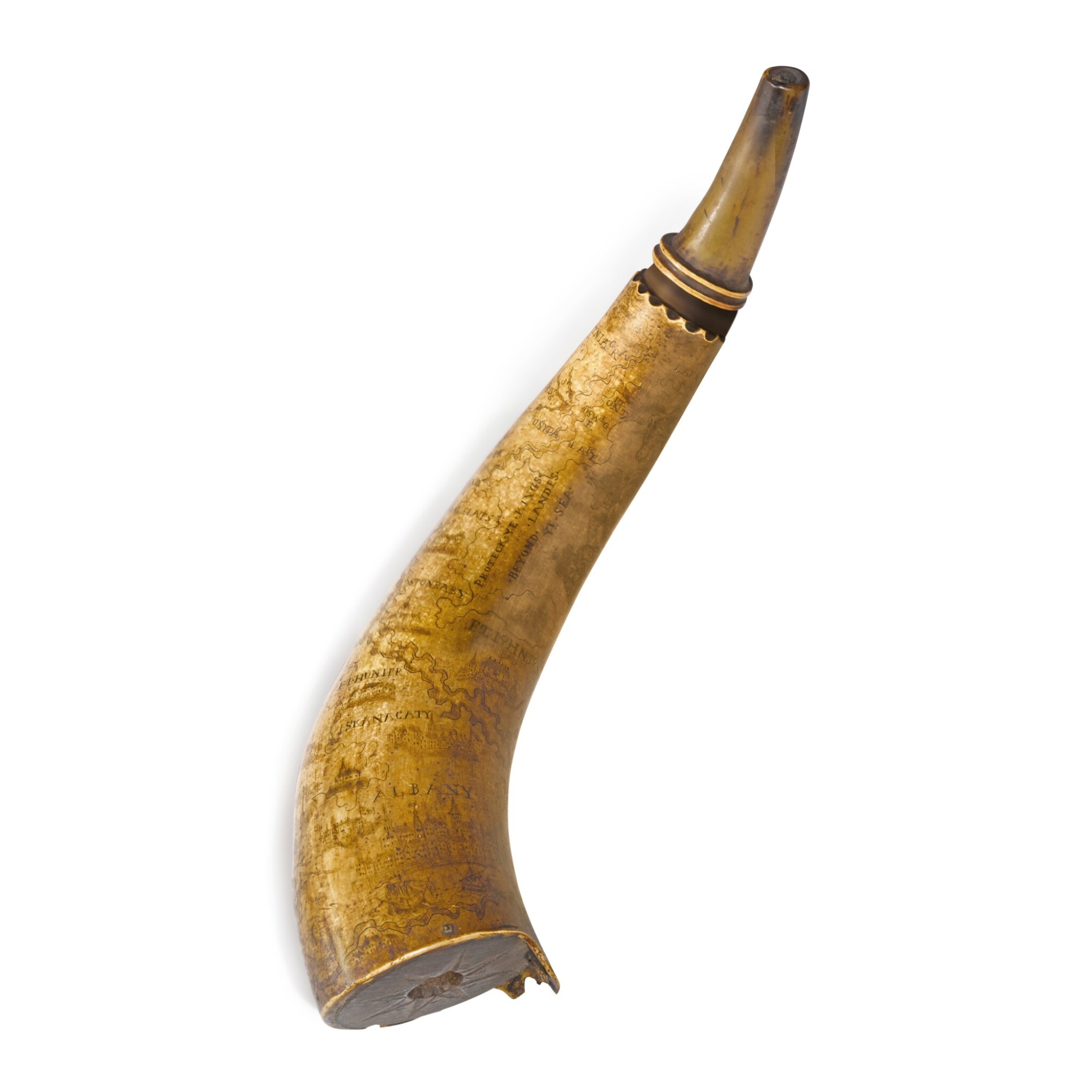 At the time this intricately engraved map powder horn was made, its owner, Nathaniel Woodhull (1722-1776) of Brookhaven, Long Island, was newly promoted to the rank of Colonel of the Third Regiment of New York Provincials, with the horn probably purchased to celebrate his achievement. Born into a prominent Long Island family, Woodhull could have continued the family tradition of being a gentleman farmer but instead admirably committed himself to military involvement at an important time in American history. Woodhull joined the provincial forces of New York as a major under General James Abercromby in the Battle of Carillon in July 1758 and under General Bradstreet in the Battle of Fort Frontenac in August of the same year. Many sources cite 1760 as the date when Woodhull became Colonel, but this horn engraved 1759, proves otherwise; and it is important to acknowledge that this was a pivotal year for British forces in the French and Indian War. Given Woodhull’s involvement and survival in the bloody Battle of Carillon, it would not be surprising if he was involved in the 1759 Battle of Ticonderoga, in which the British successfully re-occupied and renamed fort Carillon to Ticonderoga and began constructing military operations on Lake Champlain. There is also the possibility that Woodhull was involved in the Battle of Fort Niagara, the Battle of the Thousand Islands, and the Battle of Quebec, all of which occurred in the summer and fall of 1759 and revolved around the British military campaign to capture French Canada. In 1760, under the command of General Amherst of the Third Regiment of New York Provincials, it is known that Colonel Woodhull victoriously marched against Montreal and effected the final reduction of Canada.

Woodhull returned to his home in Long Island in 1761, marrying Ruth Floyd and tending to his land. Remaining active in Patriot politics and outspoken in his position against England’s taxation of the colonies, he was elected to Province of New York assembly for Suffolk County in 1769 and served until 1775. In 1774, he represented Suffolk County as one of the delegates in the First Continental Congress. In 1775, Woodhull was elected president of the New York Provincial Congress in 1775 was appointed Brigadier General of the militia in Sufolk and Queens Counties. In August 1776, on the cusp of the Battle of Long Island, Woodhull’s militia was detailed to drive livestock east out of British reach; however, a severe thunderstorm forced him to take refuge in a tavern and he was soon captured by Light Dragoons near Jamaica. He was slashed with a sword multiple times, purportedly for rebellious speech against the Crown. His arm became gangrenous and was amputated in order to save his life, but the infection had spread to his body. He died a month later at the age of 54, his wife at his bedside, in Brooklyn, New York, and his body was transported and buried at his family burial ground in Mastic, New York. For additional information on General Woodhull, see Michael Hayes, “General Nathaniel Woodhull and the Battle of Long Island,” The Long Island Historical Journal, Spring 1995, vol. 7, no. 2, pp. 166-177.