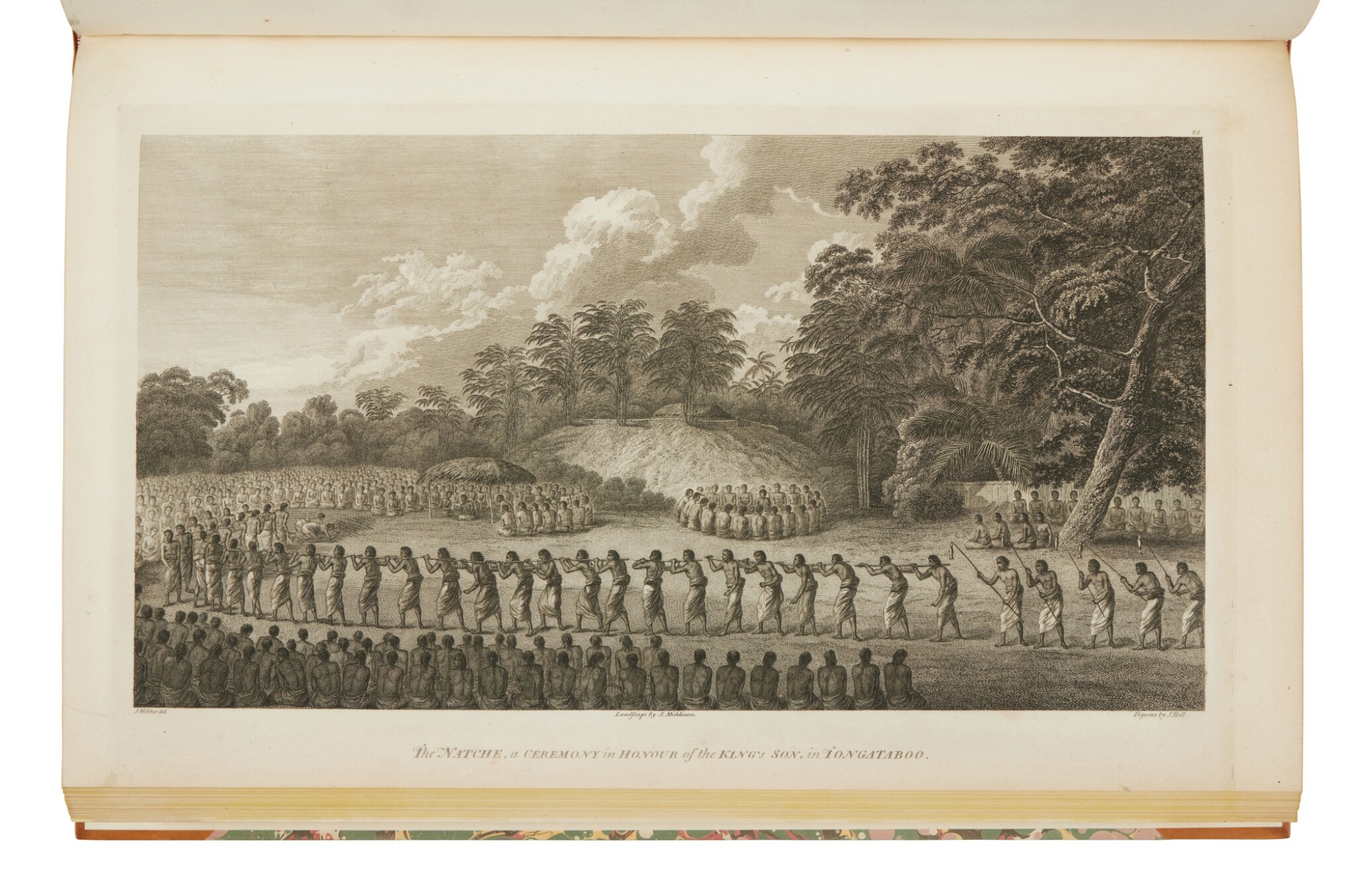 A complete set of Captain Cook's voyages, cumulatively the most important printed record of Pacific exploration

[FIRST VOYAGE] — Hawkesworth, John. An Account of the Voyages undertaken by the Order of his Present Majesty for making Discoveries in the Southern Hemisphere, And successively performed by Commodore Byron, Captain Wallis, Captain Carteret, and Captain Cook ... London: W. Strahan and T. Cadell, 1773. 3 volumes, 4to (275 x 225 mm). 51 engraved plates, many of which folding, others double- and single-page; first volume with front free-endpaper, frontispiece map, and title-page cleanly detached, second volume with short closed tear to inner margin of first plate, plate no. 5 with punctures at outer blank margin, closed tear along guard of the "Chart of New Zealand," and mild worming at inner margin, third volume with short closed tear to title-page at inner margin, foxing to the "New South Wales" plate, and closed tear at inner margin of "Chart of Part of the Coast of New South Wales," overall with scattered foxing, a few stray stains, light offsetting and browning. An early issue, without the "Straight of Magellan" plate and the "Directions for Placing the Cuts and Charts," and with one erratum on the description of the plates leaf.

[SECOND VOYAGE] — Cook, James, Captain. A Voyage Towards the South Pole, and Round the World. Performed in His Majesty's Ships Resolution and Adventure, In the Years 1772, 1774, and 1775. London: W. Strahan and T. Cadell, 1777. Two 4to volumes (275 x 225 mm) and one folio atlas (490 x 332 mm). Text volumes with frontispiece portrait, title-pages, and a folding table; offsetting from frontispiece, scattered foxing, one or two stray stains. 63 engraved plates in the atlas, some of which folding; repaired tears to "Monuments in Easter Island" and "The Landing at Tanna one of the New Hebrides" plates.

[THIRD VOYAGE] — Cook, James, Captain and James King. A Voyage to the Pacific Ocean. Undertaken, by the command of His Majesty, for making Discoveries in the Northern Hemisphere. London: W. and A. Strahan for G. Nicol, 1784. Three 4to volumes (275 x 225 mm) and one folio atlas (540 x 343 mm). Text volumes with title-pages, 24 engraved plates, many of which folding, folding table; front free-endpapers of first and second volumes nearly detached, second volume with marginal stain affecting Nn2-Nn3 and a short closed tear to lower margin of P4, third volume with chip to outer margin of Uu1, mild offsetting and scattered foxing throughout. 63 engraved plates in the atlas, one of which folding; closed tear where folds meet on the "General Chart" plate, repaired tear in the lower blank margins of "Canoes of Oonalashka" and "A Woman of Oonalashka" plates, small internal tear affecting the "Caps of the Natives of Oonalashka" plate, tiny marginal closed tear to the lower blank margin of "The Inside of a House in Nootka Sound" plate.

The Frank S. Streeter first edition set of Captain Cook's voyages, with atlases to the second and third voyages.

Cook's first voyage included visits to Tahiti and New Zealand, and the tracing of the east coast of Australia was one of the most perilous feats of navigation in the whole recorded history of exploration. The second voyage pushed further south in search of a southern continent than any previous navigators, and in doing so visited numerous Pacific islands. The third voyage returned to islands previously visited, discovered Hawaii, and explored the northwest coast of America from Alaska to Oregon. The text of these official reports form an invaluable record of the voyages, but they are enhanced enormously by the plates, maps, charts and views which include the work of one of the greatest cartographers of his day, as well as images from the three most important artists to visit the Pacific during the eighteenth century.

A magnificent set of the official accounts of the voyages undertaken by the most celebrated navigator in Pacific history.