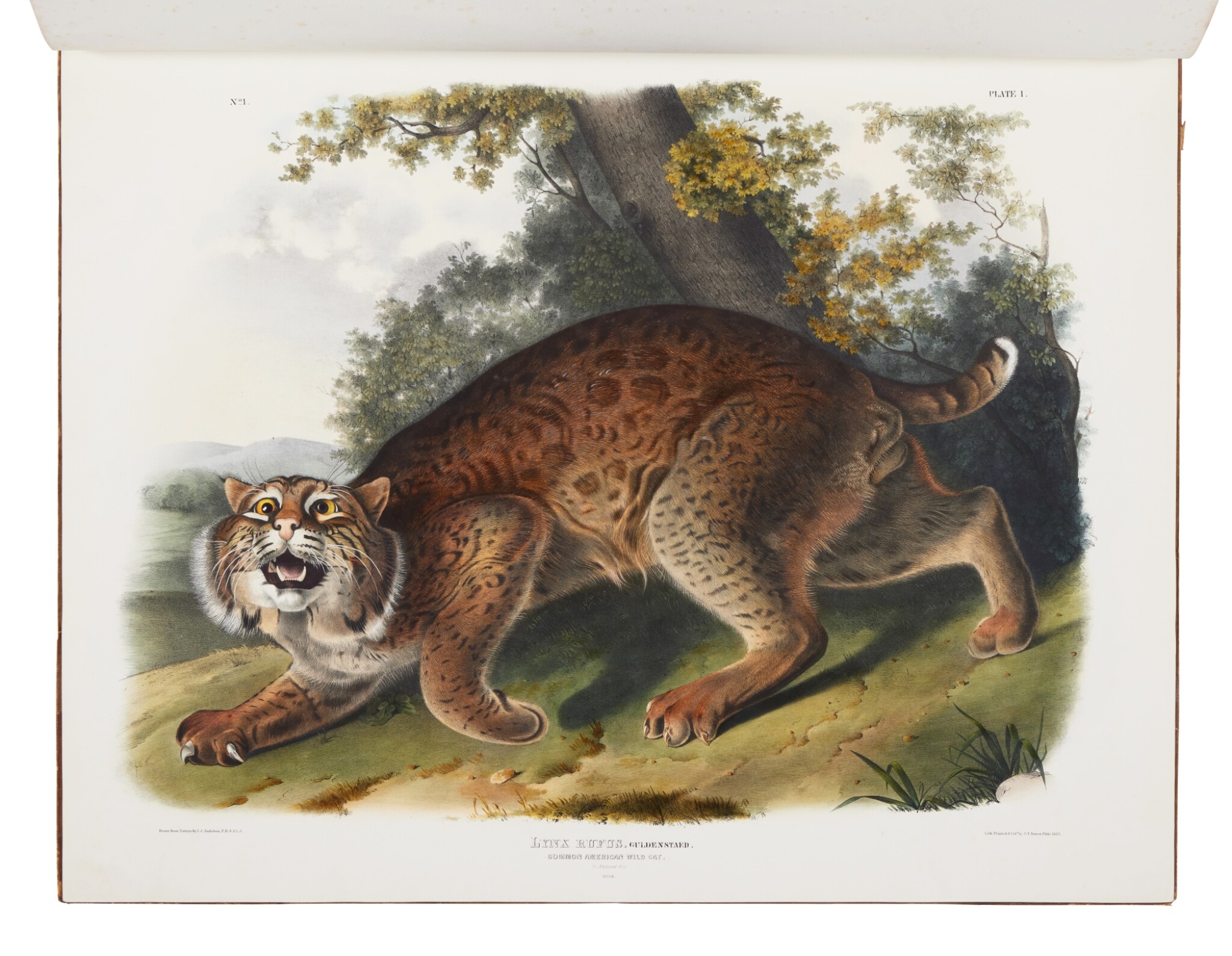 "I am growing old, but what of this?" wrote Audubon to his collaborator the Rev. James Bachman. "My spirits are as enthusiastical as ever, my legs full able to carry my body for ten years to come, and in about two of these I expect the illustrations out, and ere the following twelve months have elapsed, their histories studied, their descriptions carefully prepared and the book printed! Only think of the quadrupeds of America being presented to the World of Science by Audubon and Bachman" (Streshinsky, Audubon, p. 332).

By the mid-1840s, John James Audubon was the most famous naturalist painter in America. The Birds of America, his masterpiece, had been completed, earning him a tidy sum. With his fortune, Audubon built a house on the Hudson River, in what is now the Upper West Side of New York City. But even before the completion of his Birds, he had begun to consider documenting mammals in the same fashion. Indeed, Audubon wrote to a friend in 1839, several years before the completion of the double-elephant folio edition of The Birds of America, "I know a good deal about our Quadrupeds and have many valuable notes about them in my various journals of the woods and swamps."

The Quadrupeds was to be Audubon’s grand final project—one he hoped would replicate the success and scientific contribution of the Birds. While he originally conceived of it as a single-volume work of around one hundred illustrations—"the whole work to be finished (God granting me life and health) in two years!"—the three-volume work would eventually take fifteen years to complete. From the beginning, he was aware that his understanding of North American mammals was not equal to his easy familiarity with the continent’s ornithological life. Still, Audubon approached this project with characteristic zeal, and turned to his friend, and the father-in-law of his sons John and Victor, Rev. John Bachman of Charleston, for the knowledge he lacked. Bachman, an amateur naturalist, would supply the scientific expertise necessary to produce the text volumes, based on Audubon's report from an expedition into the West, which would complement the plate volumes. It would be his last major expedition, undertaken "solely for the sake of our work on the Quadrupeds of North America." The journey up the Missouri River from St. Louis in the steamboat Omega began in the spring of 1843 and returned him to that city in November of that year.

After the expedition, the artist's health began to deteriorate. He managed to complete roughly half of the drawings before his failing health kept him from the work, and the remainder were completed by his son, John Woodhouse Audubon. Unlike the Birds, the Quadrupeds was truly a collaborative work. Audubon was, however, the project's éminence grise throughout the process. As Ron Tyler has written, "The master provided the genius and guiding hand. Audubon was the person who conceived the projects and had the enthusiasm and determination to see them through. He was the artist, the author, the designer, and, when the time came, the salesman. As the success of the 'little work' grew, Audubon’s dominant role in the process became more apparent." Throughout his artistic life, Audubon had occasionally sketched and painted mammals. None of his early efforts, however, compare with the seventy-seven watercolor drawings he completed for the Quadrupeds. Many of these illustrations can hold their own in subtlety and penetrating observation with the most celebrated of the Bird drawings.

It has often been remarked that the plates completed by his son John lack the masterful touch of the father’s art. An even-handed evaluation of the quality of the Quadrupeds is provided by Annette Blaugrund in her study of Audubon’s artistic development: "The plates that are based on Audubon’s drawings have graceful composition and lively representations. Those plates that are not by the elder Audubon have representations that are stiffer, less lifelike, and less original in composition. The task of completion fell to John Woodhouse Audubon, who as an artist was not as talented as his father. Yet the younger artist did produce handsome work, such as Red Texan Wolf, approaching the quality of his father’s work. Nevertheless, The Viviparous Quadrupeds of North America was a collaborative project. The final product resulted from the combined work of Audubon, his sons, and his printmakers. In the end, the beauty of the work is greater than the sum of its parts."

Unlike the Birds of America, the Quadrupeds was a product of the great age of lithography. The new, more economical process had quickly replaced copperplate engraving for massive undertakings of this kind. For this task, Audubon selected the Philadelphia printer J. T. Bowen. The handcoloring of the plates was also under Bowen’s supervision. A reviewer in the Boston Atlas wrote: "The plates are colored to the life, and are so thoroughly life itself, that few people would venture to put their fingers near the mouth of one of the squirrels, for fear of an actual bite." The book was to become a milestone in American printing history—no project of this size had ever been undertaken successfully in the United States. It was Bowen’s work on the plates for Thomas McKenney and James Hall’s History of the Indian Tribes of North America (see lot 33) that first alerted Audubon to the printer’s impressive skills.

The marketing and distribution of the Quadrupeds would follow the system used for the Birds: fascicles of five plates would be issued bi-monthly to subscribers. This dauntingly massive enterprise was eventually a commercial success owing chiefly to Victor Audubon’s careful management. Before Audubon’s death in 1851, his sons succeeded in soliciting some three hundred subscriptions for the work.

Critical appreciation of the work was almost immediate, as was pride in the fact that the work was produced entirely in the United States and without foreign patronage. In 1847, the American Review enthused, "We have at last a Great National Work, originated and completed among us—the authors, artists, and artisans of which are our own citizens … We have no truer mission here than that of commentators upon the illustrators of God’s first revelation to us—'the Bible of Nature!' and it would be very difficult to find a Family whose deeds and history more entirely illustrate their recognition of such an Apostleship. They may be called the Levites of a new order of priesthood in the Temple of Nature!" This sentiment was echoed by Charles W. Webber in the Southern Quarterly Review (October 1847): "Audubon saw that art was universal, and that the earth was God’s earth and not man’s. His genius perceived something purer and more ennobling in the mission of art, than the sole perpetuation of the bloody and perverted passions of humanity. He felt that nothing that God has made is common or unclean to the true artist. HIS truth is every where symmetrical, and though we may turn in disgust from distorted exhibitions of the distorted man, yet are our senses freshened—still is our faith cheered by those chaste revelations of a primeval and most beneficent purpose, which Audubon has bravely snatched from out the ‘waste places’ of God’s earth!"