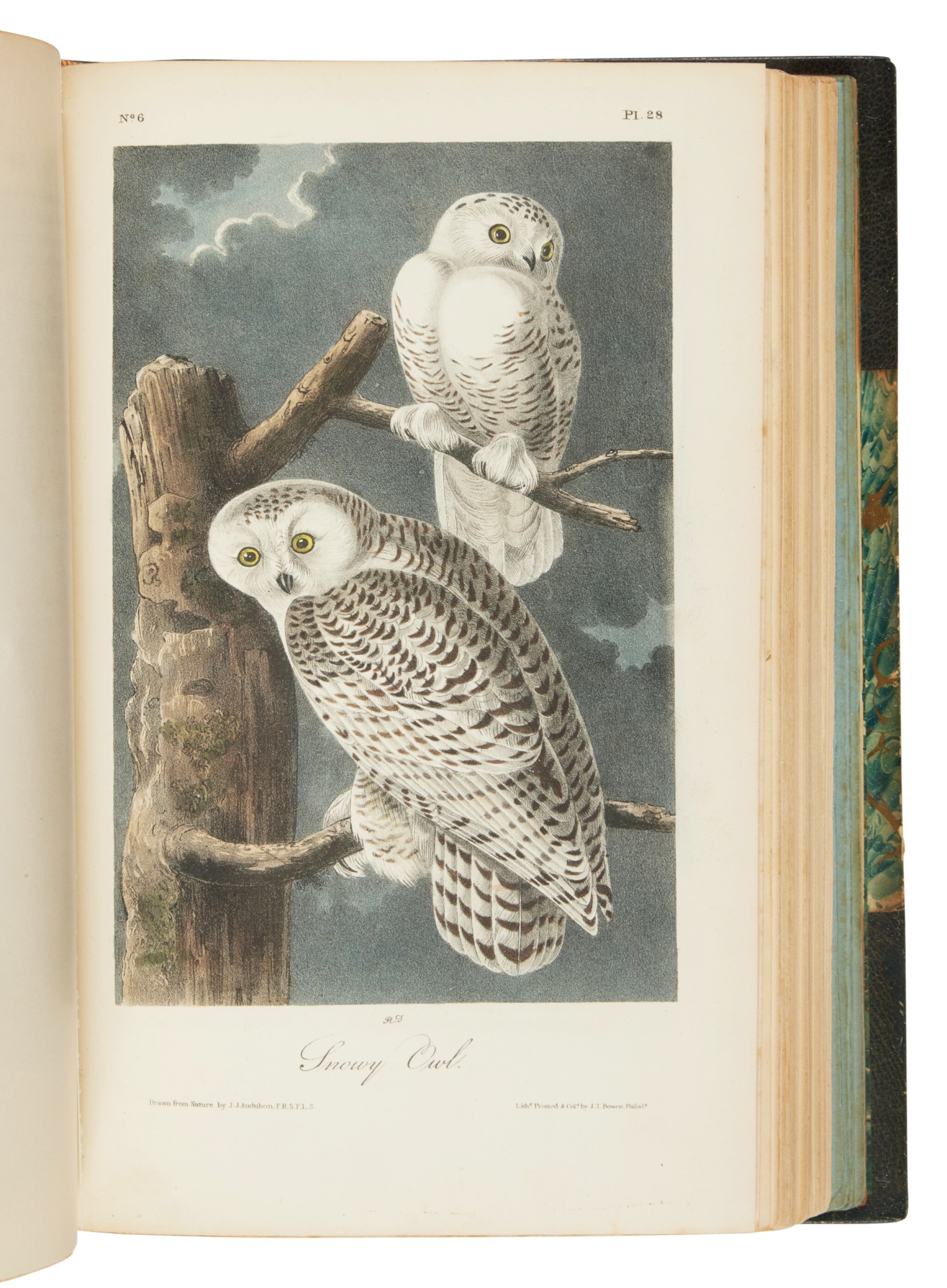 After completing the double-elephant folio edition at great expense in England, Audubon returned to the United States and used the Philadelphia firm of Bowen to produce a more profitable octavo version under the supervision of his sons. J.T. Bowen reduced the double-elephant plates by camera lucida and the resulting lithographs show significant changes in the backgrounds and compositions. The text is a revision of the Ornithological Biography, rearranged according to Audubon's "A Synopsis of the Birds of North America" (1839). The octavo edition adds 65 new images to the original plate count of the double-elephant folio.

The rear wrappers of the original parts provide a prospectus for the octavo edition, including the "particulars of the plan":

1. The size of the work is royal octavo, the paper being of the finest quality.

2. The Plates representing the Birds are correctly reduced from the original drawings, and are coloured in the most careful manner.

3. The work will appear in numbers, on the first and fifteenth of every month.

4. Each number will consist of Five Plates, accompanied with full descriptions of the habits and localities of the birds, their anatomy and digestive organs, (with occasionally wood cuts representing the latter,) and will be furnished to subscribers for one dollar, payable on delivery.

5. The work will be published in accordance with a scientific arrangement of the genera and species, and will complete the Ornithology of our country, it is believed, in the most perfect manner.

The work enjoyed a tremendous success and established his reputation. The octavo edition proved to be more profitable for Audubon, as it was successfully marketed throughout the United States on a scale that the great cost of the original Birds made impossible. Further, it was another step toward proving himself as a scientific naturalist as much as an artist, combining a detailed text with careful observations alongside his plates.

The present copy has a significant American military provenance. Andrew A. Humphreys, whose autograph signature appears on a number of the original wrappers, was the born to a notable military family. His grandfather, Joshua, was the "Father of the American Navy," and designed the first American warships; his father, Samuel, designed and built the USS Pennsylvania. Andrew himself served in the Seminole War before resigning in 1836 to become a civil engineer. He was reappointed to the Army two years later as 1st. Lieutenant in the corps of Topographical Engineers.

In 1850 Humphreys and Lt. Henry L. Abbot were directed to undertake a thorough scientific survey of the Mississippi River, which ultimately took ten years to complete. The two authored the Report on the Physics and Hydraulics of the Mississippi River (1861), which was a major scientific and engineering contribution. Humphreys further served as Chief Topographical Engineer of the Army of the Potomac during the Civil War.