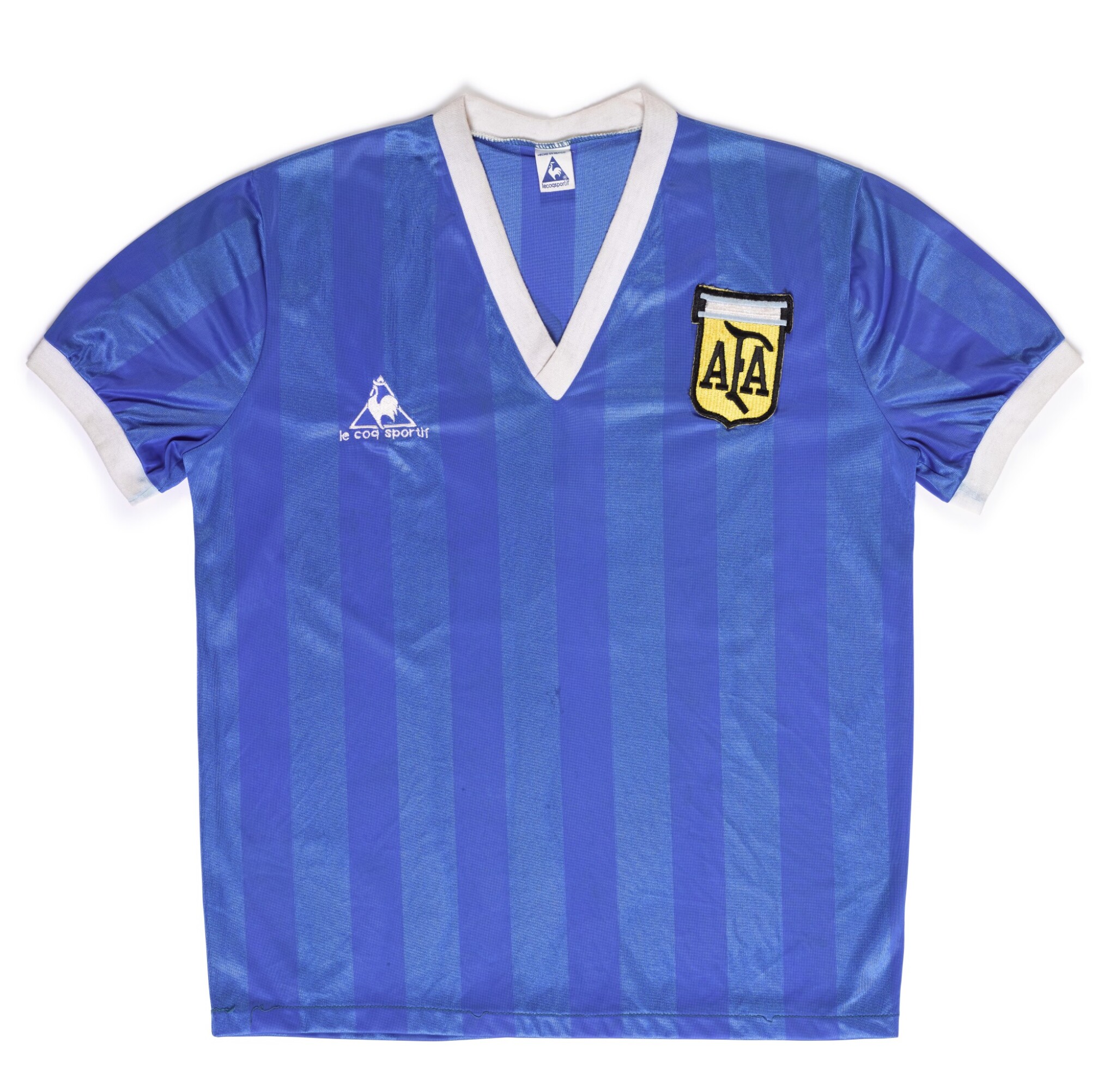 The shirt is in good overall condition consistent with heavy use, perspiration and athletic activity. Slight de-threading on hemming on the front bottom of shirt, and minor spots throughout. For a more detailed condition report, please email brahm.wachter@sothebys.com.

In order to bid, clients will need to register with Sotheby’s first in advance of the close of the auction. Please reach out to brahm.wachter@sothebys.com to register.

The Collection of Footballer Stephen Hodge, gifted from Diego Maradona

Few moments in sports can truly toggle the line between athletics and something bigger. For Americans, people’s minds might go to the famous Miracle on Ice, when the United States defeated the Soviet Union in the 1980 Olympic Games during the height of the Cold War. These moments though are few and far between in the sporting world, when a game can go beyond the bounds of the physical contest. For England and Argentina, after a bitter conflict in the Falkland Islands War just years earlier, that moment was encompassed during the 1986 World Cup Quarterfinals, when the two squared off in a high stakes match drenched in historical importance.

On the 22nd of June 1986, a 25 year old Diego Maradona “The Golden Boy” – who many consider the greatest to ever play the game of football – would make history in the match and cement his name permanently in the chronicle of the sport and on the world’s largest stage at that. Two of the most extraordinary goals (and perhaps one of the luckiest) in the sport of football were scored in the same match, and no less, by the same player.

The first, known around the world as “The Hand of God” occurred when Maradona – in the second half of the Quarterfinal – scored a cunning goal with his hand. It all happened quickly, and in the blink of an eye Maradona had fooled the officials, masking his mischief with a convincing celebration. As the referees did not have a clear view of the play, the goal stood, giving Argentina a 1-0 lead in the contest. In his own words Maradona would say he told his teammates, “I told them, ’Come hug me, or the referee isn’t going to allow it.’” After the game Maradona was quoted saying he made the goal with, “a little with the head of Maradona, and a little with the hand of God.” He would later explicitly state that he felt it was “symbolic revenge” for the United Kingdom’s victory in the Falklands Island War. The play is globally renowned as one of the most iconic moments in the history of the sport of football.

The second goal known as the “Goal of the Century” – which many consider to be the greatest individual goal of all time – occurred when Maradona dribbled past a host of England players, dancing around them in angelic style, carrying the ball half the length of the pitch and scoring a tremendous second goal against English goalkeeper Peter Shilton.

In 2002 FIFA held a vote as part of a promotion for the 2002 World Cup. Over a 6 week span, more than 340,000 votes were cast from over 150 countries, with Maradona’s second goal in the match receiving the title of “Goal of the Century.” The goal would cement Argentina’s 2-1 victory in the contest against the English. Argentina would go on to win the 1986 FIFA World Cup.

After the game, England midfielder Steve Hodge (the consigner for this offering), who had flicked the ball unintentionally to Maradona on “The Hand of God” play decided he would ask Maradona to swap shirts. In an interview with FIFA, Hodge recalled, “I thought, I won’t be here again. I’ll try and get a shirt… I shook Maradona’s hand. He was being mobbed by his team-mates. So I thought, ’There’s no point, just leave it.’” Hodge then did a TV interview, and then had a second chance encounter with Maradona. “After the interview, I went down, behind the goal, to the changing rooms… As I went down, Maradona was walking with two of his team-mates. I looked him in the eye, tugged on my shirt as if to say ’any chance of swapping?’, and he came straight across, motioned a prayer, and we exchanged shirts. And that was it. It was just as simple as that.” Maradona lays out the exchange as well in his book, Touched by God, “On the way to the locker room, one of the English guys—it turned out to be Hodge, but I wasn’t sure at the time—asked me to swap jerseys with him. I said yes and we did.” The shirt has been on loan to the National Football Museum in Manchester since 2002.

The shirt itself also has an interesting history. After beating Uruguay in the Round of 16 coach Carlos Bilardo was concerned that cotton jerseys might be too heavy in the scorching heat of Mexico City. As such, coach Bilardo sent a member of his staff – Ruben Moschella – to search for a last minute option that would suit the hot conditions more adequately. Apparently, they were unable to choose between two options. Maradona would later appear and look at this very style of jersey and say, “That one. We’ll beat England in that one.” Moschella bought enough of them to outfit the team, and two seamstresses at the training camp sewed on makeshift Argentinian Football Association patches. The numbers were then ironed to the back of the shirts. Maradona would joke in his book, Touched by God that, “the numbers were a joke. When we went out onto the field, some of the guys had sparkles on their face because the numbers were silver and sparkly… And after genius kit man Tito Benros had ironed those numbers onto thirty-eight jerseys, he looked like he should have been at a carnival, not at Azteca Stadium! If it happened to rain, like it had in our match against Uruguay, it was going to be a real disaster: we wouldn’t know who was who or what position the others were playing.”

A key part of understanding the item is understanding the historical context of the rivalry between Argentina and England. The Falkland Islands War began on April 2nd of 1982 – approximately 4 years prior to the historic World Cup match – when Argentina invaded and occupied the Falkland Islands which the Argentinian’s asserted as their own territory. As the islands had been under British leadership since the 1840s, the British of course disagreed. On April 5, the British Government dispatched the Navy to engage with the Argentinian armed forces. The conflict lasted over 2 months and would culminate with British victory. The War came at a grave cost, over 600 Argentinian military personal lost their lives as did over 250 British personnel. The history and rivalry between the two countries imbued this football match with deep historical, personal, and patriotic context for both nations. In his autobiography Maradona would state:

“It was like beating a country, not a football team. Although we said before the game that football had nothing to do with the Malvinas War, we knew that a lot of Argentine kids had died there, that they had mowed us down like little birds… This was our revenge, it was... recovering a part of the Malvinas. We all said beforehand that we shouldn’t mix the two things but that was a lie. A lie! We didn’t think of anything except that, like hell it was going to be just another game!"