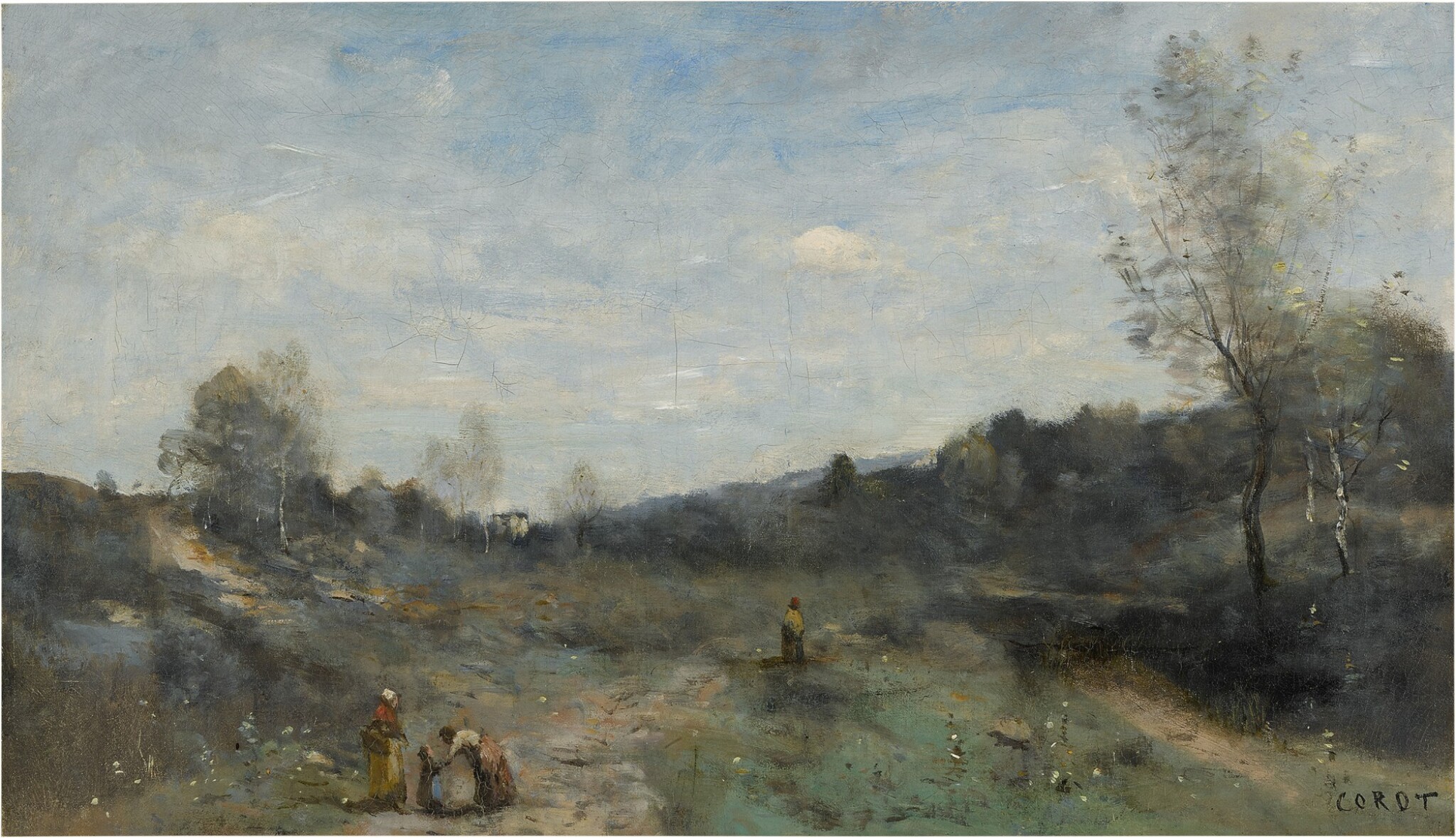 The following condition report was kindly provided by Simon Parkes Art Conservation, Inc.: This work is in beautiful condition. The canvas is unlined. The tacking edges have been reinforced. The paint layer is stable and even. The work is clean and lightly varnished. Under ultraviolet light, one can see a few very small retouches in some cracking in the sky, but these are not numerous. The work is in excellent state.

Painted circa 1865-70, Vallons défrichés is representative of Jean-Baptiste-Camille Corot’s artistic ingenuity and painterly freedom at the height of his prolific career. Crisp hues of blue and green are balanced by his characteristic planes of ambiguous color which describe the sun-struck landscape. A tall willowy birch, with its glittering silver foliage, stands at right, and the ground is punctuated with confetti-like flowers. Summarily painted figures animate the scene and emphasize Corot’s enduring connection to the pastoral landscape.

In the last fifteen years of his life, Corot experienced a renewal of critical appreciation for his work. Collectors and dealers eagerly sought out his canvases, and throughout the 1860s and 1870s he was readily included in the Paris Salon, either because he was on the jury himself, or automatically admitted hors concours (a departure from his difficulties in the 1840s and 1850s). In 1877 the French Art critic Charles Blanc remembered that Corot “was loved like a comrade and respected like a master” (as quoted in Gary Tinterow, Michael Pantazzi, Vincent Pomarède, Corot, exh. cat., The Metropolitan Museum of Art, New York, 1996, p. 259). Seeking his instruction and approval was a younger generation of painters including Berthe Morisot and Camille Pissarro, identified as a pupil of Corot in Salon brochures as a sign of respect, while Claude Monet, Pierre-Auguste Renoir and Alfred Sisley each experimented with the artist’s techniques in the 1860s. In 1897, Monet wrote “There is only one master here—Corot. We are nothing compared to him, nothing” (as quoted in Tinterow, p. xiv).