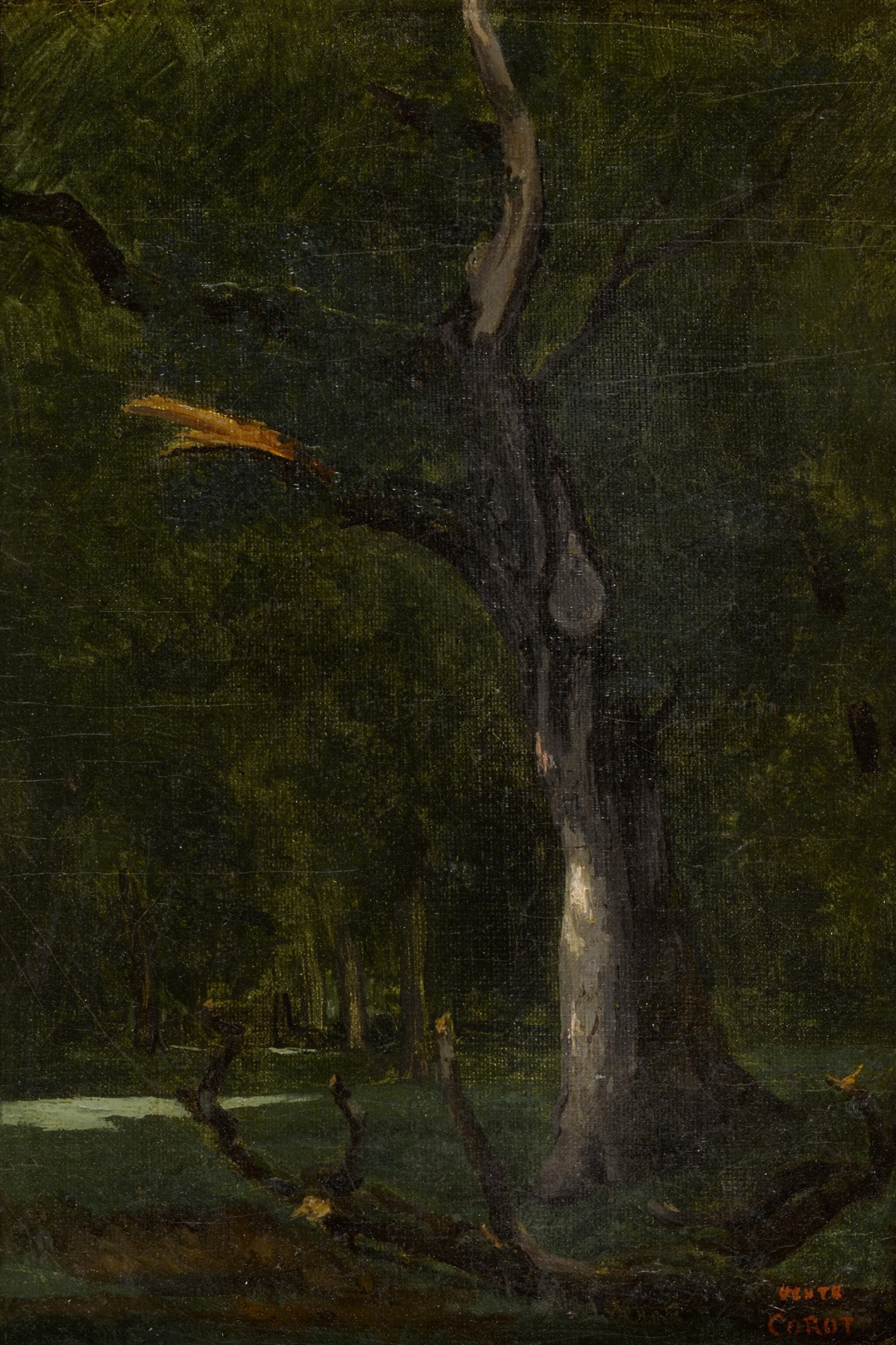 Canvas has a very old lining. The paint surface is in good condition and without craquelure. Under UV light: very small dots of retouching through the composition. Framed under glass.

Painted circa 1823-24.The present sketch is one of Corot's earliest recorded Plein-air studies. It was executed in the forest of Fontainebleau before the artist's fist seminal trip to Italy in 1825, and remained in his studio until his death. Alfred Robaut, in his catalogue raisonné of Corot's work published in 1905, lists forty such early studies from nature by the artist, dating to circa 1822-25 (R 1-40). At this time, Corot worked in Normandy, painting in Dieppe, Honfleur and Rouen. The principal focus of his attention during these years, however, was the forest of Fontainebleau, probably on the advice of his teacher, the landscape painter Achille-Etna Michallon.

Corot was one of the first artists to work there regularly and Roubaut records ten such painted studies from nature comparable to the present one - studies of fallen tree trunks and rocks in the forest viewed close-up rather than in a panoramic format. This work is comparable to an oil study nearly identical in dimensions, though horizontal, of a fallen tree trunk lying next to the Pavé de Chailly in Fontainbleau, no. 8 in Robaut's publication.

Following the instructions of Michallon and Jean-Victor Bertin (1767-1842), Corot's teacher after Michallon's death in 1822, the artist's aim in these early studies was to observe and record nature as directly and truthfully as possible. The importance of drawing and painting directly from nature was laid out very clearly by Bertin's teacher, Pierre-Henri de Valenciennes (1750-1819), in his influential treatise on landscape painting, Eléments de perspective pratique, published in 1800. The importance of working directly from nature was not lost on Corot and he writes of its significance in an early notebook from this time: 'I have noticed that all the work done on the first attempt is more honest, more pleasing in form, and that it was obvious then how to take advantage of contingencies; whereas in going back to it, that harmonious original touch often gets lost ...' (G. Tinterow, M. Pantazzi, V. Pomarède, Corot, Exhibition catalogue, Paris, Galeries Nationales du Grand Palais, Ottawa, National Gallery of Canada, and New York, The Metropolitan Museum of Art, 1996-97, p. 16).