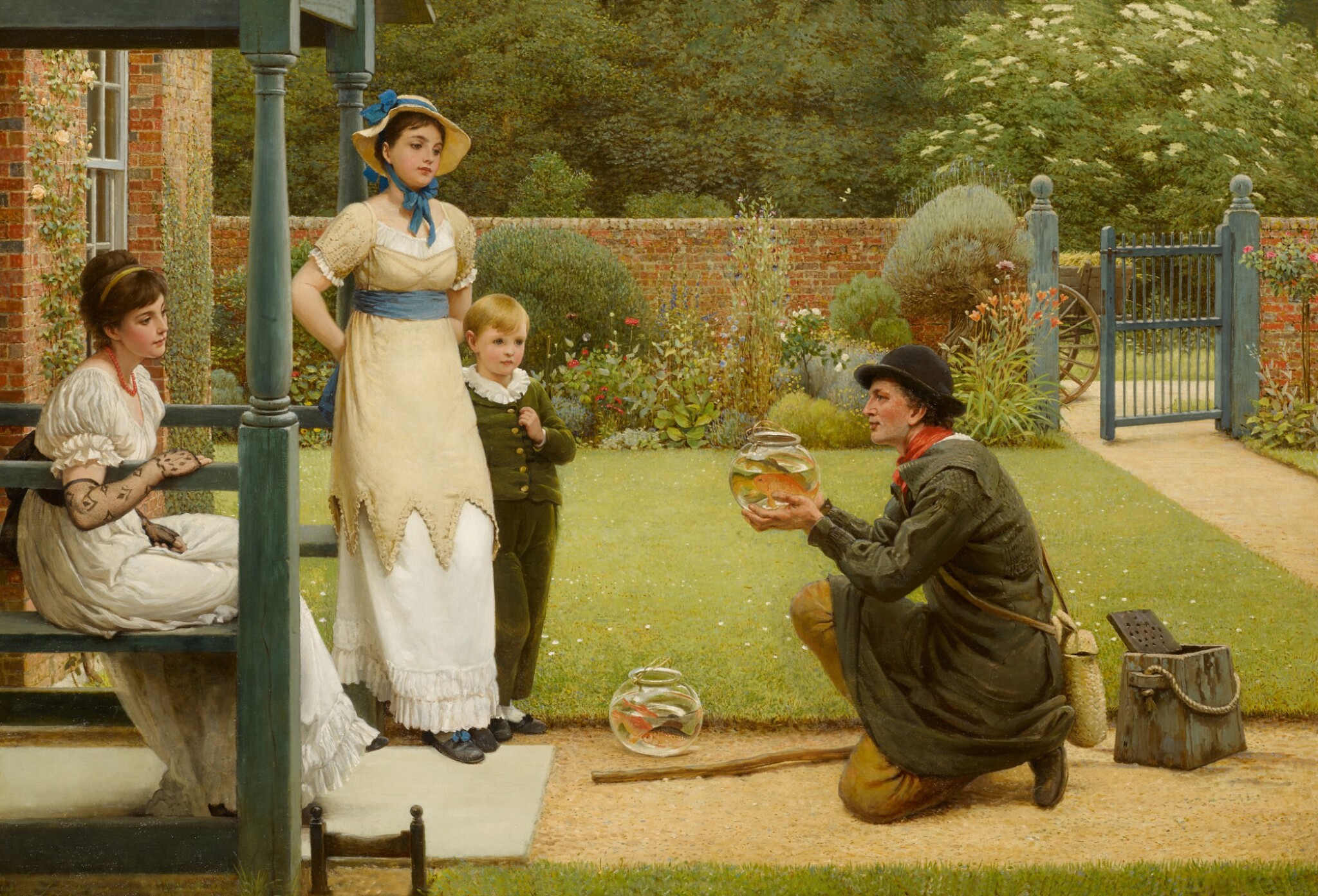 oil on canvas mounted to panel

To request a condition report for this lot, please contact Alex.Kaplan@sothebys.com.

In The Goldfish Seller, George Dunlop Leslie captures the Victorian fascination with the interaction of different social classes. Unlike many of his contemporaries, who explored this new phenomenon through ambitious scenes of crowded train stations or busy city streets, Leslie chooses instead a more intimate moment, as a traveling peddler offers a goldfish for sale to a family in the suburbs of London. The potential buyer looks bemusedly at the peddler while a young woman leans absent-mindedly against the porch railing, the young boy pressed closely to her side. In true Victorian fashion, the peddler, and by extension the working class, "has been sanitized, ordered and made acceptable to the middle-class audience" (Christopher Wood, Victorian Painting, 1999, London, p. 65). The frieze-like arrangement of figures and distinctive linearity (created by a series of intersecting vertical and horizontal lines) impart a strong internal order to the composition, and the significant spatial gap between the peddler and his audience further reinforces the existing social gap.

With the opening of the first ever public aquarium at the Zoological Gardens at Regents Park in 1853 in London, keeping fish as pets became a popular hobby in Victorian England as both an affordable and educational pastime for the newly emerging middle-class. In his book on the British fascination with aquaria entitled The Family Aquarium, Henry D. Butler explains: "The aquarium was on everybody's lips. The aquarium rang out in everybody's ears. Morning, noon and night it was nothing but the aquarium" (as quoted in Bernd Brunner, The Ocean at Home: An Illustrated History of the Aquarium, Princeton, 2005, p. 55). In 1854, the German malacologist (a scientist who studies the zoological group of soft-bodied animals) Emil Adolf Rossmässler published the article Der Ocean auf dem Tische (The Ocean on the Table) in his popular magazine Die Gartenlaube, in which the author deals "with this strange British apparatus known as the aquarium" (Brunner, p. 60). By 1860, aquaria mania had died out in England, but as late as 1917, fish bowls were popular elements in home décor in American households; in The Art of Interior Decoration (New York, 1917), authors Grace Wood and Emily Burbank devote a chapter to the decorative "Treatment of Work Tables, Bird Cages, Dog Baskets and Fish Globes." They write "[t]he fish-globe can be of white or any colour glass you prefer, and your fish vivid or pale in tone; whichever it is, be sure that they furnish a needed — not a superfluous — tone of colour in a room or on a porch" (p. 106).