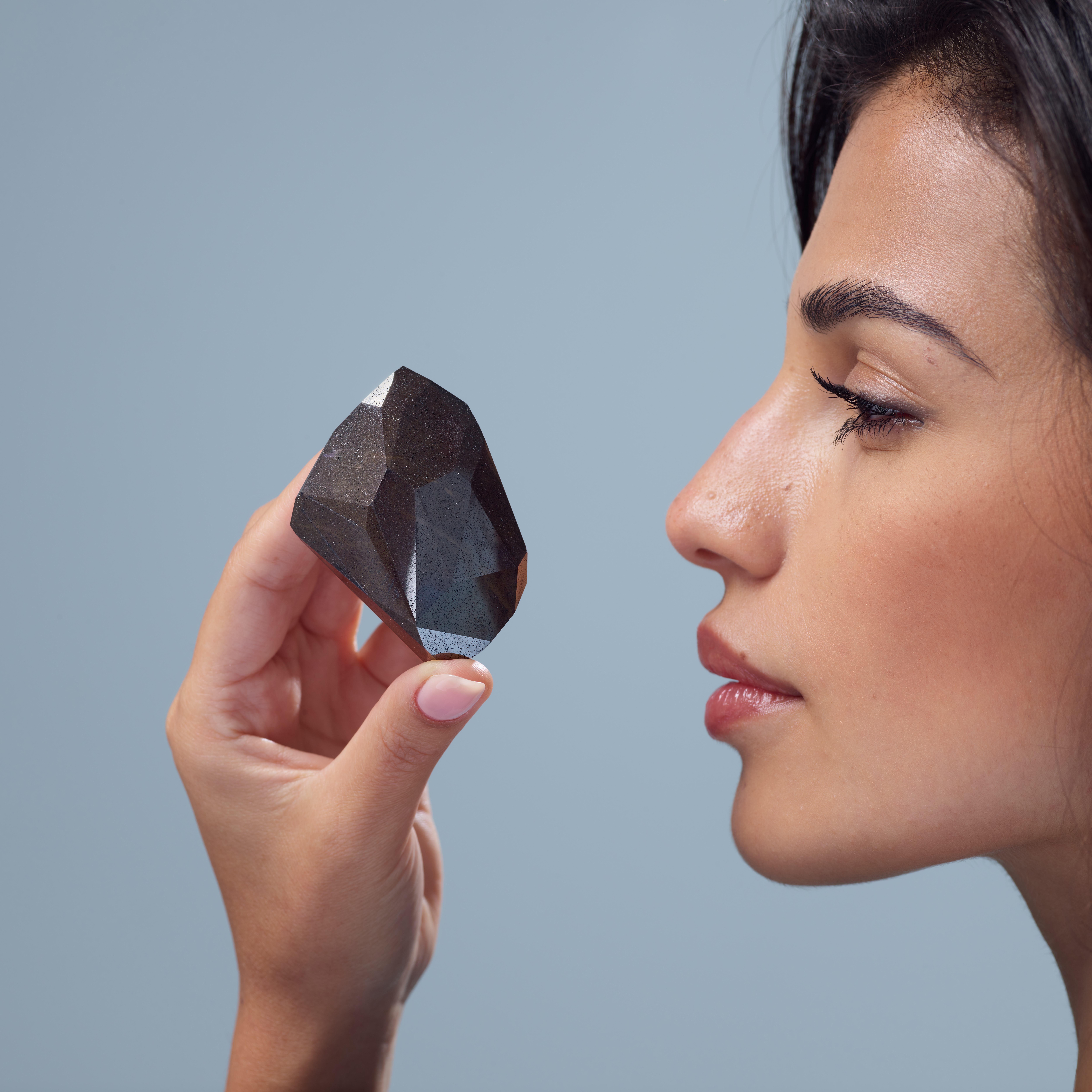 Accompanied by a certificate from the Guinness Book of Records, dated 2006, for the world's largest cut

June 2004); and a letter from the GIA describing the diamond in more detail - stating that it is an unusual

form of diamond known as carbonado.

natural colour, Fancy Black, as well as an appendix letter and an insurance appraisal from Gubelin, dated

Accompanied by a facsimile of a letter from Gubelin, dated 12th November 2021, confirming that the

diamond is the same stone as described in the Gubelin report no. 0407010.

A replica of the Enigma diamond was exhibited at the 2010 Shanghai Expo, viewed by over 71 million people over a 6 month period.

What makes carbonado diamonds such a unique stone? Most diamonds are usually uncovered inigneous kimberlite rock formed deep within the Earth. Carbonados differ in that they are found inalluvial, sedimentary deposits, close to or on the Earth’s surface, which may possibly suggest extraterrestrial origins. It is thought that this specific type of black diamond was created either from meteoric impacts producing natural chemical vapor deposition or an extraterrestrial origin - from supernovae explosions that formed diamond-bearing asteroids which ultimately collided with the Earth.

Detailed studies of carbonados could underline this theory; specimens contained micro-diamonds lacking the typical minerals usually present in other diamonds and also found deep in the Earth’s mantle. Instead, carbonados contain traces of nitrogen, hydrogen, abundant in interstellar space and, most importantly, osbornite, a mineral uniquely found in meteors. Dating from around 2.6 to 3.8 billion years ago, the age of these specimens also indicates that these diamonds are possibly not of this Earth. Today they are found exclusively in Brazil or the Central African Republic, which could add further weight to the theory that they are indeed treasures originating from interstellar space. Both these regions were connected for more than a billion years, forming the supercontinent, Rodinia; it was during this period that the area is believed to have been struck by meteorites, accounting for the distribution of carbonado diamonds to be found there today.

Carbonados have a dense polycrystalline yet porous structure and form an opaque diamond composed of randomly oriented and innumerable tiny diamond grains. These grains impede light refraction and increase absorption, thus giving the stone its black appearance. Analysis with Micro Raman laser spectroscopy revealed a unique and highly unusual characteristic of the Enigma - minute red crystals spread evenly throughout the stone. Notably, the hardness of these red crystals does not differ from that of the matrix, indicating that these could perhaps be red diamonds. The Enigma has a unique feature, in that most faceted diamonds have a single axis of crystal symmetry rendering them relatively easy to cut. However, the aggregated structure of carbonados is the toughest in existence, making them nearly impossible to cut and polish. According to the consignor, the Enigma was bought in the late 1990s and would have weighed over 800 carats in the rough form. It took over three years to produce this uniquely shaped faceted specimen. Being able to achieve a diamond which precisely weighs 555.55

carats, contains only 55 facets and has such a high degree of polish is almost inconceivable; it is a testament to the exceptional technical talent and extraordinary creativity required to cut and finish a carbonado diamond.

Furthermore, its design is imbued with significance. The shape is inspired by the Middle Eastern palm symbol, the Hamsa, a sign of protection and a tool of deflection against the evil eye, it also represents blessings, power and strength. The leitmotif of the number five derives from Hamsa and is considered extremely auspicious. In addition, black diamonds have come to be seen as the ‘stone of reconciliation’, a restorer of peace.

Historically, diamonds have been prized for their high degree of transparency and absence of colour; diamonds with a black coloration were typically reserved for industrial uses and larger specimens were only considered as collectors’ stones. Indeed, most gem-quality black diamonds used in contemporary jewellery design are treated to produce their black colour. So, to have a natural faceted black diamond of this size is an extremely rare occurrence. In recent years several natural and sizable black diamonds such as the Black Orlov, the Amsterdam Diamond, and of course, the Enigma have gained a certain notoriety, showing a clear trend that natural black diamonds are becoming increasingly desirable and sought after on the current day market.

This sale of the Enigma is a once in a lifetime opportunity to acquire one of the rarest, billion year old wonders known to humankind.