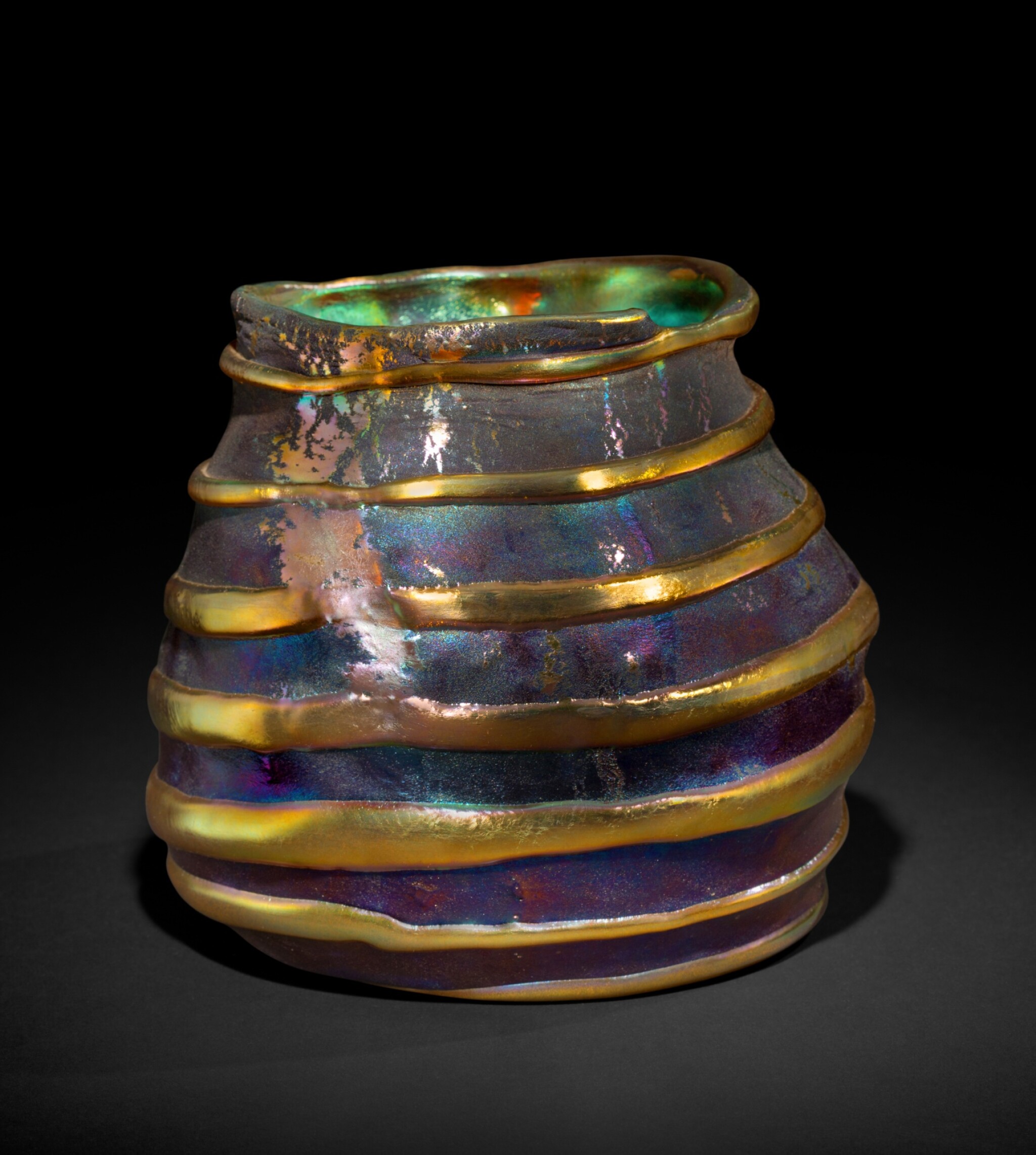 Overall in very good condition. This extraordinary work was previously in the collection of Walter P. Chrysler, Jr., and displays outstanding scale and robust form. When viewed firsthand, the vase displays a rich indigo ground decorated with masterfully applied spiraling gold ribbons with luminous iridescence. The exterior surfaces are wonderfully irregular and tactile and present with scattered air bubbles, particulate inclusions and surface irregularities which are inherent in the making and intentional to the Lava technique to promote the naturalism of the design. The glass surfaces with scattered and very faint surface scratches consistent with age and gentle handling. The interior of the vase displays a rich turquoise iridescence. The underside of the vase is applied with the Chrysler accession number and a Doros Collection accession number. The pontil with some minor edge losses which is common, inherent to production and only visible when the vase is turned over. An exceptional work with impressive scale and decoration, making it a superlative example from the firm’s iconic “Lava” series.

The blown glass objects produced by Tiffany Studios were internationally acclaimed for their forms based on nature and the use of vividly colored glass that ran the full gamut of the spectrum. The firm’s so-called “Lava” vases were a rare and exciting anomaly. Apparently produced only in 1906-1907 and again around 1916, it was originally theorized that the motif was inspired by Louis C. Tiffany’s observation of Mt. Aetna erupting during one of his many European trips. That story, however, has been proven to be apocryphal. A far more likely design source can be found in Tiffany’s love of Japanese art, which had a significant influence on much of his aesthetics. He was a serious collector of Asian decorative arts, including ceramics, and “Lava” vases are Tiffany’s fairly obvious attempt to emulate, in glass, 17th Century Japanese raku-fired ceramic tea bowls.

Lots 211 and 212, both from the initial production period, are among the finest examples ever produced by the company. They superbly demonstrate all the elements that make “Lava” vases so desirable: asymmetrical bodies with uneven, slightly undulating rims and multi-hued exterior iridescences; navy-cobalt overlays, with a texture like weathered leather, interspersed with irregular patches exposing the transparent yellow ground; and iridescent gold threadings and applications of varying dimensions and thicknesses dripped around the body. The bright gold iridescence on the interiors serves as a distinct counterpoint to the dark blue exterior.

The extreme rarity of “Lava” vases is due to the incredible technical difficulties involved in making a multi-layered object of different glasses with the additional complication of thick, applied sections. It is also highly likely that they were too artistically adventurous for most early 20th Century collectors. One hundred and fifteen years later, “Lava” vases are considered by many to best epitomize the creative supremacy of Tiffany’s blown Favrile glass.