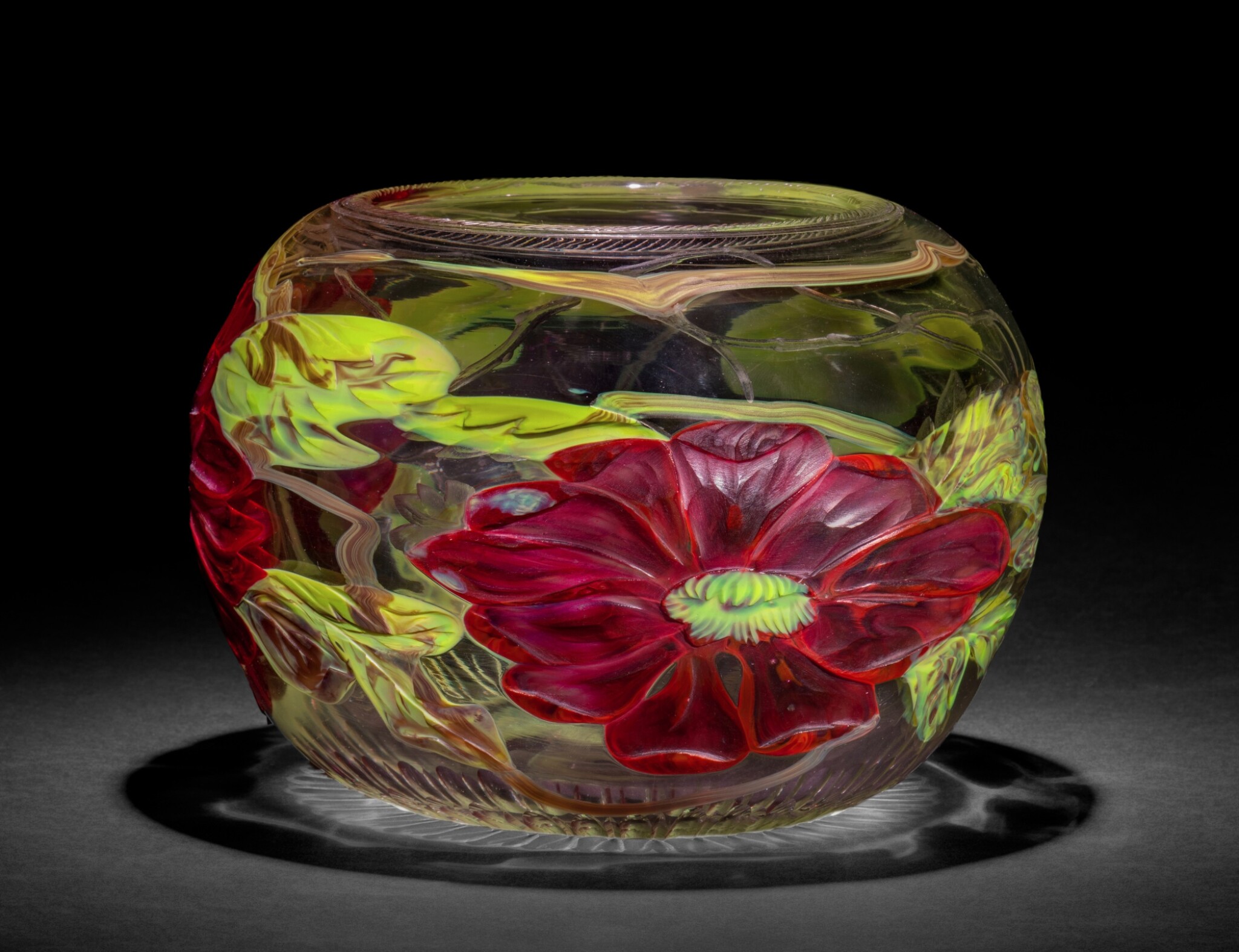 Overall in very good condition. When viewed firsthand, the bowl displays a palette of rich cranberry and chartreuse with olive green accents. The cameo work is expertly executed imparting the work with wonderful naturalistic texture and dimension. The glass with occasional minor air bubbles, particulate inclusions and surface irregularities which are inherent in the making and not visually distracting. The glass surfaces throughout with scattered, very fine and light surface scratches consistent with age and gentle handling. The underside of the vase is applied with a Doros Collection accession number, a second accession number, and some minor traces of adhesive residue. An extraordinary work exemplifying the technical mastery of Tiffany’s craftsmen.

Cameo glass, in which the exterior is formed into a design in relief, was exceptionally popular in late-19th Century Europe. The commercial success of Émile Gallé in France and Thomas Webb & Sons in England was the catalyst for numerous imitators throughout the Continent. Tiffany, through his many trips to Europe, and Arthur Nash, his British-born and trained glasshouse superintendent, were very aware of these European products. It is therefore no surprise that the Stourbridge Glass Company incorporated cameo work soon after it began operations.

Although inspired by the European production, Tiffany’s cameo glass differed in three very important elements. Most of the foreign manufacturers cased, or covered, the hot glass with one or two layers of different colored glasses and then used an acid bath that would dissolve the unwanted sections and leave a design in low relief. The designs on Tiffany’s cameo vases, in contrast, were created largely by using a cutting or engraving wheel rather than acid. Also, Favrile cameo pieces were usually not reliant on only one or two layers of glass. Instead, sections of hot glass were applied and padded onto the body to introduce additional colors. Finally, the decorative motifs favored by Tiffany were entirely different than much of the European work. While the latter was generally stiff and very literal, Tiffany’s designs were far more artistic and impressionistic.

One of Tiffany’s most valued employees during this early period was Fredolin Kretschmann (1853-1898). Born in Austria, Kretschmann moved to England when he was 19 years old, received training at a glasshouse near Birmingham, and was soon recognized as one of the world’s leading glass cutters and engravers. Tiffany supposedly met and hired Kretschmann while the latter was preparing an exhibition of his work at the 1893 Columbian Exposition. Kretschmann’s finest pieces, some of which was sold at the then-incredible price of $1,500, were offered to some of the glasshouse’s most important clients, including the Goulds, Havemeyers and Vanderbilts.

Kretschmann tragically died at the age of 45. The Cameo “Rose” Bowl (lot 224), likely made by him shortly prior to his death, epitomizes his supreme skill and artistic acumen. The transparent bowl, with a coined top rim, features on the front and side glorious, large crimson and plum dahlias in relief with superbly carved petals and bright chartreuse pistils. Bordering the blossoms are brown-streaked chartreuse leaves and stems, also finely engraved. The piece is an absolute tour de force created by the hands of a master craftsman.