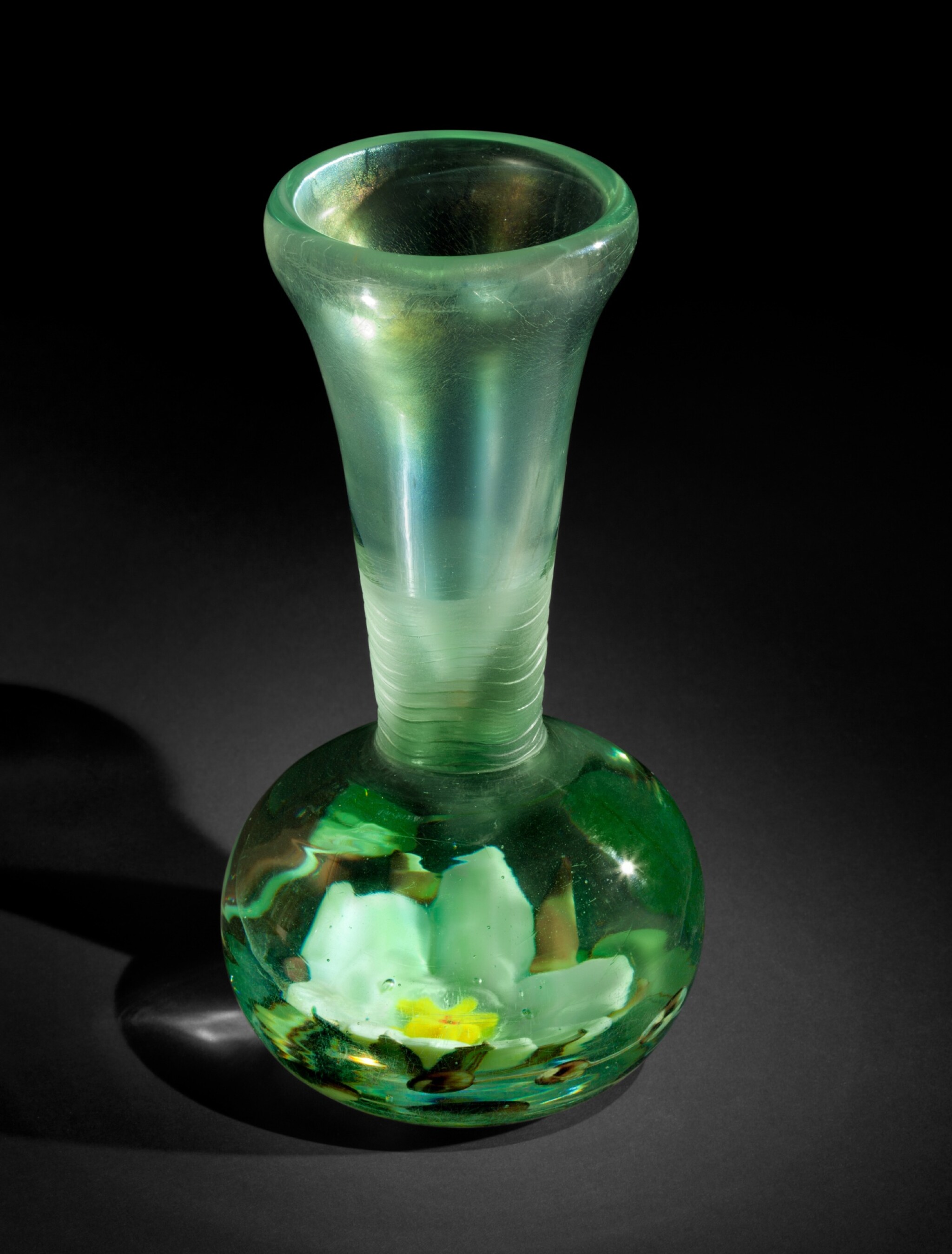 Overall in very good condition. When viewed firsthand, the aquatic effect of the glass can be truly appreciated. The technique perfectly emulates the experience of observing an object in water: the volume of the water dynamically distorts, conceals, and reveals aspects of the object as the observer’s viewpoint changes. From a higher vantage, the flower can be seen with clarity; from a lower vantage, the seaweed vines come into view. This dynamic visual effect enhances the naturalism of the work. The slightly green transparent glass contrasts nicely with the frosted neck, which is iridized on the interior. The carved ripple detail at the base of the neck further promotes the aquatic effect. The glass with occasional minor air bubbles, particulate inclusions and surface irregularities which are inherent in the making and not visually distracting. The glass surfaces throughout with scattered, very fine and light surface scratches consistent with age and gentle handling, with some slightly more pronounced surface scratches occurring around the widest point of the lower globe. The interior of the neck with some very minor trapped debris particles, not visually distracting and only visible upon close inspection. The underside of the vase is applied with a Doros Collection accession number. An extraordinarily sculptural and naturalistic work that is a superb example of the Aquamarine technique.

“Aquamarine” glass was one of the last innovations introduced by Tiffany Furnaces. Louis C. Tiffany was fascinated by water: he sailed a small sloop outside Oyster Bay, designed and produced several large fountains, and even had a small stream traverse the interior of his Laurelton Hall mansion. It is therefore not surprising that he desired a type of glassware that directly reflected his affinity for water.

In July 1913, Tiffany sent Arthur E. Saunders, one of his gaffers, to Bermuda to examine the marine life and vegetation in the surrounding tropical waters from a glass-bottomed boat. The intent was for Saunders to replicate, in glass, what he saw when he returned to Corona. The final result, after a surprisingly short period of experimentation, were “Aquamarine” vases that met with immediate critical success. Featuring thick, heavy bodies of transparent green-tinted glass encasing a highly naturalistic motif, the pieces were highlighted in magazine articles and Tiffany & Company’s Blue Book from 1914 to 1917, priced as high as $300. This exorbitant price was an indicator of how exceptionally difficult it was for the glasshouse to produce these objects, some of which weighed as much as 25 pounds. And even after the gaffer had successfully finished his role, many examples shattered and broke while being annealed.

The example offered here is likely from a group of “Aquamarine” vases Tiffany Studios exhibited at the 1915 Panama-Pacific International Exposition held in San Francisco. A large, yellow-centered water lily, surrounded by olive-green foliage, is situated in the center of the spherical body of thick transparent green-tinted glass. The underwater effect is further heightened with a small trapped air bubble placed above each petal and the finely engraved waves on the lower half of the neck’s exterior, an enhancement unique to this vase.