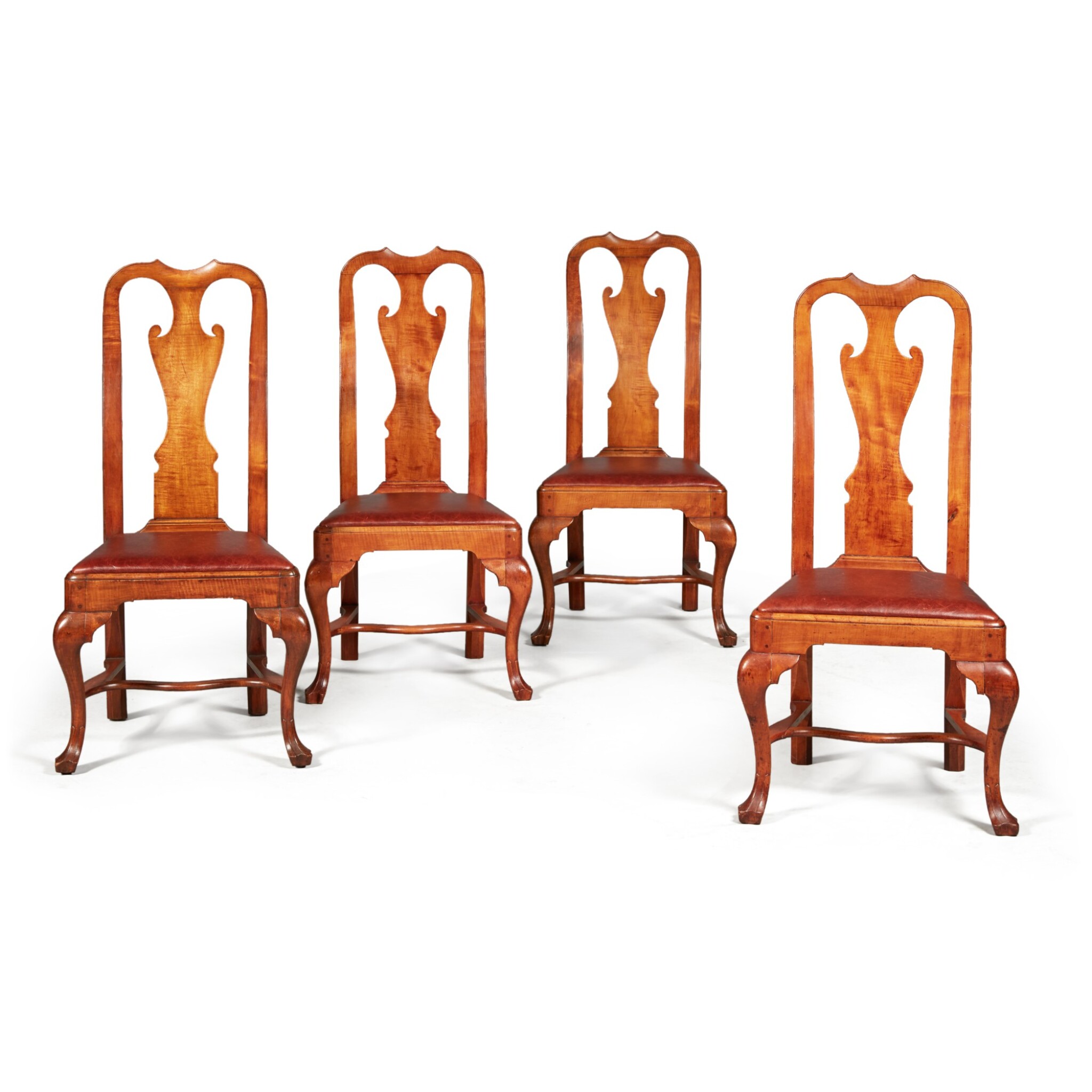 For two of the chairs:

Christie’s, New York, October 13, 1983, lot 286 (incorrectly identified as walnut in the catalogue). The catalogue notes under condition that one chair has an old crack in the shoe;

Made of tiger maple, these side chairs are rare survivals of early Philadelphia seating furniture in the Queen Anne style. With a yoke crest, high plinth vase-shaped splat, straight stiles with an incised line over the splat, cabriole legs, trifid feet, and shaped flat stretchers, the chairs are identical in design and made as part of the same set. They display the same dimensions, maple figuring, and corner blocks. The chairs are numbered I, II, IIII, and IIII, and II on their front rails. One of the chairs numbered IIII had its mark added with a chisel while the other mark was scratched into the rail and perhaps added at a later date. There are three period seat frames marked I, II, and V which are unusual for being laminated horizontally and made of eight boards. The four side chairs were on loan to Stenton, the Georgian house built by James Logan (1674-1751) in Philadelphia in 1730. They were exhibited at Stenton in the yellow lodging room which originally contained maple furnishings including a set of “12 Maple Chairs w[i]th Worsted Damask Bottoms” valued at £16 10 and “1 Maple Chest of Drawers & Table” valued at £7.1

Two additional chairs from the set were formerly in the collection of Mrs. C. Hallam Keep and sold as part of her estate at Parke-Bernet Galleries on October 19, 1963.2 They were purchased by Jess Pavey for $1,400, a considerable sum at the time. He sold them to Martin Fuller, a Manhattan collector. After his death, they were sold to Jonathan Trace and subsequently sold to Leigh Keno. A private collector purchased the chairs from Leigh Keno in 1996 and gave them to Stenton. They also have early laminated seat frames and one has a repair to the left ear.

One chair from this set may correspond to a side chair that appears in the oil painting, Woman on Sofa Reading Letters, by George Cochran Lambdin (American, 1830-1896). George Lambdin was the son of the well-known portrait painter James Reid Lambdin and spent his career in Philadelphia. The painting descended in the Lambdin family and is in the collection of the Schwarz Gallery, Philadelphia.

Several other related Queen Anne maple side chairs with conforming stiles, lambrequin-carved knees, shaped flat stretchers and trifid feet include one at the Art Institute of Chicago,3 one at the Henry Ford Museum,4 and one sold in these rooms, The Collection of Mr. and Mrs. Lammot Du Pont Copeland, January 19, 2002, lot 259.

Sotheby's would like to thank Laura Keim and Jay Stiefel for their assistance with the research for these chairs.

1 Laura Keim, “The Restoration of Stenton’s Yellow Lodging Room,” Incollect. November 21, 2017. The Logan high chest referenced in the inventory is in the collection of Stenton and exhibited in the yellow lodging room. See fig. 7.

2 The chairs were sold at Parke-Bernet Galleries, Inc., American Furniture From the Estate of the Late Margaret Williams Keep, October 19, 1963, lot 178.