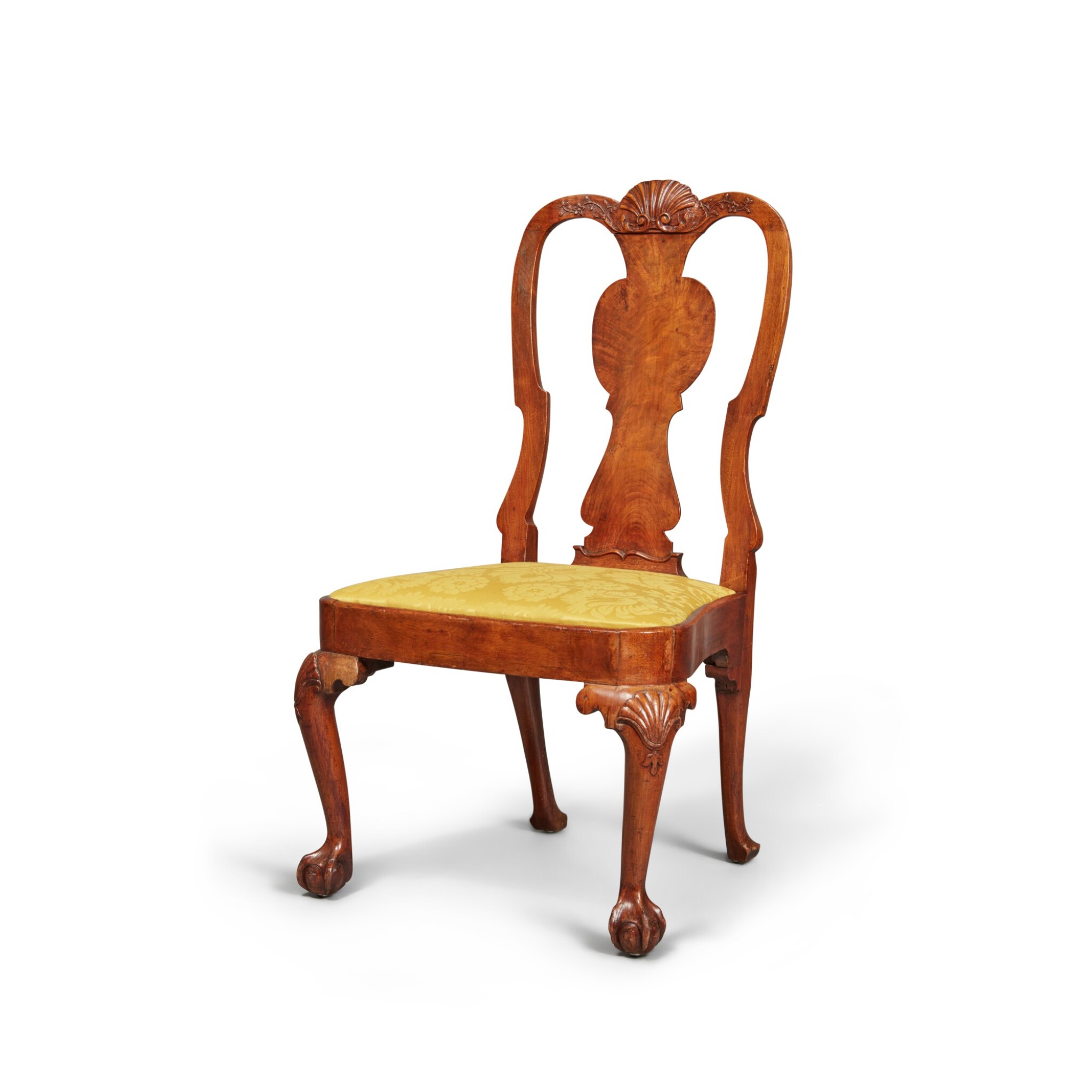 This side chair is numbered VIII on the seat rail and accompanying slip seat.

This side chair is numbered VIII on the seat rail and accompanying slip seat. An identical side chair from the same set was sold in these rooms, The Collection of Doris and Richard M. Seidlitz, January 30, 1988, sale 5682, lot 1770.1 Both are part of a group of chairs formerly attributed to New York but reattributed to Boston in 1996 based on research published by Leigh Keno, Joan Barzilay Freund and Alan Miller in “The Very Pink of the Mode: Boston Georgian Chairs, Their Export and Their Influence,” in American Furniture 1996, edited by Luke Beckerdite (Milwaukee, WI: The Chipstone Foundation, 1996), pp. 266-306.  Other chairs from the group include a set of six with a history of ownership in the Bromfield-Weld families of Boston. This set was originally owned by Henry Bromfield, a prominent merchant, and Margaret Fayerweather (1732-1761), who married in 1749. All six chairs retain their original polychrome needlework seats and are represented in the following collections: two at Historic Deerfield, two at the Brooklyn Museum, and two at the Museum of Fine Arts, Boston.

A set of eight chairs from this group with carving attributed to John Welch (1711-1789) was originally owned by Charles (1698-1758) and Grizzell (Eastwick) (1709-1796) Apthorp of Boston. The chairs have pierced shells on the crest and flat stretchers. Two were sold in these rooms on January 31, 1993, sale 6392, lots 1279 and 1280. One is now in a private collection and the other in the collection of the Chipstone Foundation. Four others were sold in these rooms, Highly Important Americana from the Stanley Paul Sax Collection, January 16-17, 1998, sale 7087, lots 265, 266, 513 and 514.  Of the two remaining chairs, one is in the collection of the Metropolitan Museum of Art and the other is in a private collection.  Another set of six side chairs in a private collection with pierced crests but without stretchers descended in the Pickman family of Boston. An additional example with carving on the crest is illustrated in Bernard & S. Dean Levy, Opulence and Splendor: The New York Chair, 1690-1830, New York, 1984, p. 5.

The carving on this side chair is attributed to the Boston carver, John Welch (1711-1789), who was born in Boston in 1711 and may have apprenticed to the Boston carver George Robinson (1680-1737) before beginning work as a journeyman by 1732.2  By 1733, he was in business at a shop on the Boston wharf executing ship and furniture carving in addition to architectural carving for the courthouse (the present Massachusetts State House) when it was rebuilt after a fire in December of 1747. He collaborated with John Singleton Copley during the 1770s and of the thirty-two extant Rococo style frames on Copley portraits, twenty-five can be documented or attributed to Welch. He continued to work after the Revolution and served as a Captain in the Ancient and Honorable Artillery and a pew holder at King’s Chapel. He owned a house on Green Lane, near Paul Revere's house, which was large enough to quarter fourteen British soldiers after the French and Indian War. He died in Boston on February 9, 1789 and was buried in the church cemetery, leaving an estate valued at 58 pounds 9 shillings.3 The claw feet are typical of those produced by Welch during the 1740s and early 1750s.  Similar feet are found on a card table with carving attributed to Welch that descended in the Dalton family of Boston.4