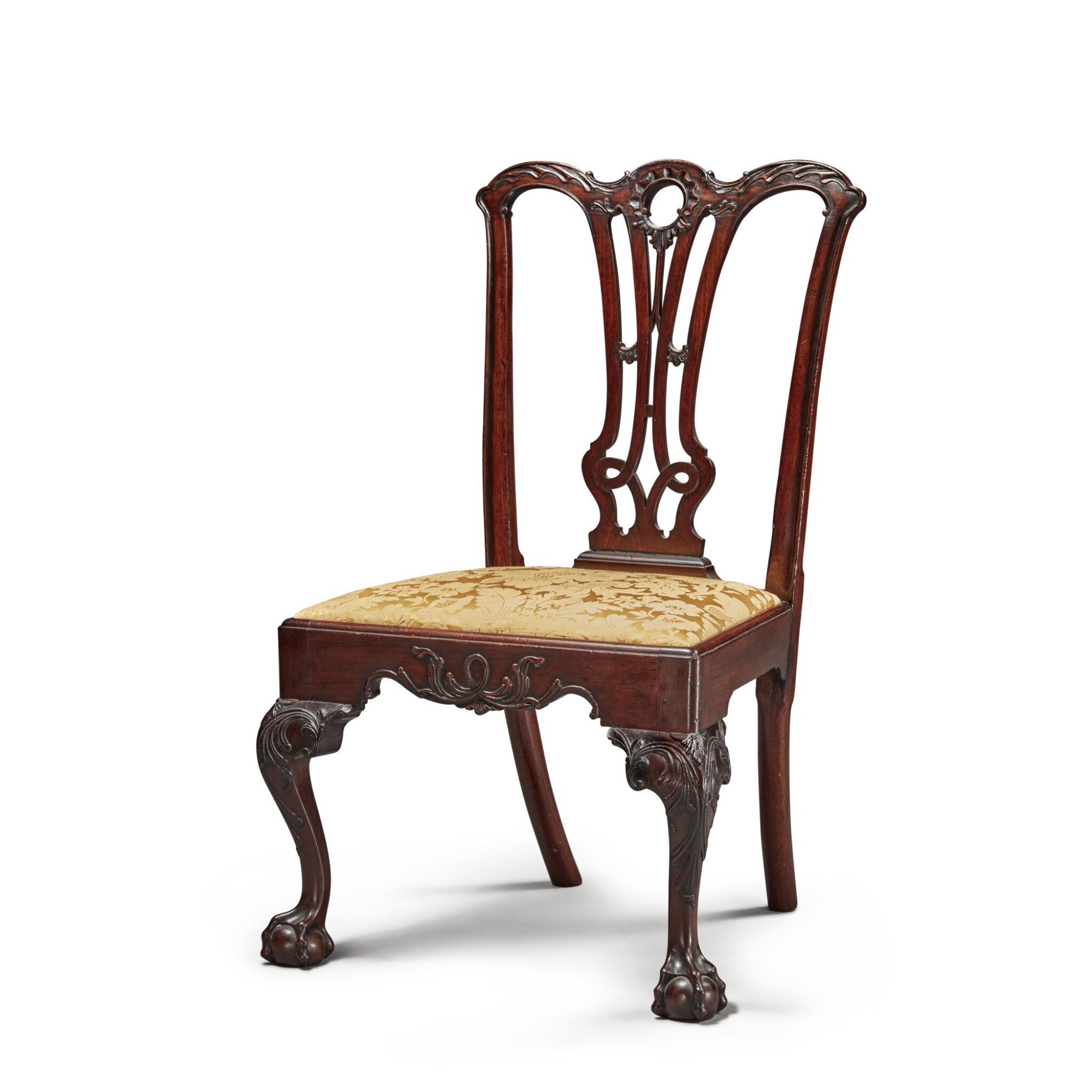 This side chair retains a rich dark historic surface and is number XX of a very large set of at least twenty chairs. Eight chairs from the set are in the collection of Winterthur Museum.1 Another side chair from the set is in the Mabel Brady Garvan Collection at the Yale University Art Gallery.2 Patricia Kane notes that the latter chair was purchased from the “Misses Biddle” of Philadelphia as part of a group sold to Charles R. Morson and Charles W. Lyon, both of New York, who subsequently sold one to Francis P. Garvan. Presumably, this chair and the others at Winterthur and Yale University are part of this large group.

This chair represents a popular chair pattern made in Colonial Philadelphia with a pierced splat design adapted from Plate XIII and Plate XIV of The Gentleman & Cabinet-Maker’s Director (London, 1762) by Thomas Chippendale. It is associated with the shop of Benjamin Randolph (1737-1792) on the basis of shared similarities with labeled Randolph side chairs including two numbered III and IV in the Karolik Collection at the Museum of Fine Arts, Boston and two numbered I and II in a private collection.3 These chairs are the focus of Philip Zimmerman’s article, “Labeled Randolph Chairs Rediscovered,” American Furniture 1998, edited by Luke Beckerdite, pp. 81-98.

Several other related chairs are known representing multiple shop traditions. One is illustrated by Joseph Kindig, III in The Philadelphia Chair, 1685-1785 (York, PA, 1978): fig. 54. An armchair at Yale University numbered II on the seat frame and slip seat was formerly in the collection of Louis Guerineau Myers.4 An armchair at Winterthur displays variations in the carving on the splat and knees.5 One from the Collection of Abram R. and Blanche M. Harpending was sold in these rooms, February 1, 1985, lot 609. Two other side chairs were sold in these rooms, The Highly Important Americana Collection of George S. Parker II from the Caxambas Foundation, January 19, 2017, lots 2119 and 2120. Another with a scalloped seat rail is illustrated by Israel Sack, Inc., American Furniture from Israel Sack Collection, Vol. II, p. 313, no. 174.