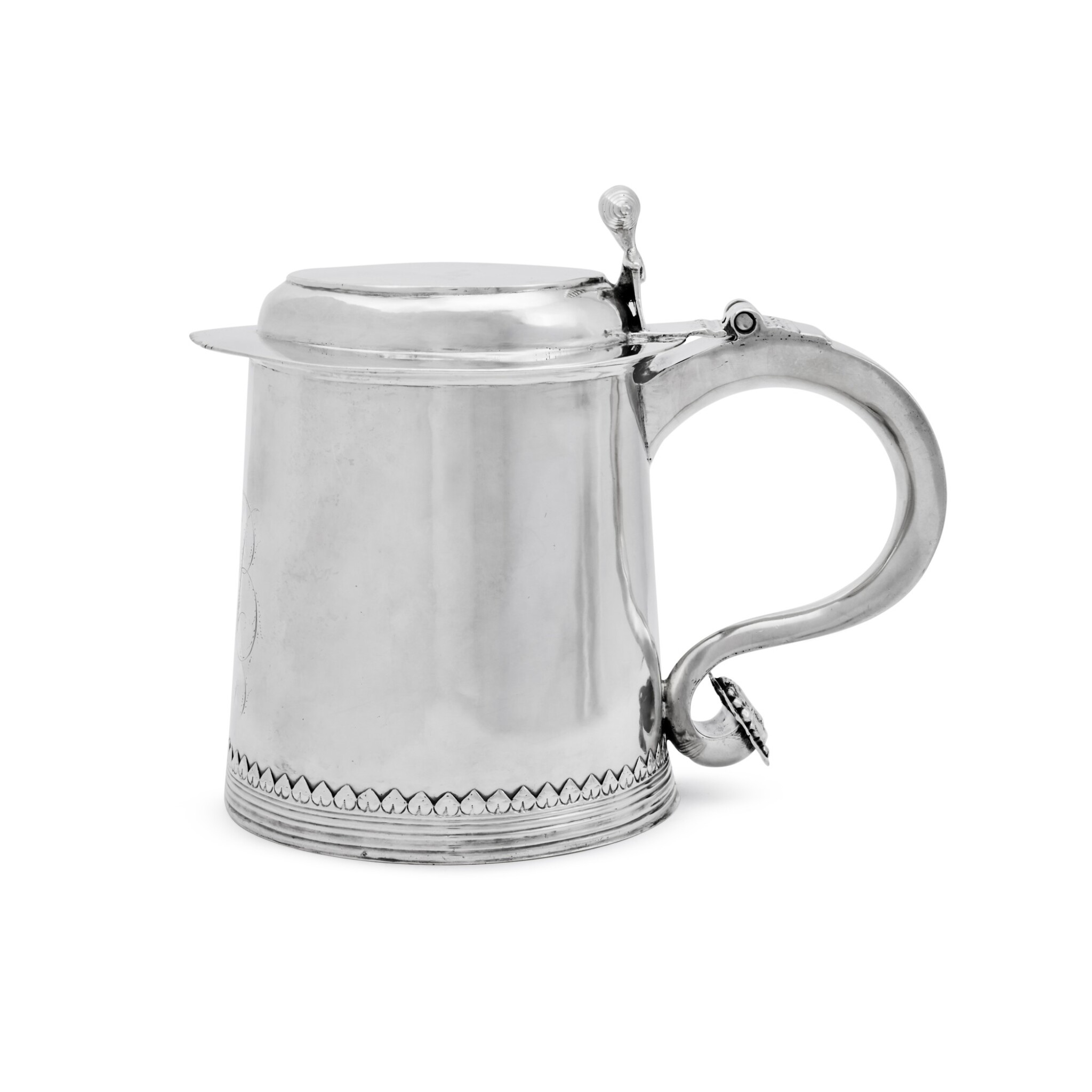 tapered cylindrical, applied with cut-card work above molded foot rim, flat-domed cover with corkscrew thumbpiece and shaped peak, the hinge flanked by meander wires, scroll handle wtih shield terminal applied with a female face, the front engraved circa 1780 with script monogram GJB, marked near center of base barred IN with pellets in heart, traces of three marks on cover, the base engraved with scratch weight 33=17; restored where spout removed.

As noted re. removal of later spout. Restored surface.

Gunning Bedford, Jr. and Jane Ballereau Parker
Henry Francis DuPont
Acquired by Walter M. Jeffords by exchange, May 1934, sold
Sotheby's New York, October 28-29, 2004, lot 658
Boston 1956: The Boston Museum of Fine Arts, Colonial Silversmiths: Masters & Apprentices, 1956, no. 302, fig. 113
Philadelphia 1956: The Philadelphia Museum of Art, Philadelphia Silver, 1682-1800. April 14-May 27, 1956, no. 305.
The script initials are those of Gunning Bedford, Jr. (1747-1812) and his wife Jane Ballereau Parker (1746-1831).  Born in Philadelphia, Bedford Jr. graduated from Nassau Hall (later Princeton University) in 1771 and practiced law at Dover and later in Wilmington.  During the Revolution he acted for a time as Washington's aide-de-camp.  After the war, he was elected to the Delaware House of Representatitves and represented Delaware in the Continental Congress between 1783 and 1786.  He was a member of the Constitutional Convention, and is credited with helping establish equal representation for large and small states in the Senate.  He was attorney-general of Delaware until 1789, thereafter U.S. district judge for Delaware until his death.  In later life he helped Wilmington Academy and the abolitionist cause from his farm at Lombardy Hall.

This tankard, dating from over a half-century before the Bedford's marriage in 1772 or 1773, may have come from the family on either side.  The Bedfords were originally from Jamestown, Virginia, though they had settled in Philadelphia by Gunning Jr.'s birth (the fifth of seven children) in 1747.  Jane Bedford's father was James Parker (1714-1770), who arrived in Philadelphia from New York in 1733 and worked as a journeyman printer for Benjamin Franklin.  With Franklin as a silent partner, Parker returned to New York and published The New York Gazette before becoming public printer for the province of New York, then controller of the colonial posts.  A punch strainer by Peter David, c. 1740, which belonged to James Parker is in the collection of the Delaware Historical Society (see Deborah Dependahl Waters, Delaware Collections in the Museum of the Historical Society of Delaware, HSD: 1984, no. 25, p. 52).

Other pieces of silver with the foliate GJB initials of the Bedford, Jrs. include a teapot by Eliakim Garretson, Wilmington (ibid. no. 42, p. 79) and a salver by Myer Myers of c. 1760 (ibid. no. 28) which David Barquist suggests may have belonged to James Parker and his wife Marie Ballereau before passing to the Bedfords.