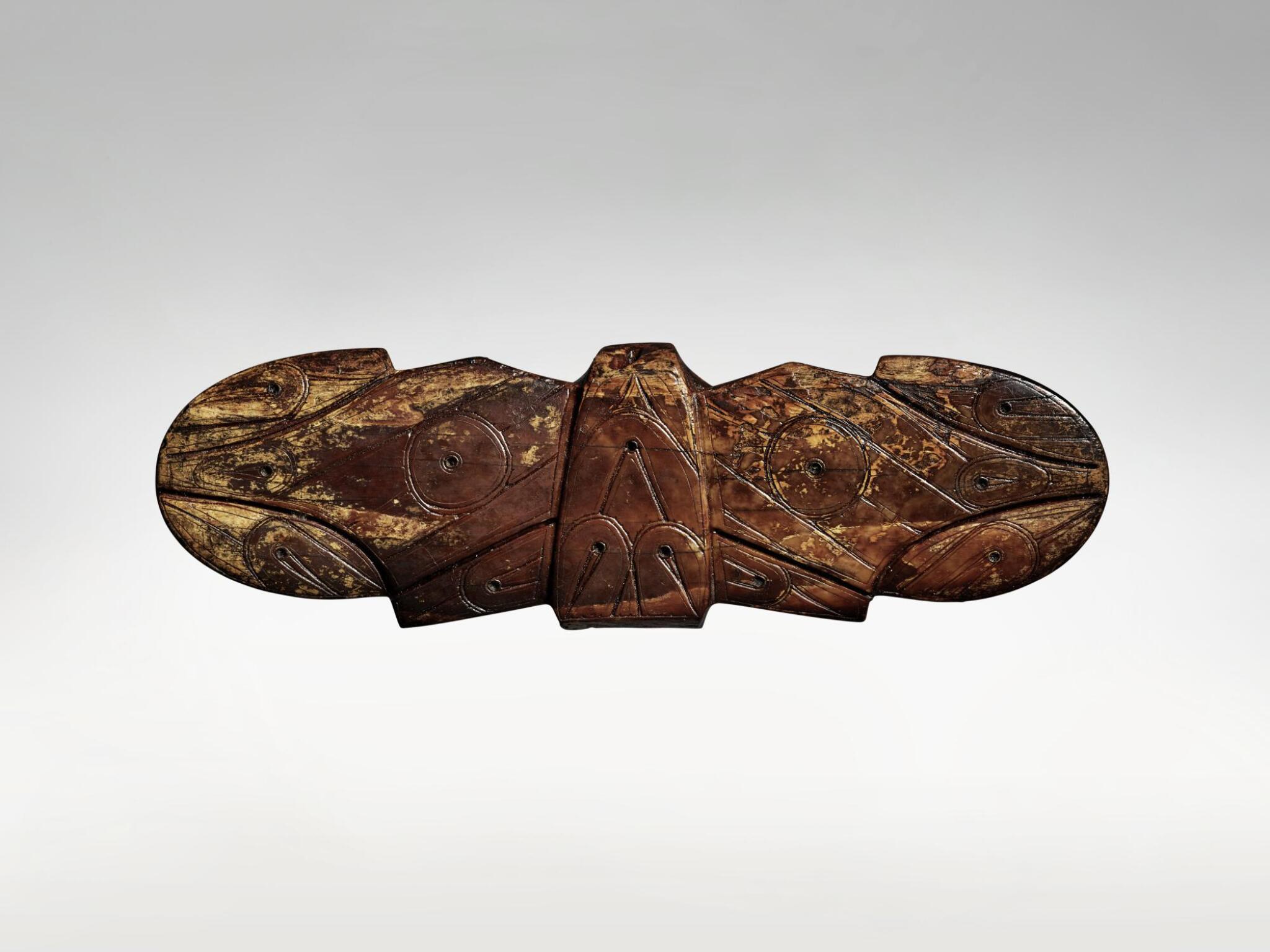 Winged objects are perhaps the most astonishing of the ancient ivories of the Bering Strait. For Henry B. Collins, author of the first classic study on ancient Old Bering Sea objects, Prehistoric Art of the Alaskan Eskimo, winged objects were the masterpieces of Eskimo art (Collins, Prehistoric Art of the Alaskan Eskimo, Washington, D.C., 1929, p. 9).

These enigmatic objects were for a long time thought to perhaps represent emblems or crests from the tops of wooden ceremonial staffs; Collins wrote that they "could hardly have had a practical use; it was no doubt employed in some ceremony [...] or perhaps as a charm used by the boat captain to bring success in the hunt." (ibid.)

Their purpose was clarified when excavations at Ekven and Uelen on the Chukotka Peninsula in far eastern Russia revealed winged objects fastened to the ends of wooden shafts tipped with socket pieces and heads of carved ivory. Too short to have been used as spears, it was evident that these objects were harpoons and that the heavy weight of the ivory harpoon head and socket piece at the front must have needed to be balanced by a counterweight at the lighter end of the shaft.

The origin of this remarkable solution is unclear. However, Arutiunov argues that the first counterweights were made of the atlas vertebra (which connects the spine to the base of the skull) of a seal or walrus. This argument is particularly compelling as in cross-section many winged objects, including the present example, closely resemble the form of an atlas vertebra. Within the cosmological framework which underpinned the significance of all ancient Bering Strait ivories it is interesting to note that the atlas vertebra was "thought by historic Eskimos of Chukotka to be the seat of the animal's soul." (Arutiunov in Fitzhugh, Hollowell, and Crowell, eds, Gifts from the Ancestors: Ancient Ivories of Bering Strait, Princeton, 2009, p. 56, fig. 8).

Recent scholarship shows that Collins notion of the objects serving as a means of bringing "success in the hunt" contained some truth. While these objects existed as counterweights in a physical and practical world, they also occupied a cultural and spiritual one as "winged objects". As Fitzhugh notes, "the hierarchical nature of the harpoon spirit cluster – from the bird-figured harpoon head, to beast-figured socket, to god-like counterweight – is not casual or accidental […] winged objects represent master spirits and their animal and human subjects. No doubt these beings had specific identities known to [Old Bering Sea] people through mythology and folklore […]" (Fitzhugh, ibid., p. 183). The presence of these predatory creatures could augment the power of the object, and the Lawrence winged object contains an apparent reference to the beastly, quasi-human face that may represent a spirit-controller of animals similar to the tuunraq spirit-helper of Yup'ik shamans. It is positioned at the center of the composition, flanked on either side by the complex, notched wing outline characteristic of Old Bering Sea II winged objects. The composition of the intricate curvilinear designs and pierced circles within the outline of the wings is balanced and seemingly symmetrical, but with that degree of variation which, as Arutiunov notes, is characteristic of the "natural symmetry" of a flower or other object from the natural world (ibid., p. 134). There is an almost spectral apparition on the ventral side, its "body" emerging in relief from the center of the composition, its wings spread. The characteristic nucleated circle designs give this creature the appearance of eyes and a mouth that seems to emit a silent howl.