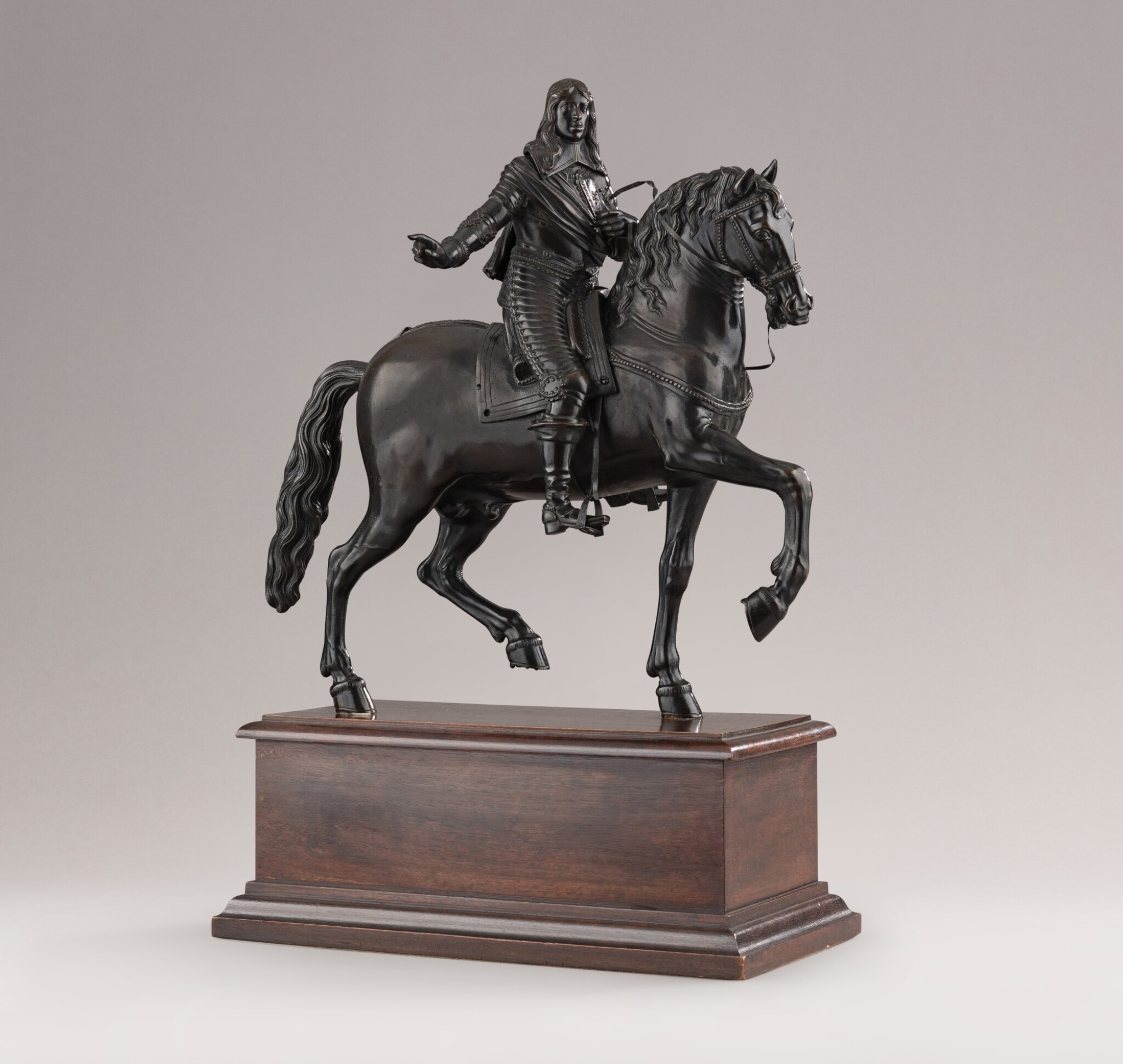 bronze, dark brown patina; on a wooden base

For further information on the condition of this lot please contact ulrike.goetz@sothebys.com
Related literature
M. Leithe-Jasper, Renaissance Master Bronzes from the Collection of the Kunsthistorisches Museum, Vienne, pp. 246-252.

This bronze belongs to a series of bronze equestrian statuettes produced by Caspar Gras in around 1648 and representing members of the Habsburg family (Leithe-Jasper, op. cit.) Five casts are preserved in the Kunsthistorisches Museum, Vienna and the cast of Ferdinand III (inv. no. 6020) can be traced as far back as the 1750 inventory of the Imperial Treasury. One bronze from the series, also depicting Archduke Ferdinand Karl but showing him seated on a curveting horse rather than a pacing one, is now in the Victoria and Albert Museum, London (inv. no. A 16-1960).

Caspar Gras was born in Würzburg and received his training, first as a goldsmith, within his father's workshop. From 1600, he worked under the sculptor Hubert Gerhard, one of the principal exponents of Giambologna's style in the north. He left for Innsbruck in 1602 in the retinue of Archduke Maximilian where Gras held a variety of positions at court and received most of the royal commissions. His first large-scale work was the Trautson epitaph in the Viennese Church of St Michael, which was shortly followed by a funerary monument for Archduke Maximilian in the Cathedral of St Jacob at Innsbruck. He further executed the Leopold V fountain in Innsbruck between 1622 and 1630, which was not only his greatest work, but one of the most important bronze monuments produced in the 17th century in Southern Germany and Austria. Gras was considered the last exponent of Mannerism, in the tradition of Giambologna, Tacca and Gerhard.

The series of statuettes adhere to a typology that was developed by followers of Giambologna in Florence such as Pietro Tacca who designed the equestrian portrait of King Philipp IV and Duke Karl Emanuel of Savoy. However, with the Leopold V monument, Gras became the first European sculptor to realize the feat of executing a monumental bronze equestrian portrait in which the enormous weight of a rearing horse and rider is balanced on the delicate twin points of the horse's rear hooves. This extraordinary technical achievement, which must have made Gras famous far beyond Innsbruck, was surely the catalyst for this series of bronzes that showcase this feat on a smaller scale.

Each of the bronzes in the series incorporates separately cast riders, heads, swords and batons, following a practice of preparing maquettes for monumental equestrian statues with interchangeable elements, which is documented in Pietro Tacca’s Florentine workshop. All of the figures differ in small details, including the finish of the armour and the horses' sternum straps, the position of the horses' tails, the attitude of the horses (curveting or pacing) and the portraits of the riders. Several casts, like this one, have delicately punched saddle cloth and the serrated leather straps and bridle. Leithe-Jasper categorized these slight variations between the bronzes into six types, with the present cast closest to his Type 5, also represented by Vienna’s Archduke Ferdinand Karl which is distinguished by his head turned to the right, his sash tied with a bow at the back and passing over his right shoulder. The Vienna version is the only model displaying the Order of the Golden Fleece.

Two very similar casts of identical pacing horses from the Galleria Sangiori, Rome, were sold in Sotheby’s London, 12 April 1990, lots 53 and 54, there catalogued as “Florentine or Innsbruck”, which most likely represent Philip IV of Spain and the Emperor Ferdinand III. In these models, the horse is pacing as opposed to curveting, the tail hangs down straight and the mane falls to the right side instead of to the left (Leither-Jasper, op. cit., p. 246). Another cast of an unidentified Habsburg ruler was sold at Sotheby’s New York 22 May 2001, lot 47 with the same model of the pacing horse, with the exception of the tail which is curled. The authorship of this equestrian group has variously been given to Gras and to Gian Francesco Susini, the argument for the latter attribution was proposed by Baldinucci and is due, in part, to the existence of six statuettes in the Museo Nazionale Parma with Medici rulers on horseback, two of which are similar to the present bronze and the Sangiorgi casts as they depict walking horses.

The identity of this sitter has traditionally thought to be Ferdinand Karl (1628-1662), the eldest son of Archduke Leopold V and Claudia de’Medici, daughter of Ferdinand I. His father had founded the Tyrolean cadet branch of the Habsburgs and Ferdinand was to be his successor. As he was only four years old when his father died, his mother reigned in his stead. In 1646 he attained his majority and began to rule over Tyrol and the Austria. Ferdinand Karl was married to Anna de Medici (1616–1676), a niece of his mother with whom he had three daughters. Ferdinand Karl died in 1662 at the age of thirty-four. An exchangeable bronze head, of Archduke Ferdinand Karl or Archduke Leopold, later Emperor Leopold I (inv. no. 5995), similar in facial features to the head of the present figure, is also preserved in the Kunsthistorisches Museum, Vienna.