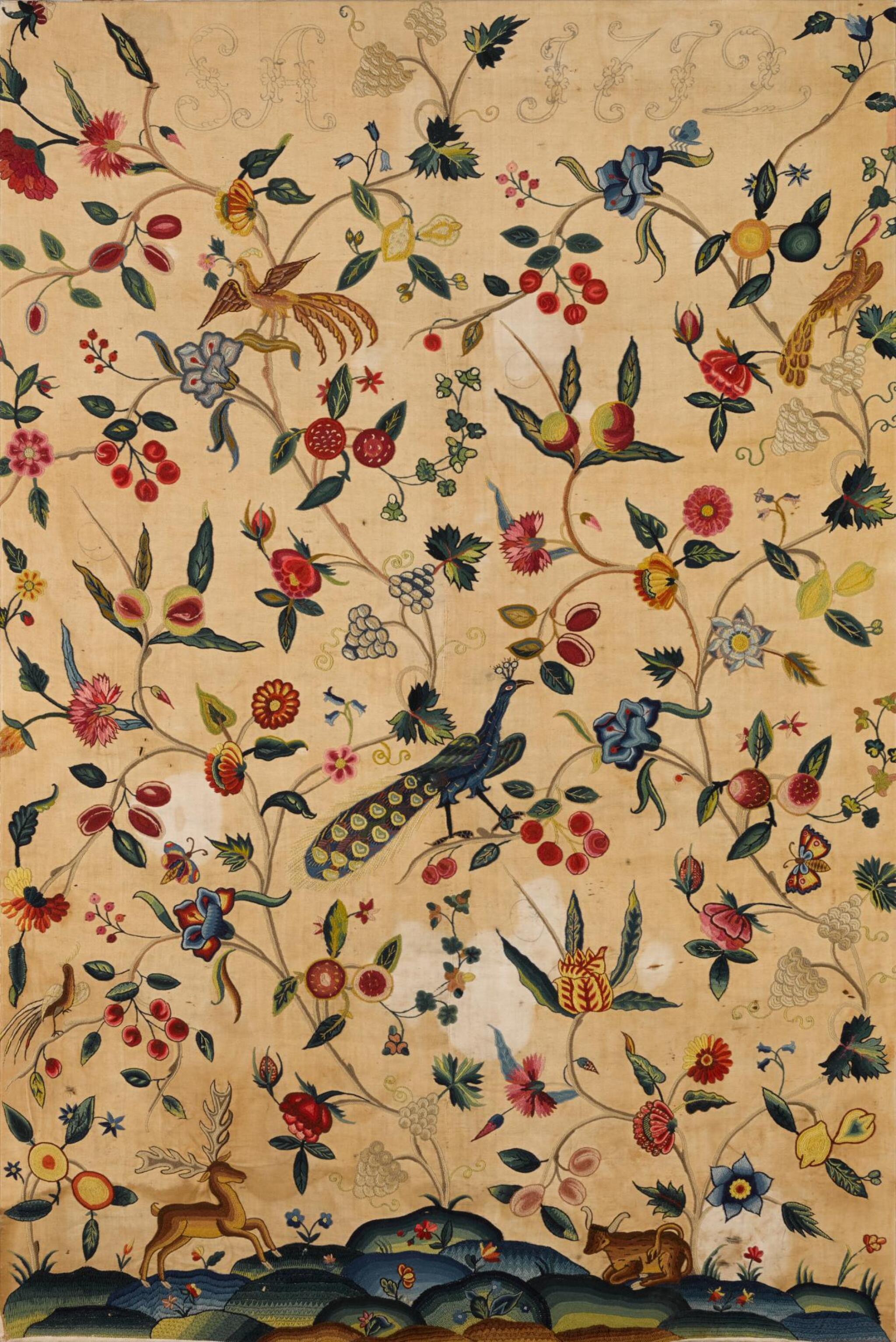 of vertical rectangular format, comprised of two joined lined panels, worked in polychrome silks on a linen ground, with scrolling branches with mixture of fruit and flowers, including lemons, grapes and cherries, and tulips, roses and carnations, a centrally placed peacock and a small bird in the top left and right corners, the branches issuing from a hillocky landscape with a stag and oxen; across the top edge there are the initials and date, SA, 1712, in pencil outline (lacking evidence of stitching), mounted on a linen backed stretcher

Embroidered across the vertical join of the two panels. There are areas of lighter discolouration to the ground in areas of both panels, visible as the white shaped circular areas, probably attempts at cleaning. There are additional small holes, evident by the dark surround of corrosion, for example across the central section on the panels, and some dark spots. There is also a hole is visible on close inspection in the tulip in lower right of the composition. There is some distortion to the tension (rucking) to the ground textiles in centre of left panel and the top right section of the right hand panel.

This panel is probably English, inspired by the Indian palampores and chintz designs, and then Chinese influences on textiles in the 18th century. Embroidered Gujarati textiles were identified as among the most lucrative goods for export, as soon as European trade with India picked up in the early 17th century. The Portuguese were the first Europeans to enter this market, but most surviving Gujarati embroideries relate to trade with England, which increased in the early seventeenth century. The Gujarati embroiderers adjusted motifs and colours for the pieces produced for the English market. The use of chain stitch was an Indian technique. The English and European embroideries were used as inspiration for the embroidered and chintz panels making it back to Europe from India, the European pieces having also been influenced from further afield. There were therefore a variety of motifs interpreted in and derived from European and Asian sources, and designs therefore included fantastical combinations of foliage and animals within the same compositions. For the present panel, based on the linen ground, use of wool and detailing of knots, it is probably English as opposed to being Indian, Gujarat, for the Western market.

For a wall hanging with similar motifs, including the butterflies, cherries and amongst the various flowers, tulips, made in Gujarat, India, for the European market, late 17th century, see Victoria and Albert Museum, London, (Acc.no. IS.152-1953). For a fragment from a bed cover or wall hanging, India, Gujarat, 17th century, embroidered and originally quilted, with similar compositional inspiration, see the Metropolitan Museum of Art, New York (Acc.no.68.61). In addition for two comparable panels from Gujarat, India, late 17th century, see the Fine Art Museum, Boston, for a wide panel of hand-painted, mordant and resist-dyed, with flowers, birds and stylised rocky landscape with various animals (Acc.no. 53.2201), and a similar embroidered silk interpretation of a similar design (Acc.no. 53.2202). All four of the cited Museum examples have a provenance of the Earls of Ashburnham, Ashburnham Place, Battle, Sussex, inherited in 1924 by Lady Catherine Ashburnham (b. 1890 - d. 1953), Ashburnham Place.

For comprehensive discussion of this fascinating textile genre, see Sarah Fee, Cloth that changed the world: The art and fashion of Indian Chintz, Yale University Press, 2019.