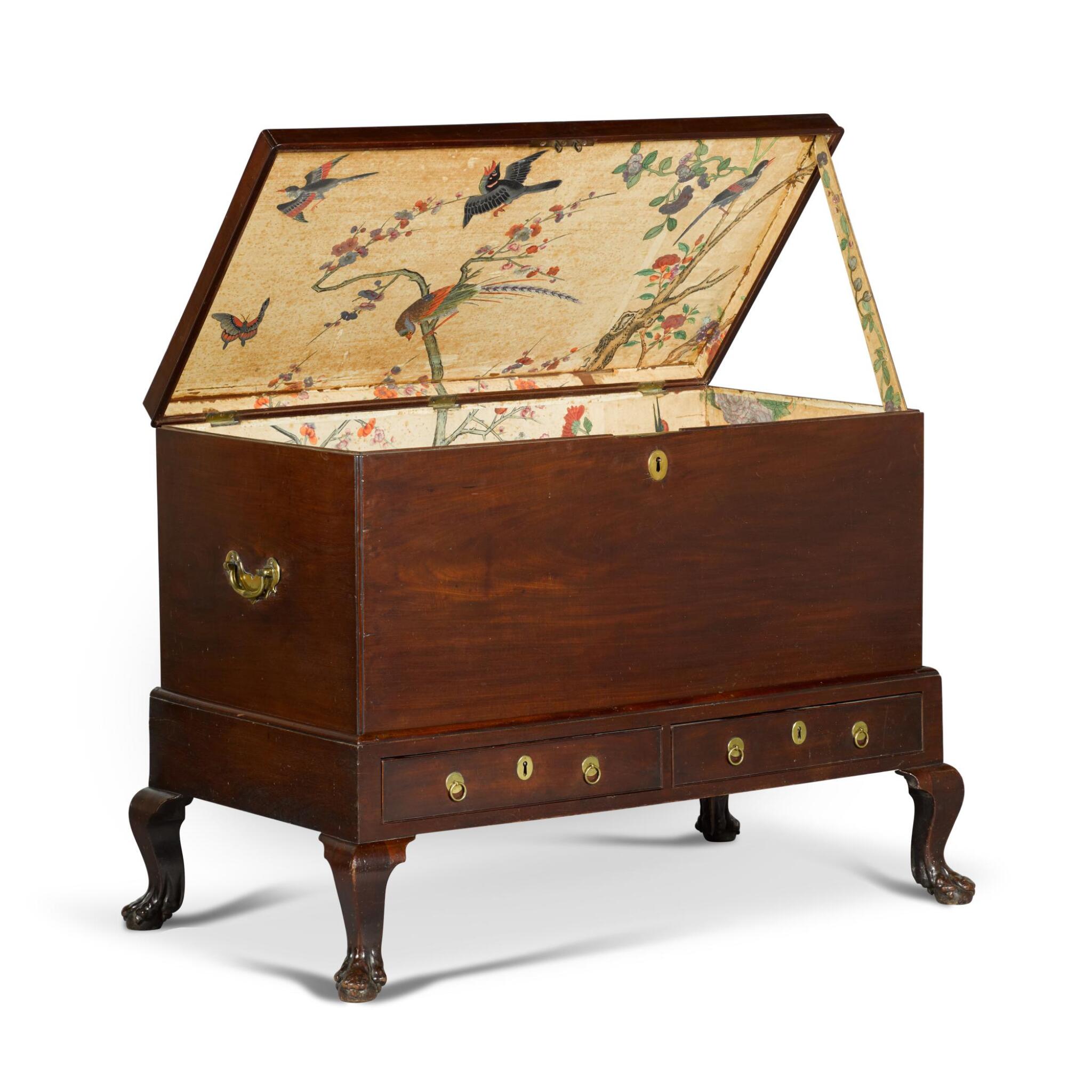 A lovely piece of Georgian case furniture in good, conserved condition. Surface with typical old marks, scuffs and scratches consistent with age and use including a notable watermark to top. Small filler and patch repairs around lock site only noticeable under torch light. The Chinese wallpaper lined interior is tired, with splits and foxing as to be expected but retains the vivid colouring and is of great charm. The metalwork apparently original. Some minor chips and losses to beading and moulding of chest and stand. Old repair to veneer at rear edge of right hand return of stand. The characterful paw feet similarly with typical scuffs and scratches.

Probably supplied to Sir James Dashwood, 2nd Bt. (1715–1779) for Northbrook, Oxfordshire and removed to Kirklington Park, Oxfordshire in circa 1750;
Acquired from Jonathan Fyson, 1989.
This wonderful chest-on-stand, retaining its original Chinese Export wallpaper lining to the interior, was probably supplied to Sir James Dashwood, 2nd Bt. (1715–1779) in the years after he succeeded his grandfather in 1734. Dashwood inherited several estates including his grandfather's house at Northbrook in addition to property from his mother, Dorothea Read, daughter of Sir James Read of Brocket Hall, Hertfordshire. Following an extensive Grand Tour through Italy, France and the Low Countries, Dashwood set about building a new house that properly reflected his wealth and status.

An archetypal gentleman architect, Dashwood was heavily involved in the build and interior decoration of Kirklington Park, and after consulting James Gibbs and Daniel Garrett in the early 1740s he eventually settled on plans by John Sanderson. The foundations were laid in 1742 and the house was habitable, albeit incomplete, by 1746. Northbrook was demolished shortly afterwards, in 1750, and it is likely the present chest was assimilated into the collections at Kirklington shortly thereafter. The interiors at Kirklington represent a rare capsule of neo-Palladian, Baroque and early Rocco design, conceived and executed in one decade, with virtuoso stucco work by Thomas Roberts and the famous painted ceiling of the Small Drawing Room by Andien de Clermont. Payments to William Hallett suggest he supplied much of the furniture at Kirklington, including a set of hooped back dining chairs and an early pair of commodes for the Library in circa 1745 (for one, see E. Lennox-Boyd, Ed., Masterpieces of English Furniture: The Gerstenfeld Collection, Italy, 1999).

Kirklington remained in the Dashwood family until 1909. As a result of several dispersals during the 20th century, the dining room scheme is now preserved in its entirety in the Metropolitan Museum, New York (Acc. No. 32.53.1).