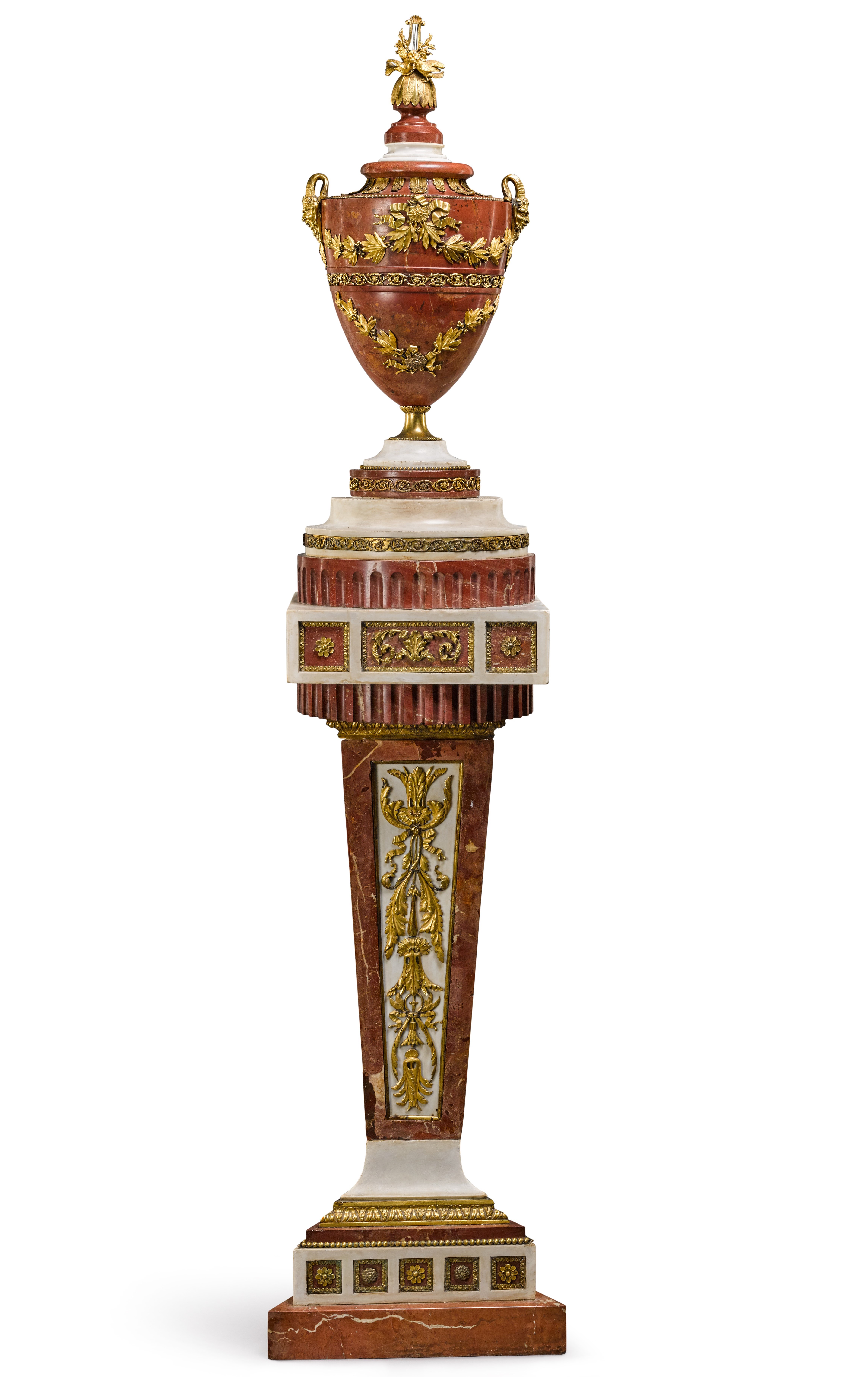 In overall good conserved condition. Generally with minor old marks, scuffs and scratches consistent with age and use. The mounts with minor tarnishing as should be visible in the catalogue images. One small loss to a scroll on the lowest round frieze on the left side, this is not too distracting. The marbles with minor scratches and scuffs, perhaps more visible on the white marble. Several replacements to the red marble of the pedestal, for example to the lower left.

This impressive and colourful vase and pedestal seem to illustrate the type of production emanating from the Royal Buen Retiro manufacture in Madrid in the late 18th century. When Carlos VII of Naples assumed the Spanish throne as Charles III in 1759, he transferred the Capodimonte porcelain factory to the Buen Retiro park in Madrid. Prior to his accession to the throne, he had resided in Naples as the King of the Two Sicilies, where he had gained an appreciation for the Italian art of pietre dure (hardstone inlay). On his arrival in Madrid, he thus also established the Real Laboratorio de Piedras y Mosaico at the Buen Retiro Palace. The manufacture was under the direction of Florentine Giovanni Battista Ferroni who brought into the workshops many fellow Florentine craftsmen including Domenico and Luigi Poggetti, and Francesco Sabatini and Domenico Stecchi, both of whom were active at the Opificio delle Pietre Dure, the Grand-ducal workshops in Florence. These Italian-born hardstone carvers trained a generation of Spanish artisans, and created some of the most superb pietre dure objects of the 18th century.

The workshop became highly successful. The most celebrated early works produced by the Laboratorio are the series of nine tables with extraordinary trompe-l'oeil devices and illusionistic scenes which were designed by Charles-Joseph Flipart (1721-1797) and completed by 1788. With the emergence of Neoclassicism as the dominant international style by the late 18th century, the laboratory’s productions were infused with the classical style as visible with the present. One of the most important pieces for this period is the surtout de table offered as a diplomatic gift by Carlos IV to Napoléon when they met in Bayonne in 1808. The magnificent table centerpiece with fine gilt-bronze mounts by Giovanni Battista Ferroni (d. 1804) pays homage to the grandeur of the Spanish monarchy and seems to recreate an ideal classical world as it gathers obelisks, temples, porticos, statues, busts, vases, and candelabra.

Now housed in the Château de Fontainebleau (inv. no. T264C), the design of the Charles IV surtout de table closely parallels the present vase and pedestal. Compare, in particular, the friezes of scrolls on several elements of the surtout (T264C.1/2/3) and how they are chased in an analogous way to scrolls on the present vase and pedestal. Compare the downward stylized foliage to one candelabra with a Vestal (T264C.4.2) in the surtout to the mounts on the neck of the present vase. Compare the leaves to the body of one candelabra and the petals of flowers in the surtout to the leaves mounted on the finial and the leaves of the wreaths of the present vase. A surtout de table from Buen Retiro illustrated in Galerie G. Sarti, Fastueux Objects en marbre et pierre dures, pp.136-139 also interestingly features similar scrolls of stylized foliage.