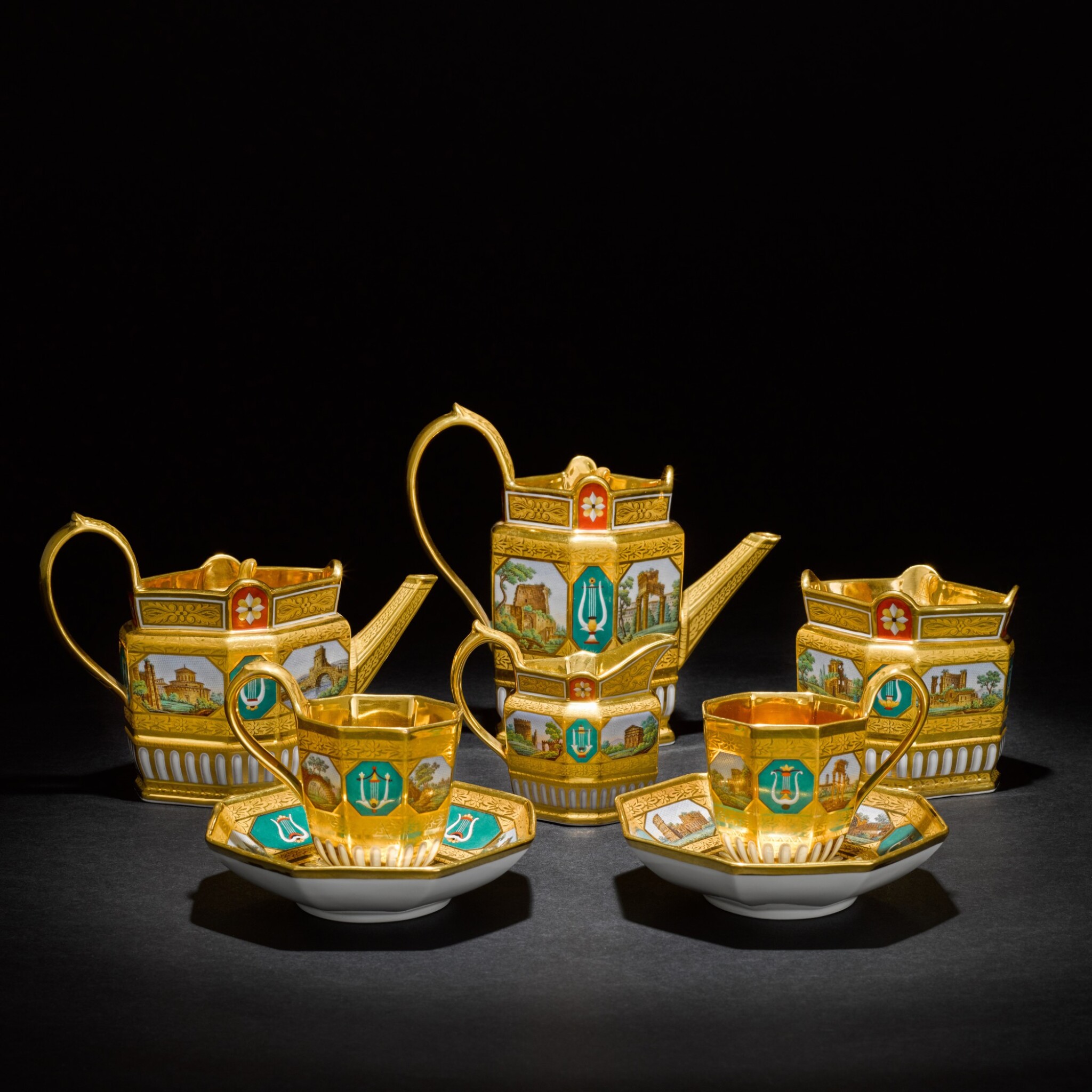 painted to simulate micromosaic, with Roman architectural views within octagonal cartouches divided by panels simulating pietra dura on a richly gilt ground tooled with bands of flowerheads and leaves, the lower part painted to simulate gadrooning, the finials formed as recumbent sphynxes, comprising:

-a coffee pot and cover,

-a teapot and cover,

-a sugar bowl and cover

A few light scattered scratches to the gilt ground but overall of good appearance and well decorated. -a coffee pot and cover,18.3cm high: the coffee pot has a minute pinhead-sised chip to the tip of the spout. -a teapot and cover: on the lid, there is a small chip to the edge of the sphynx's headdress. Otherwise in good order. -a milk jug: in good condition but with a small scratch on the surface of the gilding towards the upper part of the handle. -a sugar bowl and cover: in good condition. -two cups and saucers: there is a few light scuffs to the handle of one cup. And some slight wear to the well of the saucers. Similar wear to the well of the other saucer and some light surface scratches and patches to the interior.

This spectacular service is a tour-de-force in porcelain painting and is in the highest standard of production. 'En mosaique' decoration was held in such high regard that it attracted Royal favour. For example, an order from Friedrich Wilhelm III of Prussia was placed on 20th January 1818 for a six-part déjeuner, 'Gemalt mit Vögel en mosaique in erh{abenen} Gold eingef{aßten} Schildern auch Vaschen in florent{iner} mos{aik} in blauen Schildern nebst mehrerer reicher Vergoldung, innerh{alb} die Becher auch Saanekanne Glanzgoldfond.', ["decorated with birds en mosaique in raised gold framed shields, also vases in Florentine mosaic in blue shields as well as much rich gilding, inside the beakers and cream jug also brilliant gold ground," in Dr. Samuel Wittwer, Refinement and Elegance: Early Nineteenth-Century Royal Porcelain from the Twinight Collection, New York, 2007, p. 190.]

Interestingly, some of the simulated micromosaic scenes which appear on this service seem to be based on engravings in the two-volume work by the publishers J. Mérigot and R. Edwards, A select collection of views and ruins in Rome and its vicinity : recently executed from drawings made upon the spot. A publication was released in London in 1815 though the plates date to between 1796-1798. An example is still preserved today in the K.P.M archive.