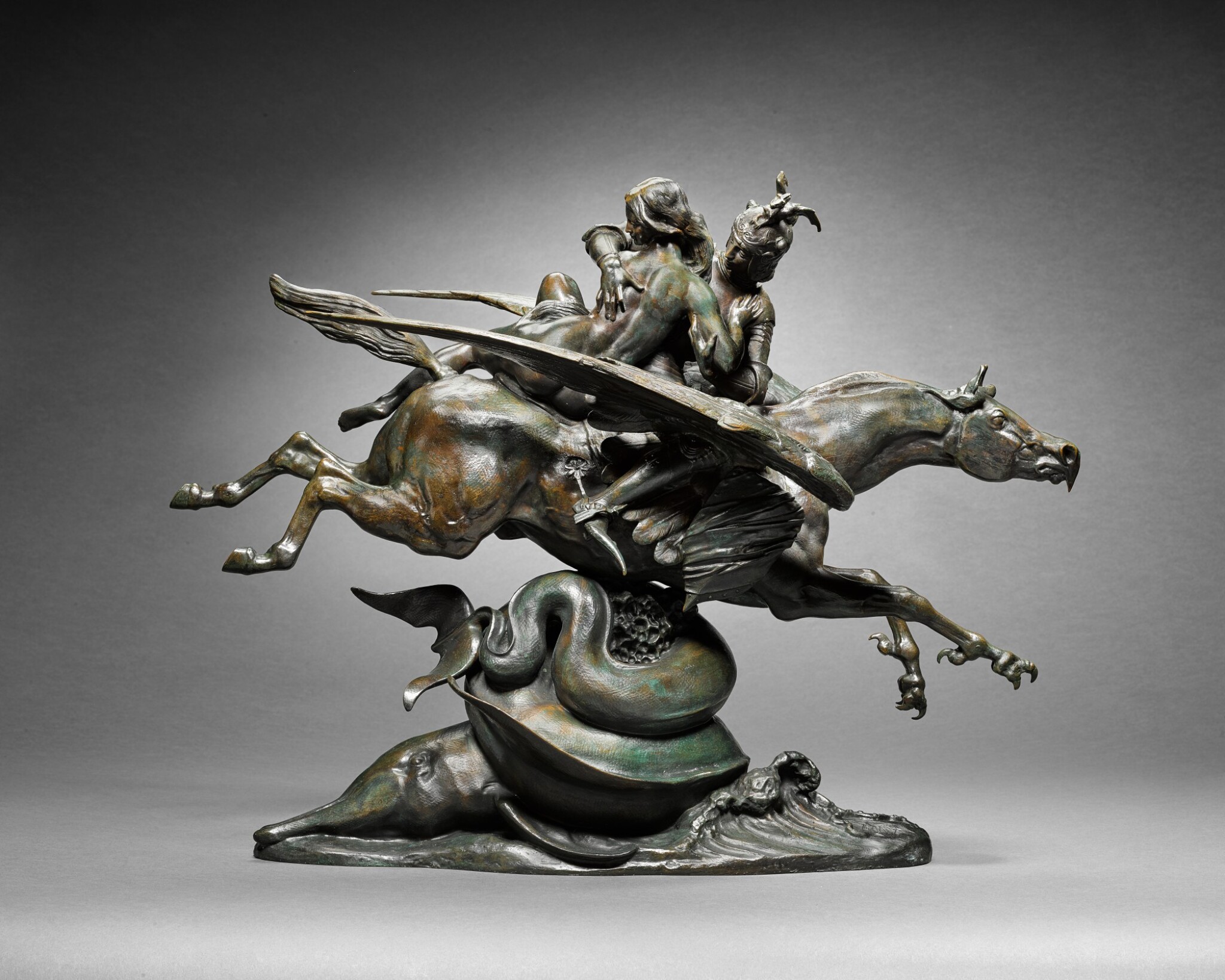 Overall the condition of the bronze is very good, with minor wear to the surface consistent with age. There is a greenish colouration to the patina throughout, and a few flecks of red. There are traces of wear to the patina, including to the hippogriff’s snout and to the dolphin's tail. There are some minor marks and possible abrasions to the surface, including at Angelique’s bottom. The tip of Roger’s sword is slightly bent.

Private Collection, Germany
Upon the beach the courser plants his feet,
And goaded by the rowel, towers in air,
And gallops with Rogero in mid seat
While on the croup beneath him sate
the fair;
Who of his banquet so the monster cheat;
For him too delicate and dainty fare.
Rogero turns and with thick kisses plies,
The lady’s snowy breast and sparkling
eyes.

Ariosto’s poem tells of how the beautiful Princess of Cathay, Angelica, was chained to a rock on the Isle of Tears and offered as a sacrifice to an insatiable sea monster, the Orc. Moments before she is to be devoured by the beast, Angelica is rescued by the gallant African paladin, Roger, who slays the predator and carries the young princess off on a hippogriff, a magical half horse, half hawk, creature. As Roger rescues Angelica, he falls hopelessly in love with her. It is this intimate moment that Barye, the great French Romantic sculptor, has captured in bronze. The nude Angelica, her nakedness revealing both her beauty and, conversely, her vulnerability, embraces her rescuer. As she looks back towards the scene of her near-death encounter, her protector gently secures her in place, whilst gazing down upon her slender exposed neck. Below, Barye, the animalier sculptor par excellence, has represented an enormous dolphin, whose writhing tail wraps around a coral wreath, as a monstrous octopus is washed up by the waves; two natural allusions to the unnatural sea creature from which Angelica has escaped.

Barye was commissioned to model Angélique et Roger by Prince Antoine, Duke of Montpensier (1824-1890). The Duke appears to have wanted a sculptural ensemble to rival that of the famous surtout de table created for his elder brother, the Duke of Orleans, the centerpiece of which was Barye’s La chasse au tigre. The Angélique et Roger formed the key component within a larger garniture de cheminée, incorporating a clock and flanked by a pair of classicising candelabra (see Poletti and Richarme, op. cit., no. F24). Significantly, the artist is believed to have been given almost free-reign in his choice of subject. The Montpensier commission is therefore a rare example of Barye, termed the ‘Michelangelo of the Menagerie’, deliberately opting for non-animalier subject matter; it should be seen as a mythical counterpart to the sculptor’s animal combat groups of the surtout de table.

The story of Roger and Angelica, which combined the concerns of the Renaissance revival and Romanticism, proved to be a favoured subject for 19th-century artists, and Barye appears to have drawn upon a number of sources for his group. Roger’s fantastical armour is reminiscent of that worn by the hero in Ingres’ Angelica saved by Ruggiero in the National Gallery, London (inv. no. NG3292), whilst the reclining figure of Angelica has echoes of the painter’s Odalisque, Musée du Louvre, Paris (inv. no. RF1158). Perhaps the closest source of inspiration for Barye was Louis-Édouard Rioult’s Roger déliverant Angélique, which was exhibited at the Salon of 1824, and depicts the pair in flight from the Isle of Tears, with Angelica turned away from Roger as he gazes at her.

The present bronze is a particularly fine cast, and betrays Barye’s characteristic virtuoso touch. Note, in particular, the superb play of textures: Angelique’s soft flesh presses against the cold metal of Roger’s armour, which sits against the Hippogriff’s feathers. Barye has embellished the model with lively details, such as the roaring chimera surmounting Roger’s helmet, flanked by Renaissance-style dolphins, which respectively reference the flying hippogriff and the giant sea creature below. These elements have been brought to life by a fine web of surface chasing and the beautifully variegated green-brown patina that distinguishes the present cast.

The Angélique et Roger was hailed by the critic Gustave Planche as ‘the most ingenious work in modern art’ for it combined ‘the genius of Ariosto, Italy’s first poet after Dante, with the intelligence of Barye’ (Johnston and Kelly, op. cit., p. 130). Casts are held in the collections of the Walters Art Museum, Baltimore (inv. no. WAM 27.173), the Musee du Louvre, Paris (inv. no. OA 5724); Los Angeles County Museum (inv. no. AC1992.72.1); Bonnat Museum, Bayonne; Corcoran Gallery of Art, Washington; and the Metropolitan Museum of Art, New York (inv. no. 10.133.1).