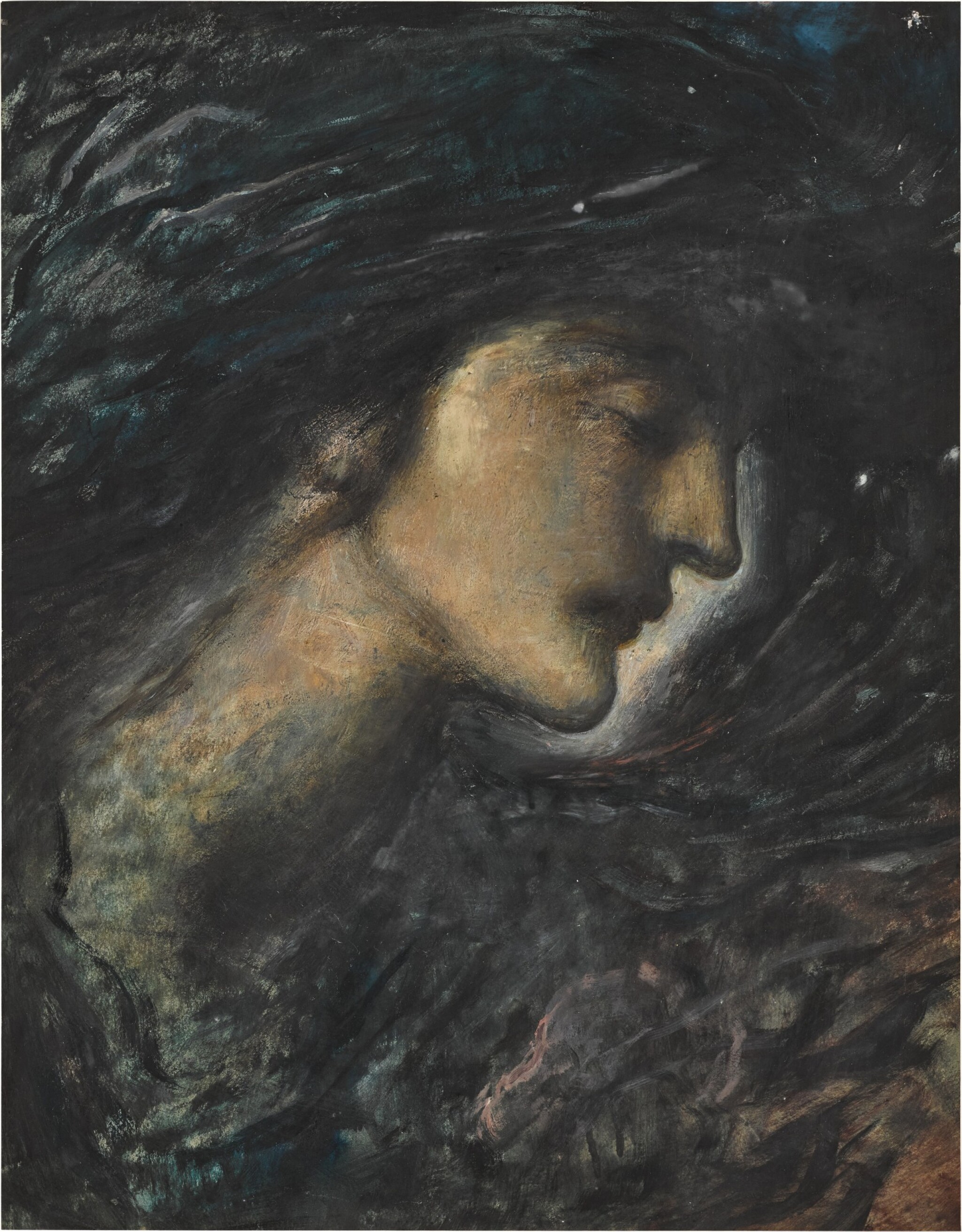 Under glass, has not been examined out of frame. Small horizontal crease to the left of the head, otherwise the work is in excellent condition, ready to hang.

Simeon Solomon was the younger brother of the artists Abraham and Rebecca who were known for their interesting but traditional Victorian genre paintings. Simeon developed a more visionary approach to art, developed from the paintings of Dante Gabriel Rossetti and Albert Moore and the poetry of Algernon Swinburne, all of whom he was closely associated with in the 1860s. He had studied at the Royal Academy Schools from 1855 and exhibited his first picture at the Academy The Mother of Moses in 1860. During this early period in his life, he was hailed as a genius and much praised for his bold illustrations of biblical scenes, some of which were made for Dalziel’s famous bible, and for his drawings of Jewish life and ritual. In 1871 everything changed when he was arrested for lewd conduct and shunned by his family and former friends. He was condemned to a life of squalor in the St Giles Workhouse in Holborn, making money by selling matches on the street. With his meagre earnings he bought artist’s materials and continued to draw (usually in coloured chalk) and his work developed a haunting Symbolist intensity. With a few loyal patrons and sympathetic friends, Solomon survived for over thirty years living this precarious life and producing some of the most remarkable drawings of the period. Throughout the 1880s and 1890s his pictures were popular among the undergraduate students of Oxford and the champion of the Aesthetes Oscar Wilde wrote to Lord Alfred Douglas from Reading Goal about his regret at the loss of his cherished drawings by Solomon. Following his death in 1905, accelerated by chronic alcoholism, his work was exhibited at the Baillie Gallery in London and at the Winter exhibition at the Royal Academy. In modern times he has again been judged to be one of the most important members of the Aesthetic movement and in a wider European context, an active exponent of Symbolism.

Night depicts an androgynous head representing the Greek goddess Nyx, one of the primordial beings that existed at the beginning of creation. She was the mother of Thanatos (Death), Erebus (Darkness) and Hypnos (Sleep) and so powerful that even Zeus feared her. Nyx and her son Hypnos were re-occurring figures in Solomon's art following his scandal and it is tragic to imagine that the gentle peace of night and sleep, with its dreams of beauty and atonement, may have been one of Solomon’s few comforts during these dark years of his life. It was certainly a theme which appears again and again in his work and in the Baillie Gallery exhibition there were several drawings and paintings of sleeping heads Night and Morning, Night and Her Child Sleep and The Winged and Poppied Sleep dated 1883. The pinnacle of Solomon’s preoccupation with the theme of sleep was his beautiful prose poem A Vision of Love Revealed in Sleep which begins 'Upon the waning of the night, at that time when the stars are pale, and when dreams wrap us about more closely, when a brighter radiance is shed upon our spirits, three sayings of the wise King came unto me. These are they: - I sleep, but my heart waketh; also, Many waters cannot quench love; and again, Until the day break, and the shadows flee away; and I fell musing and thinking much upon them.' (Simeon Solomon, A Vision of Love Revealed in Sleep, 1871, pg. B).