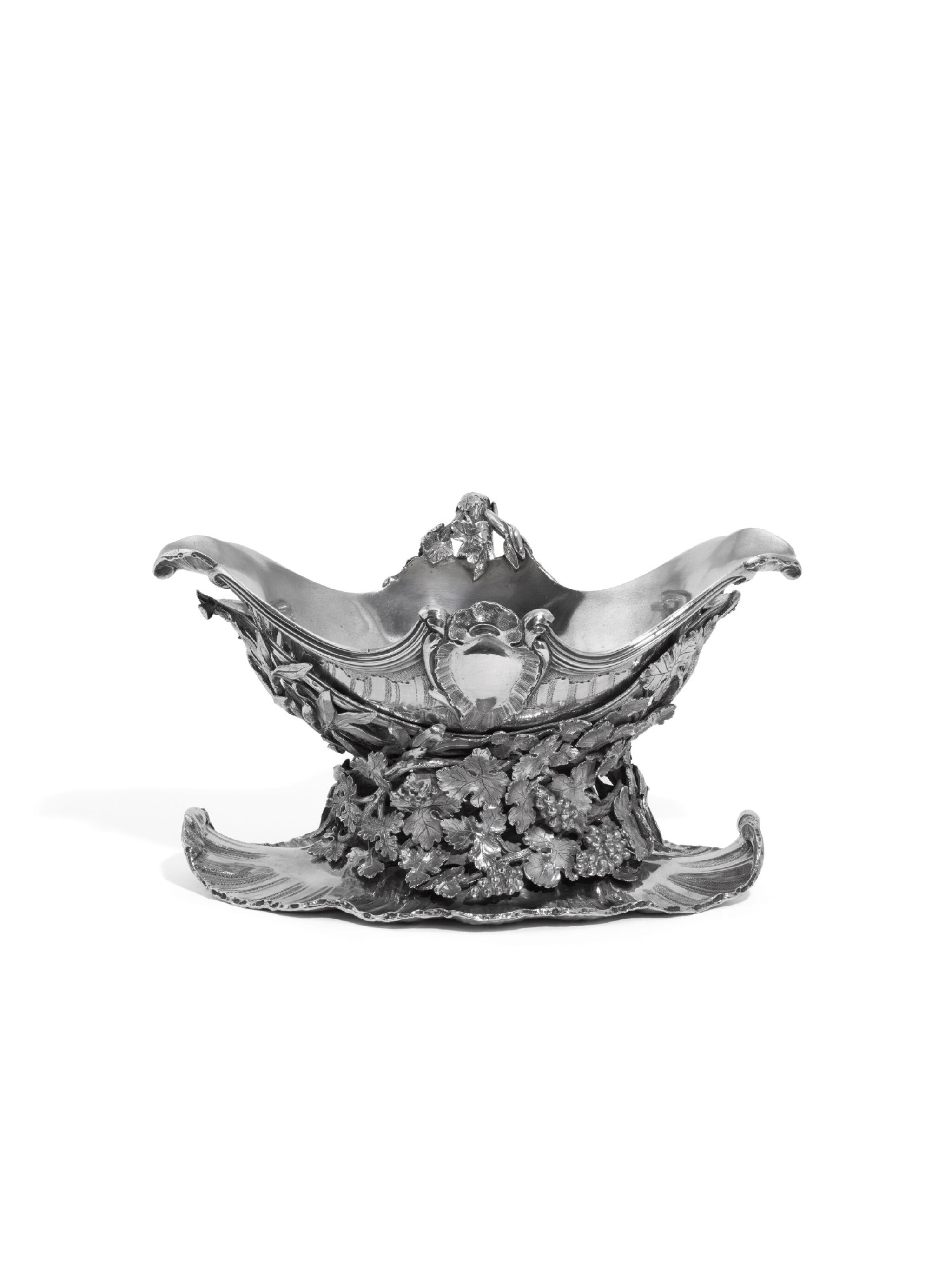 shaped over sauce holder chased and applied with rocaille ornament and shells, handle in the form of a vine stem overlaid with olive leaves and fruit, openwork mount similarly cast and chased with grape clusters, olives, and leafing tendrils rising from a rocky forest floor, on a shaped rocaille decorated base with upturned ends, marked on base, mount and sauce container, also with countermarks for 1768-1775 and 1775-1781

Sauceboat and stand with maker's marks JBC a key; warden's mark Y for 1762-63; Charge marks 1762-68 for large and smallwork; discharge marks 1762-68 a pointer's head; and additionally counter marks for 1768-75 a hunting horn and for 1775-81 a slipper; cagework sleeve with discharge and both counter marks as above; traces of coats of arms in cartouches, sleeve lacking one of the fixing pins, possible small loss to a vine leaf, overall light wear to the sauceboat, general condition excellent, crisp chasing to cagework leaves, marks good and clear.

Most probably the Dukes of Buckingham and Chandos;

Acquired by the present owner from a member of the Pinto Basto family, Casa das Gaeiras, óbidos.

The pair to this sauceboat, with the same slipper and hunting horn counter marks, is in the J Paul Getty Museum, California, inventory number 71.DG.76.

At the purchase of that sauceboat by the Getty Museum, from the David David-Weill collection in Paris in 1971, the provenance was recorded as the Duke of Buckingham in 1903.

The Dukedom of Buckingham (4th creation) had ceased to exist following the death without male heirs of the 3rd Duke in 1879, suggesting the owner when it was sold in 1903, was the estate of his nephew and heir William Stephen Temple-Gore-Langton, 4th Earl Temple of Stowe who had died the year before in 1902.

The sauceboats were not included in the sale in 1848 of the bankrupt 2nd Duke of Buckingham and Chandos whose obituary in The Times (London, 31 July 1861, p. 12b) includes the following:

‘The family had wealth corresponding to its renown, and, above all, such a treasure-house in its mansion at Stowe as could only have been created by long generations of men exalted in station, abounding in luxury, and accustomed to all the refinements of life. All vanished under the hammer. All the priceless heirlooms of an illustrious family were scattered over the world, to be sold in shops, and to glitter, some in the halls of hotels, other in the drawing-rooms of self-made men'

Such ‘men of exalted station’ as the Times described included the Ist Duke’s grandfather Lord Grenville (1712-1770) who became prime minster of Great Britain in the year the sauceboats were made.

The sauceboat, unusually removable from its frame and with one handle only, sits in an asymmetric cage of vines and olive branches. This is like the sauceboat of 1754-55 by Francois Joubert, made for Madame de Pompadour (Helft p. 165) one of the few surviving pieces of silver that can be confidently ascribed to her ownership, which is caged in vines with olives and grapes flanking the coat of arms. This unusual combination of grape and olives on a sauceboat might suggest it was used for a vinaigrette or a mixed sauce for salad in opposition to the more common serving of oil and vinegar which came in separate glass containers at the time. The word vinaigrette meant different things at different times, being once a meat-based sauce, only becoming associated with salad towards the end of the 17th century. John Evelyn in Acetaria A Discourse of Sallets published in 1699 appears to use the word to describe a collation of ingredients in a salad

'Cucumber……tho' very cold and moiſt, the moſt approved Sallet alone, or in Compoſition, of all the Vinaigrets, to ſharpen the Appetite, and cool the Liver,…’Jean-Baptiste-François Cheret (1729 to after 1789) was one of the great Parisian goldsmiths of the 18th century. In Les Grands Orfevres, Jacques Helft records his artistry; he was a gold box maker, worked in combined materials, a designer and inventive. In the ewer illustrated by Helft, Narcissus sees his reflection in the opening hinged cover as if he was looking into a pond; in the ewer and basin of 1770, by tradition a gift from Louis XV to his now married mistress Marguerite Catherine Hainault, Venus crowns Cupid with a wreath in a similar manner on opening the cover; a formal reference to the love of the married couple but readable as the love of the king for the mother of two of his children.

The Pinto Basto family came into prominence in Portugal through the energetic entrepreneur José Ferreira Pinto Basto (1774-1839) who established the Fábrica da Vista Alegre, the major manufacturer of fine porcelain and glass in Portugal, in 1824. Several members of the family were collectors and married into the country’s nobility. The Casa das Gaeiras is a beautiful manor house near óbidos, which came into the family through marriage circa 1900.