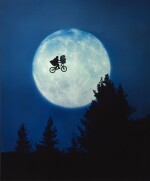 This transparency features artwork from the bicycle style American poster without credits. These transparencies, which are very high quality, were specially produced by the studio to send to media outlets, including newspapers and magazines, that required high quality colour images, as opposed to the usual black and white photographs.

The bespoke LED light box that has been made for this piece is suitable for UK and US electrical supplies, and has a separate lead for each country.

Exceptionally rare as not many were produced and they seldom surface.

Steven Spielberg's E.T. has won the hearts of so many people since its release in 1982. At the time it was the highest grossing film, surpassing Star Wars (1977).