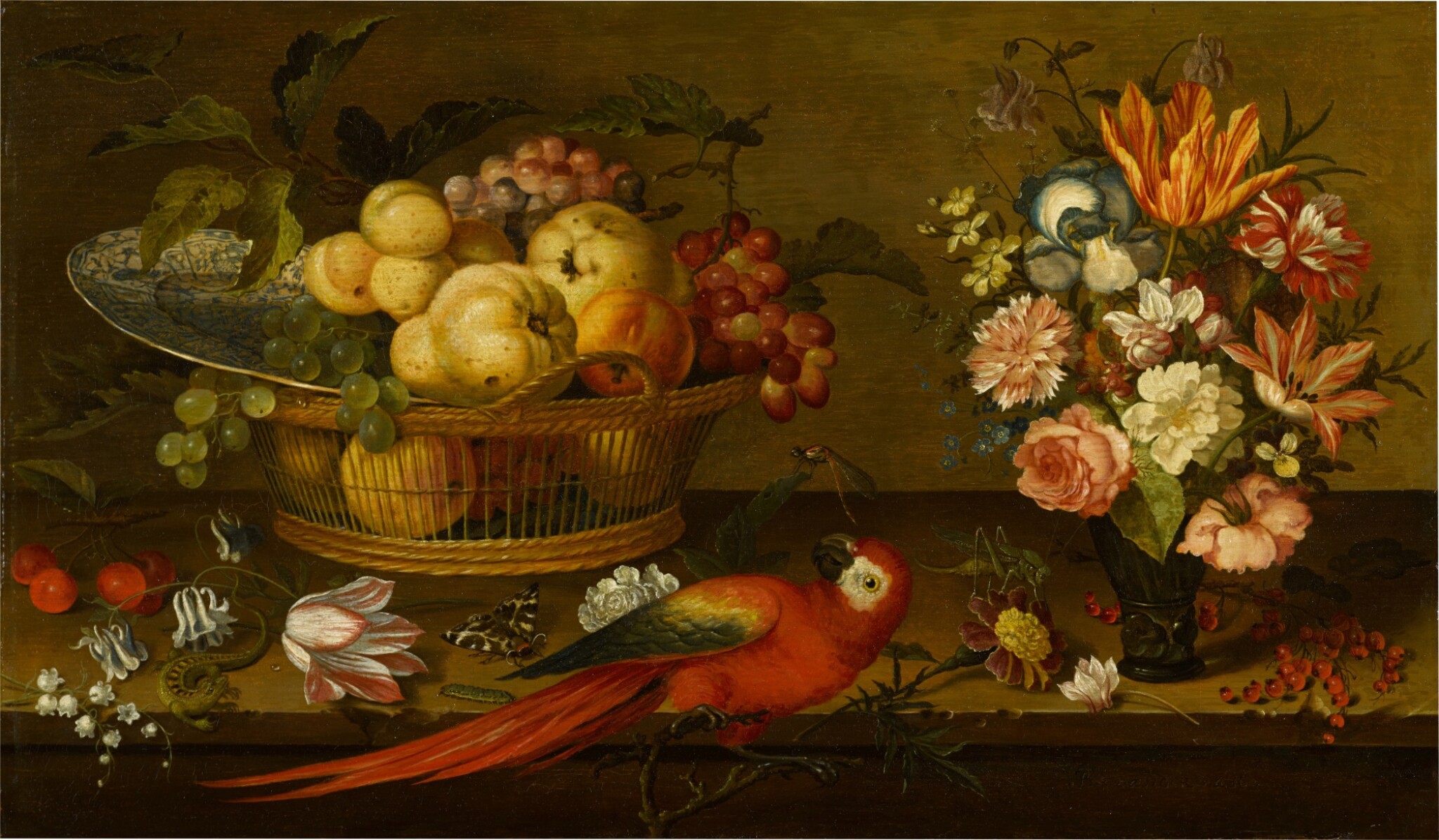 oil on oak panel, possibly reduced along the upper margin

The oak panel is of one piece and is well preserved. The wood grain runs horizontally and is slightly raised. The paint layer is stable and secure and many areas of the composition are in a good preserved original condition. The varnish is discoloured and has become opaque in some areas. Beneath can be detected old historic restoration that is excessive and discoloured. It has been applied to mitigate natural thinness of the paint layer, through the background, and to reduce raised wood grain. Natural thinness through the ledge has also been augmented. The textured brushwork through the fruit and flowers is in a good preserved condition, however some highlights have been augmented, the green grapes to the left, the pears and the white petals of the flowers. Other areas have been strengthened, including some of the darker passages, some of this restoration also appears excessive. Removal of the varnish would enhance the chromatic integrity of the image and reveal subtleties and fine details within the composition. Minor pin prick paint loss, visible to the body of the parrot and to the cherries, but also detected elsewhere across the composition, has been reduced. The signature is well preserved; strengthening around it to reduce thinness of the paint layer has been carried.

With an English art dealer, 1956 (according to Bol, see Literature);

San Diego, The San Diego Museum of Art, Brueghel to Canaletto, European Masterpieces from the Grasset Collection, 2 April – 2 August 2016, no. 9;

Saint Petersburg, Florida, Museum of Fine Arts, A Feast for the Eyes, European Masterpieces from the Grasset Collection, 23 March – 2 September 2019, no. 4.

This extraordinary still life is a signed work by one of the pioneers of the genre in the Netherlands, Balthasar van der Ast. It contains a multitude of the different objects associated with this strand of painting, including flowers, fruits, lizards, insects and birds, complemented by an imported Chinese Wanli dish. Dating to the 1620s, the rectangular panel is a celebration of the beauty, colours and textures of the natural, as well as the man-made, world.

Born in Middelburg between 1593 and 1594, Van der Ast's began his career as a painter after he entered the household of his brother-in-law the painter, Ambrosius Bosschaert the Elder (1573–1621). He became a master in the Guild of St Luke in Utrecht in 1619, the then home of the Bosschaerts, and remained there until leaving for Delft in 1632 where he remained until his death. In comparison to Bosschaert the Elder's foundational yet sometimes repetitive floral arrangements, Van der Ast's more dynamic and diverse performances captured the growing fascination for exotic rarities and objects in seventeenth-century Holland. This painting, which is amply filled with a vast array of nature's bounty, exemplifies the artist's talents in capitalising on this trend.

The warm tonality and bright colours of this panel have warranted a dating to the 1620s (according to the RKD), when the artist was working at the height of his powers in Utrecht.1 The finely painted flower bouquet in a glass roemer include examples of tulips, columbines, iris, carnations and roses. The reds, oranges and pinks of these flowers resonate particularly with the warm palette characteristic of this period of the artist's œuvre. Also visible on the table are lily of the valley, French marigold, cyclamen and red currants. The flowers are in contrast to the basket on the left containing pears, plums, peaches, cherries and grapes, amongst which a rare imported Wanli blue and white dish is nestled.

The detailed lively lizard, caterpillar, butterfly, dragonfly, grasshopper and splendid perching parrot are evidence perhaps of Van der Ast's relationship with Roelant Savery (1576–1639). Savery, whose fame increased as a painter of landscapes, animals and still lifes at the Imperial Court in Prague, had returned to Utrecht in 1618. The inclusion of minutely painted reptiles and insects are a consistent and recurring feature of his own floral works. Surviving legal documents attest to the connection between Van der Ast with both Roelant and his nephew Hans II Savery (c. 1589–1654).2

The scarlet macaw, in this position with its beak opened, appears in several works by the artist dating to the 1620s. The most notable example, coupled with a yellow parrot, is preserved in the Fitzwilliam Museum, Cambridge, which is signed and dated 1622.3 Another example is found in the National Gallery of Denmark, Copenhagen, dated 1623.4