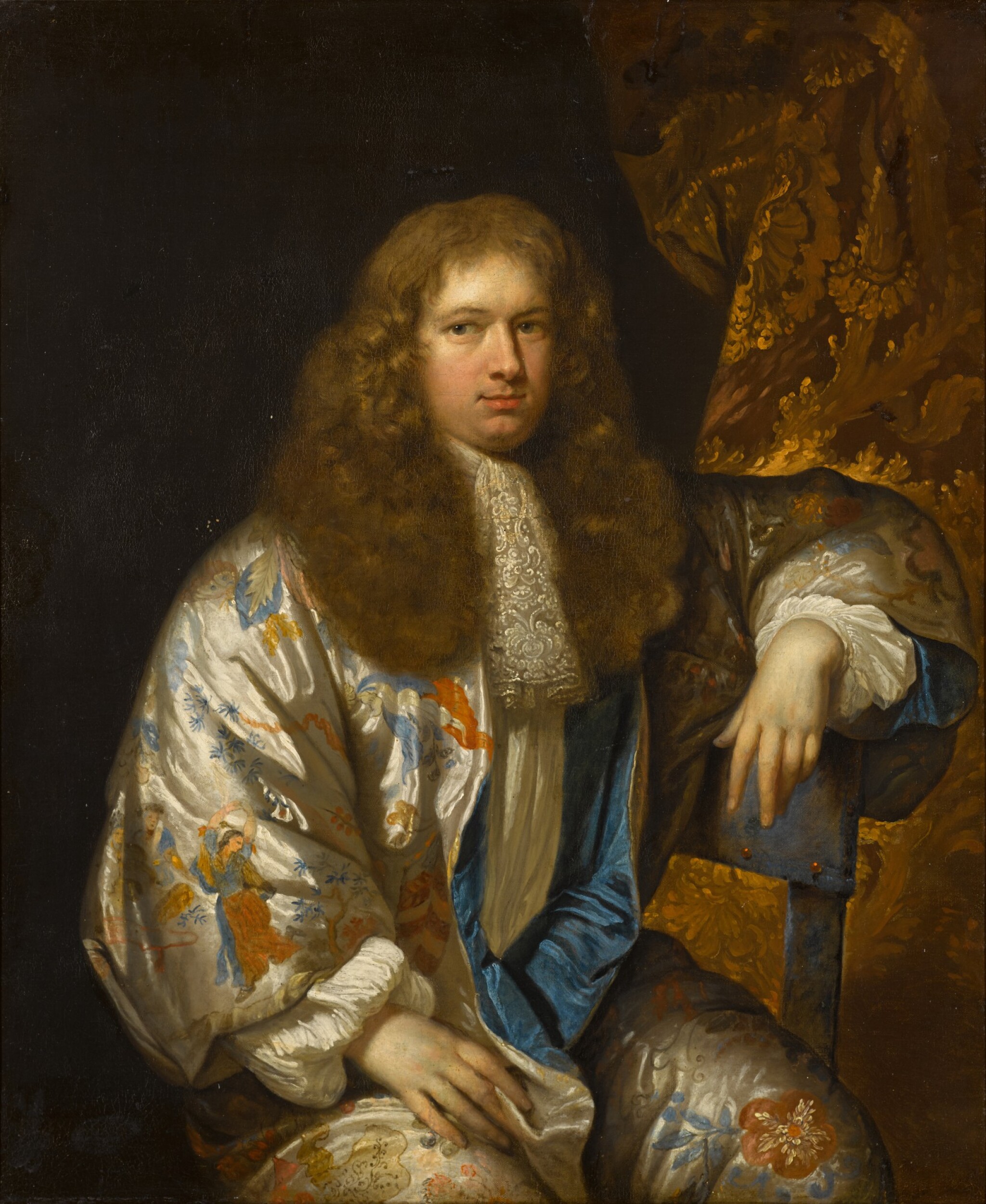 The canvas has an old lining, and also appears to be strip-lined. The paint surface is slightly dirty and the varnish is slightly discoloured and uneven. A handful of very small retouchings are visible: in the dark background, upper left and above the sitter's head, in a few spots in the curtain, upper right, and in a pinprick spot in the sitter's hair. There is also a more defined horizontal line of craquelure across the sitter's lace cravat. Inspection under ultraviolet reveals the rather uneven varnish, which does, however, fluoresce so opaquely as to render the aforementioned retouchings almost invisible. The painting will respond well to cleaning, and is in overall good condition.

Steven Wolters was a merchant, director and secretary of the Levantse Handel (Levant Trading Company) between 1690–95, and noted art collector – the auction of his estate lasted for 3 days between 20–23 November 1758, with a total of 1,573 objects, including over 1,000 prints, offered for sale. The son of Jan and Sara de Geer, in 1685 Wolters married Aletta Maria Trip (1654–1711), with whom he had a daughter, Adriana Louisa Wolters; they lived on the Herengracht, Amsterdam. It is recorded that Wolters sailed to the West Indies in 1695; his place and date of death are unknown, but his wife remarried in 1704.

Two other portraits of the sitter exist: one by Jan de Baen, signed and dated 1687, in the Van de Poll-Wolters-Quina Stichting, Zeist; the other a now lost portrait by Godfrey Kneller, known through a print by Jan Verkolje I of 1684, with an inscription reading ‘Amator Artium’.1 The present portrait is one of a series of seven of the Wolters family, also all in the Van de Poll-Wolters-Quina Stichting, which are partly or totally the work of studio assistants, since they were probably commissioned in 1683 (the date of this portrait), shortly before Netscher's death in January 1684.2 One of the series is an old copy of the present work, which was exhibited in the Stadsmuseum in Woerden in 1997–98, and additional versions of the other portraits suggest that copies were probably made for further members of the Wolters and Tummers families.3

This portrait exemplifies Netscher's interest in the rendering of textiles - here the sitter wears a robe probably made from Safavid (sixteenth- or seventeenth-century Iranian) fabric, which compares closely to the luxurious silk, decorated with figural and floral motifs, draped around the Fortune Teller in a painting today in The Leiden Collection.4 Such garments from China, Japan and Persia were among the most prized commodities brought back to The Netherlands by the Dutch East India Company – indeed the V.O.C. (Vereenigde Oostindische Compagnie) even set up a factory specifically to manufacture Persian silks for the Dutch trade – and Japansche rocken (Japanese robes) were particularly fashionable among the mercantile and artistic elite in the last decades of the 17th century, when this portrait was painted. The air of wealth, sophistication and exoticism that these sorts of rare and beautiful textiles lent to sitters is attested to by a number of portraits in which they have chosen to be depicted wearing them,5 and while it is likely that Netscher owned some of this material himself, Wolters' own links with the Levant may also account for his dress.

One might presume that the portrait stayed in the possession of the family of the sitter, but no information has yet come to light to indicate when it was sold.

This painting was among the collection put together by Dr Joan Hendrik Smidt van Gelder, the son of the paper manufacturer Pieter Smidt van Gelder (1851–1934), whose father had founded the paper manufacturer Koninklijke Papierfabrieken Van Gelder Zonen (Van Gelder Sons Royal Paper Mills Company) on the banks of the North Sea Canal in Velsen, northern Holland, in the late 18th century. He broke with family tradition by choosing to go to university, rather than joining the company, and studied medicine at the University of Leiden from 1905 to 1918, specialising as a pediatrician. In 1913 he married Margaretha Eva Uyt den Bogaard, with whom he had six children, and lived in Arnhem, where he worked in the Kinderziekenhuis (Children’s Hospital), later becoming the hospital's director and chief doctor in 1932.

Dr Smidt van Gelder's love of art was fostered by his family, and his passion for collecting – even when on a tight student budget – meant that by the outbreak of the Second World War, he had assembled a significant collection of more than twenty-five Old Master paintings, principally of the Dutch School, including works by Willem Kalf, Jacob de Wit, Salomon van Ruysdael, Jan van Huysum and Jacob Ochtervelt – The Oyster Meal, which, following its restitution from The Harold Samuel Collection in the Guildhall, London, was sold in these Rooms, 4 July 2018, lot 48, for £1,930,000. At least fourteen of these paintings were purchased from the Katz brothers – dealers in Dieren who became family friends – although it is not known whether the present work was among these.

Following the German invasion of Holland in 1940, Dr Smidt van Gelder’s collection was quickly identified as of key interest to the Nazis by Dr Eduard Plietzsch, a German art historian and specialist on Dutch art working for the Dienststelle Mühlmann, the agency for Nazi art looting in the Netherlands. Concerned for the safety of his paintings, Dr Smidt van Gelder had placed fourteen of them in a vault in the Amsterdam Bank in Arnhem by 5 November 1943 – including this painting.

The German Sicherheitsdienst (Security Service) attempted to arrest Dr Smidt van Gelder on 6 April 1943, as one of a group of physicians opposed to the Nazis. His absence from the family home saved him, but he remained in hiding and a fugitive until the end of the war, and the house was confiscated. After the Allies failed to secure the bridge over the Lower Rhine at Arnhem in September 1944, the German army ordered the residents of Arnhem to evacuate before they plundered the city – between 17 January and 8 February 1945, the vaults of the Amsterdam Bank were broken open by Helmut Temmler, leader of the Gaukommando Düsseldorf (District Command Düsseldorf), and he and his men stole over sixty paintings, including the fourteen stored there by Dr Smidt van Gelder. Despite major efforts by the Dutch government to find them after the war, he never saw his paintings again before his death in 1969.

His daughter, Charlotte Bischoff van Heemskerck, has a clear recollection of her father's collection of pictures from her teenage years before the Second World War, when they were all displayed in the family home in Arnhem. The Netscher hung behind her chair in the dining room.

5 See, for example, the Portrait of Johannes Hudde, burgomaster of Amsterdam, 1686, by Michiel van Musscher, today in the Rijksmuseum, Amsterdam: https://www.rijksmuseum.nl/en/collection/SK-C-528