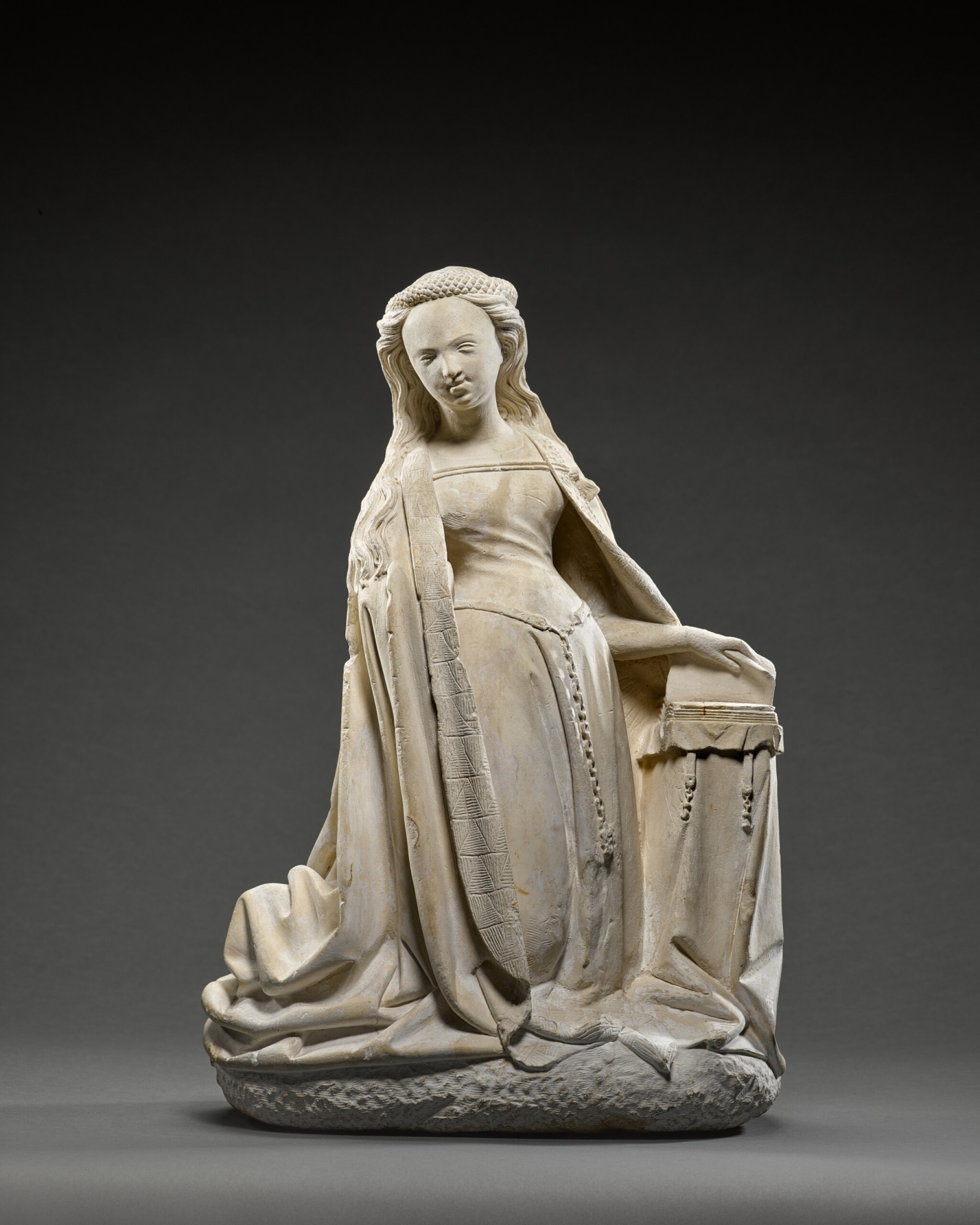 The nose, eyes, forehead, and front part of the Virgin's circlet have been restored at some point in its history, probably as the result of an iconoclastic attack on the figure's face. The proper left forearm and lifted pages of the book are also restored. The proper right hand and forearm are lost. There are some minor abrasions and chips, including to the edges of the drapery. There is a larger chip and insert or reattachment to the drapery at the back on the proper right side. Otherwise the condition is good, with minor surface dirt and wear consistent with age.

Please note that this lot should have a W symbol in the catalogue. This will be sent to Greenford Park immediately after the sale.
This graceful sculpture portrays the Virgin in full length, kneeling before a prie-dieu on which an open book lies; her fine hand seemingly turning a page in the book. The Virgin’s torso subtly turns to the left in an elegant twist. Her full-length dress follows the contours of her upper body and ends in voluminous folds extending over her legs. She wears a fine girdle just above her hips, which hangs towards the ground. A sophisticated fur-lined mantle is draped over her shoulders, held in place with a double-stranded cord across her chest.

The figure was originally part of an Annunciation group that included the Angel Gabriel, illustrating the scene from the Gospel of Luke (1:26-38) in which the Angel disturbs the youthful Virgin from her reading to deliver the message that she bears the son of God.

The striking contrast of the Virgin's figure-hugging dress and the weighty folds of her mantle demonstrates noteworthy skill. The overall treatment of the stone, the Virgin’s garments, and the studded circlet around her head indicate a dating in the third quarter of the fifteenth century. Later restorations to parts of the figure attest that it was probably a victim of iconoclasm.

A larger version of the same composition, carved in north-central France circa 1480, is in the Godwin-Ternbach Museum, Flushing (Holladay and Ward, op. cit., pp. 79-80). Another comparable figure, thought to have been made in Normandy around 1490, is in the Musée de Cluny, Paris (inv. no. Cl. 23796).