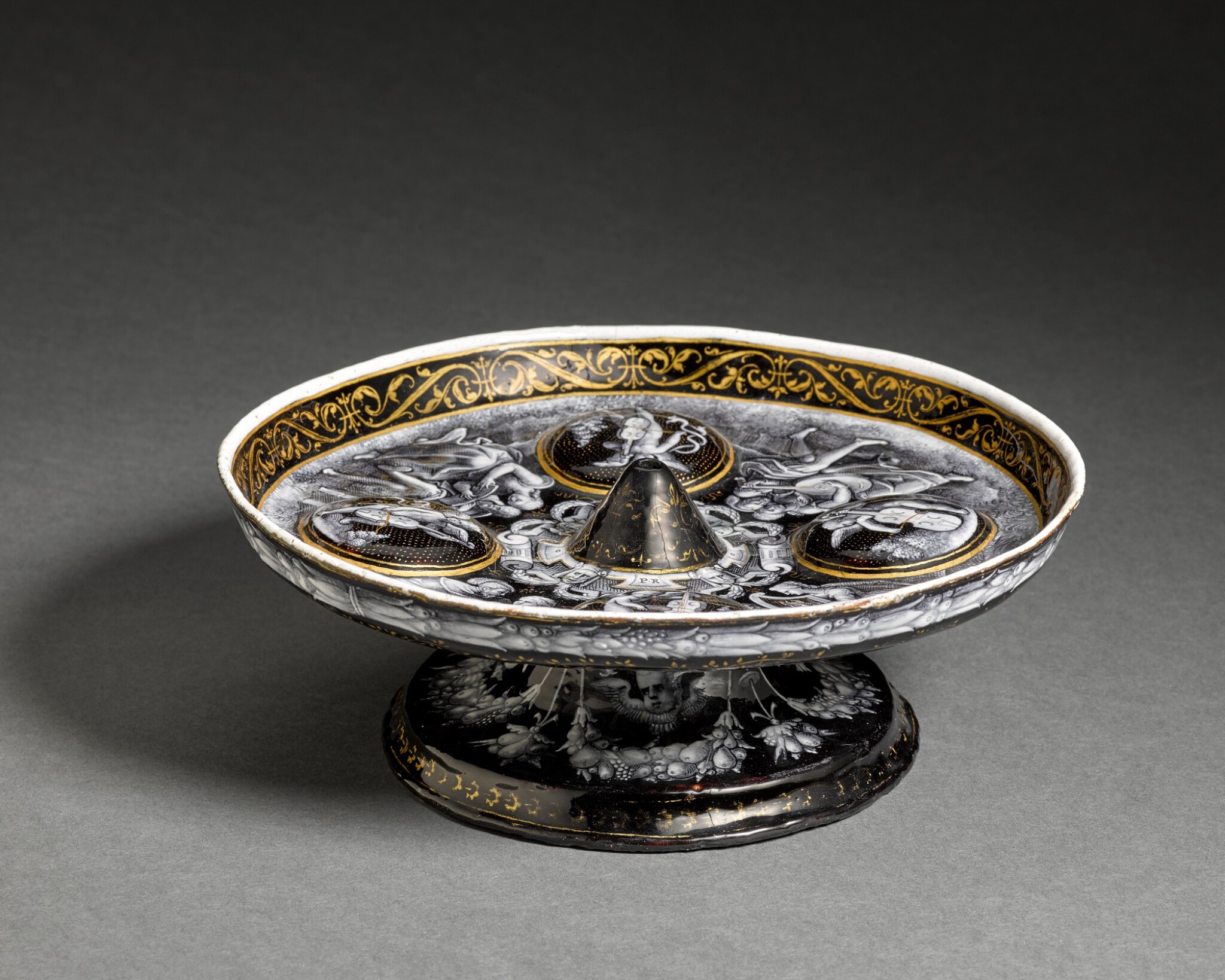 inscribed: PR to the bowl and the foot

incised: af and: 15 to the underside of the foot

Overall the condition is very good with minor surface dirt and wear consistent with age. There is wear with some very minor losses to the enamel in areas, in particular along the upper rim. There is wear to the gilding, notably at the central 'cone' and around the bottom of the foot. There is a small area of yellowish fill to one of the masks around the 'cone'. There are very minor yellowish residues to the exterior of the bowl, including to the medallion with Hercules and the lion and the medallion with a standing warrior. There is ghosting to the gilding on the underside of the foot, and there are some white residues here.

The present tazza is a beautiful example of the painted grisaille enamel objects produced by Pierre Reymond in Limoges from the 1540s. Reymond’s plates and vessels became highly fashionable from the mid-16th century onwards and helped to establish his reputation as one of the foremost Limoges enamellers.

Though its shape is that of a typical low-footed tazza, the precise form of the present vessel, with its pierced pyramid at the centre of the bowl, is unusual. Stylistically however it fits well within Reymond’s oeuvre. Raised medallions are found on a number of Reymond’s works, including two lids from covered cups in the Musée du Louvre (inv. nos. OA 974 and MR 4960). The classicising busts on the bowl’s exterior are near-identical to those seen on several salt cellars from Reymond’s workshop, such as a pair in the Louvre (inv. no. R 265), which also shows comparable cherub heads and lion masks. The putti and couples playing instruments painted on the bowl’s interior are rarer motifs, although similar music-making putti appear in a tazza in the Herzog Anton Ulrich-Museum, Braunschweig (inv. no. Lim 56) by Pierre Courteys, who is thought to have trained in Reymond’s workshop. The figures adorning the present tazza have been painted with exceptional skill, showcasing the enameller’s mastery of his craft.

Incised with the AF monogram, the present tazza hails from the magnificent Fountaine Collection of maiolica and Limoges enamels at Narford Hall. The collection was formed by the antiquarian and Grand Tour traveller Sir Andrew Fountaine (1676-1753) and added to by his descendants, Andrew Fountaine III (1770-1835) and Andrew Fountaine IV (1808–1874). Its sale in June 1884 caused a sensation on the art market and resulted in the dispersal of numerous pieces across important public and private collections. The present cup is identifiable as lot 142 or lot 143 in the 1884 sale catalogue. Since lot 142 is described as ‘tinted grisaille’, with a ‘white foot’, the present piece is more likely to represent lot 143, ‘its companion’. When Andrew Fountaine IV inherited the collection from his father in 1835, he drew up an inventory which lists two cups with 'Cupids on a raised ground', of which one is presumably the present tazza. It is therefore likely that the tazza was acquired by Sir Andrew Fountaine rather than his successors. According to the 19th-century Fountaine 'Family Book', the Narford collection of Limoges enamels was formed by Sir Andrew Fountaine in about 1720, when he is 'reported to have purchased many of the fine things which Cosimo the III, grand duke of Tuscany sold. This may account for so many of the fine pieces being marked with the Royal Mark of fleur-de-lis. They were probably presents sent by Catherine de Medici from France to her relations at Florence.' (as quoted in Moore, op. cit., p. 439). While there is no firm evidence for this assertion, Moore notes that the 105 enamels listed in the 1835 inventory were acquired before Andrew Fountaine IV became more active as a collector himself. A partially faded gilt fleur-de-lis appears on the underside of the present tazza’s foot.

We are grateful to Suzanne Higgott FSA and Dr Andrew Moore FSA for their kind assistance regarding the Fountaine provenance.