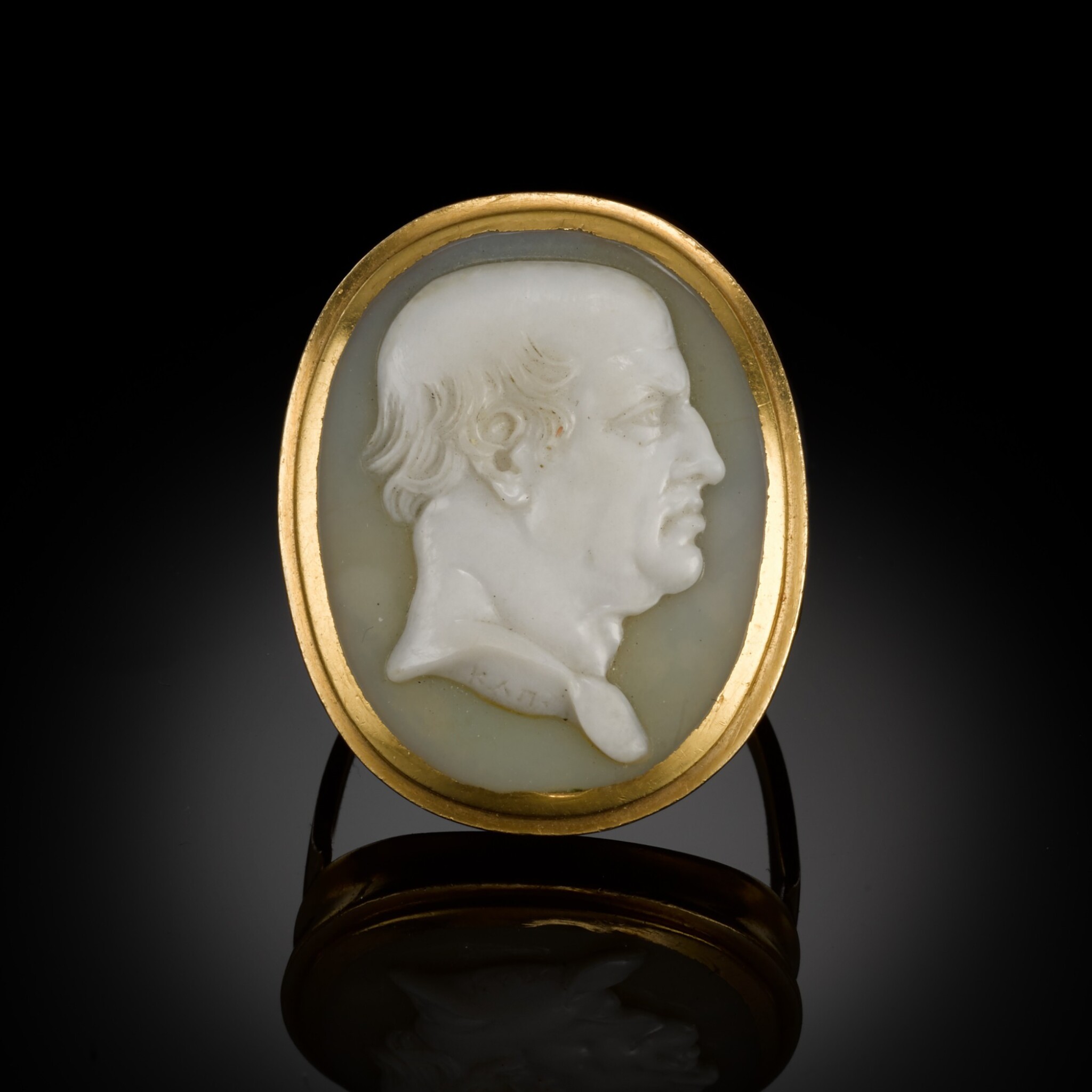 engraved in Greek: ΚΑΠ for Capparoni

Overall the condition of the cameo is very good with minor dirt and wear to the surface consistent with age. Minor tonal variation in the ground if the stone; possibly natural veining. Minor wear to the ring mount including a few nicks.

Perhaps made for the Pallavicini family;

from whom acquired by the present owner

This superbly engraved gem relates to another cameo also by the Roman gem cutter Gaspare Capparoni which has historically been identified Maecenas, the legendary patron of Horace and Virgil, and friend of Octavian. The two gems appear to be variants of the same model, and both share similarities with glyptic portraits traditionally identified as Maecenas (see Tassie, nos. 10723-10743; 15612).

Both gems were published by Lucia Pirzio Biroli Stefanelli in 2009 (op. cit., pp. 225-227, no. 1; the present gem in the addenda to her article, p. 239, no. 28). The related gem is recorded in a glass paste in the Paoletti collection (VIII, 352; 'Mecenate di Ecret'), whilst a gesso appears in Cades (no. 1.68.554; 'Testa di Mecenate cammeo'). The composition is slightly different to the present cameo, with a less elaborate neckline and the inclusion of a drape. The same Greek signature appears in the ground to the back of the sitter's head.

Lucia Pirzio Biroli Stefanelli questions the traditional identification of the first cameo as Maecenas, and suggests that instead Capparoni's model could depict the Italian engraver, excavator and art dealer Giovanni Volpato (1735-1803). She points to a comparison with Volpato's idealised tomb portrait by Antonio Canova in the church of SS. Apostoli, Rome (op. cit.). Pirzio Biroli Stefanelli's theory is compelling and there is a resemblance to Volpato. However, the facial similarities between Capparoni's model and glyptic portraits of Maecenas are strong. Compare, in particular, with the amethyst formerly in the collection of the Duc d'Orléans, which is published by Tassie (no. 15612). The model is thought to derive from a carnelian signed Solon in the Farnese collection, and an amethyst by Dioscordies in the Cabinet des medailles, Bnf (op. cit.). However, if Capparoni did not conceive his model as portrait of Maecenas (and admittedly there are small differences with earlier models), he was probably at least inspired by the famous model of Maecenas. Presenting Volpato (or another eminent figure) in the guise of Maecenas would certainly have been flattering for a person with antiquarian interests.

The present cameo was illustrated subsequently by Pirzio Biroli Stefanelli in the addenda to her Capparoni article. She describes it as relating to the 'so called Maecenas' (the aforementioned gem), and appears to suggest that the sitter could be Robert Foulis (1707-1776), who was a printer at the University of Glasgow and founder of the Glasgow Academy of Arts. This identification is unlikely, however, given the baldness of the present sitter; Foulis is depicted with hair (albeit thinning) in portraits. Moreover, a visual comparison between the two gems strongly indicates that they represent the same sitter and are versions of a common model, which, as Cades and Paoletti originally noted, is likely to be Maecenas.