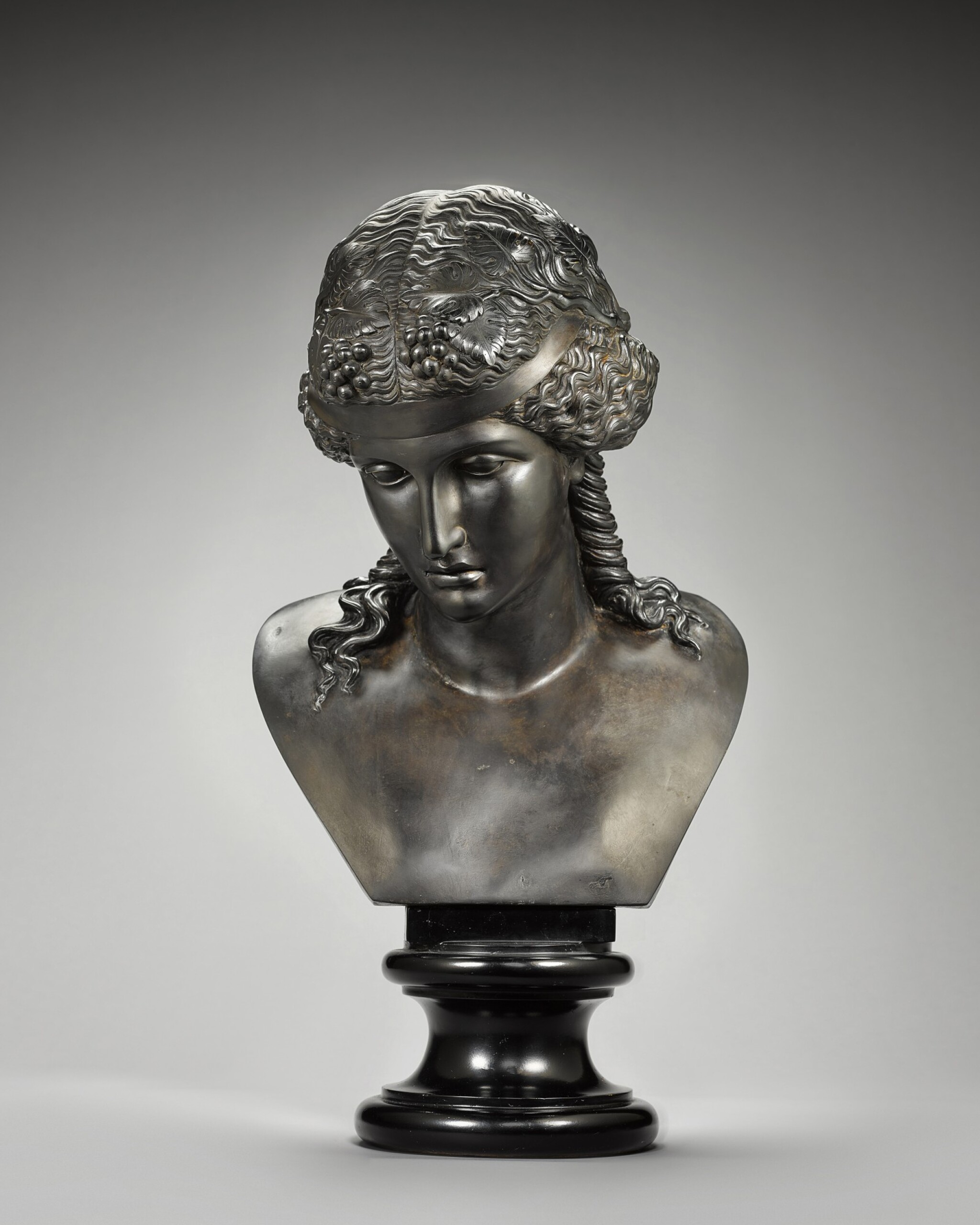 bronze, on a painted composite socle

Overall in very good condition with minor dirt and wear consistent with age. There are a few minor casting flaws and patches, including to the chest and proper right shoulder. Some minor nicks and scratches, in particular to the edges of the truncation. There is some wear to the dark patina in areas, in particular to the hair at the back, and some dryness and residues in the crevices of the hair.

There is minor wear to the socle including nicks and scratches.

This beautiful bronze bust of the god of wine, Dionysus (Bacchus), exhibits a particularly high quality of casting and chasing, evidenced by the waxy treatment of the hair and bunches of grapes connected to the wreath of vine leaves. The subject and quality of the bronze immediately brings to mind the celebrated Erma di Bacco by Luigi Valadier and Benedetto Maciucchi in the Galleria Borghese, Rome (inv. no. CXXXV). The crisply delineated lips seen in the present bronze are similar to those on the Borghese herm, as well as in other works by Valadier including his bust of Mengs, of which there is a cast in the musée Granet, Aix-en-Provence (inv. no. S-860 1 709). An examination of the reverse and interior of the bronze confirms that it is a lost wax Neoclassical cast. Valadier, who was the most celebrated bronze caster and silversmith active in Rome in the 18th century, is an obvious candidate for the present bust. However, it should also be noted that Francesco Righetti (1738-1819), amongst others, cast the present model (the Capitoline Dionysus, see below) on a smaller scale. Compare with Righetti's cast of the model in the Ashmolean Museum, Oxford, formerly in the Fortnum collection (inv. no. WA1889.CDEF.B405). Whilst Valadier is the strongest candidate as maker of the present bust, there were other talented bronze casters active in Rome in the second half of the 18th century, such as Righetti, who would have had the technical expertise to cast an object of this high quality.

The present bronze follows a Roman bust of Dionysus from the late Hadrianic period (AD 117-138), now preserved in the Capitoline Museums in Rome. A copy after a fourth-century BC Greek original, the ancient marble was part of a group of sculptures donated by Pope Pius V to the Palazzo dei Conservatori in 1566. In 1797 it was handed over to the French under the terms of the Treaty of Tolentino; however, following the defeat of Napoleon, it was returned to Rome in 1816 and reinstalled in the Capitoline Museums.

The god of wine is depicted as a beautiful young man, wearing a fillet across his forehead, his luxuriant curls of hair crowned with vine leaves. His downcast gaze is fixed in a calm expression, and his youthful features are characterised by softly modelled cheeks, a straight nose and full lips. This arguably feminine representation of the god has resulted in the bust's former identification as a woman, usually a Bacchante or Ariadne. The legendary art historian J. J. Winckelmann (1717-1768) lauded its exuberant beauty in his writings, believing its subject to be the sea goddess Leucothea.