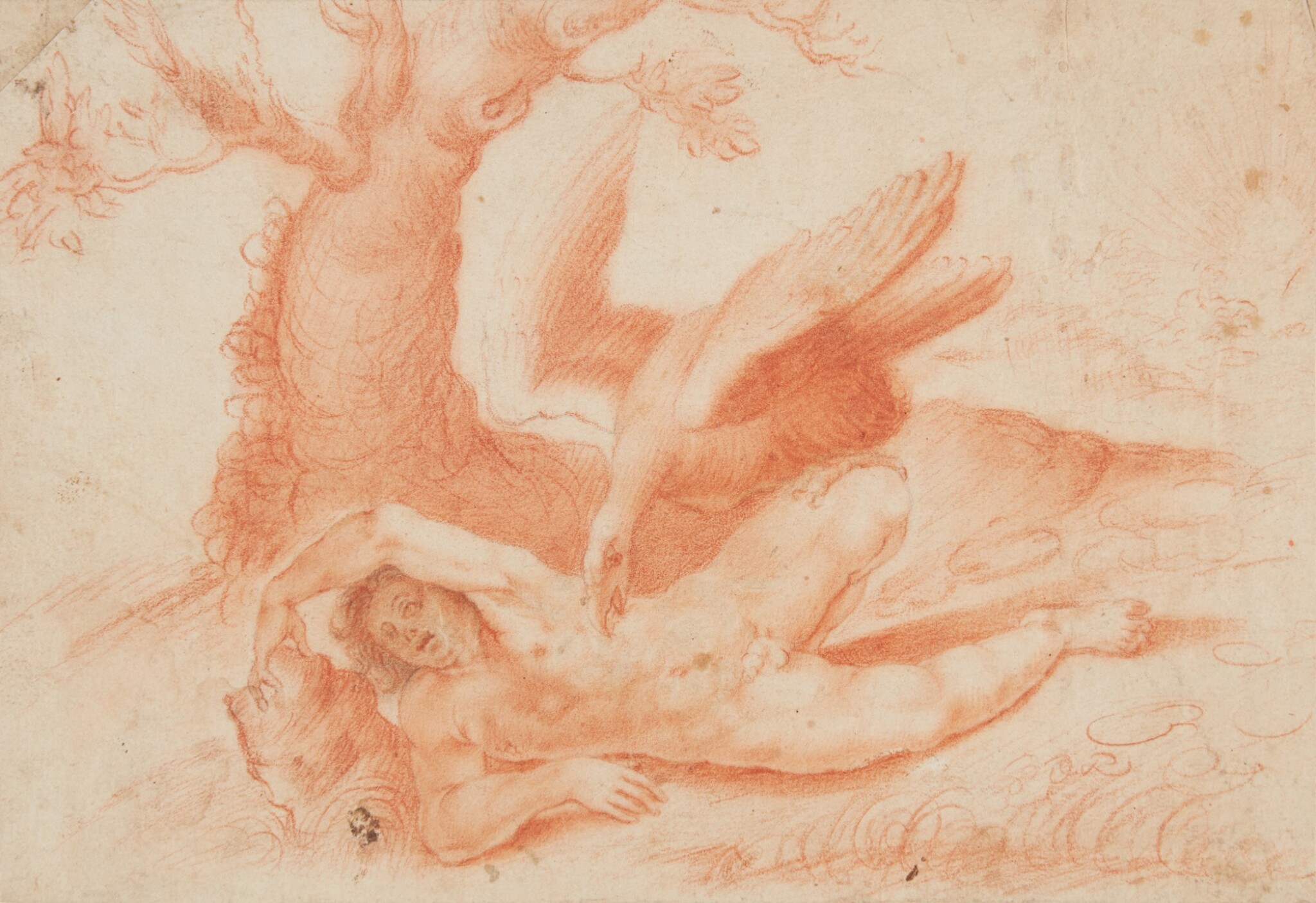 Laid down on an old backing. There is surface dirt and staining to areas of the sheet. The upper left corner has previously been repaired. The chalk media remains in reasonable condition throughout with the image strong. Sold unframed.

Extremely little is known of Quade van Ravesteyn's life, though it is thought he originated from 's-Hertogenbosch, in the Netherlands. From 1589 until around 1608, he worked at the extraordinary Prague court of the Holy Roman Emperor, Rudolf II (1552-1612), alongside a variety of leading artists from all over Europe.

Only a very few drawings can be attributed to Quade van Ravesteyn, all on the basis of comparison with a signed red and black chalk drawing of Cupid Stung by Bees Running to Venus, in Budapest.1 The handling in the present drawing seems very comparable to that sheet, and the mythological subject-matter and figure type is also typical of the artist's painted works.2

We are grateful to Dr. Marco Simone Bolzoni for bringing to our attention a drawing in the Albertina, Vienna, attributed to Giuseppe or Bernadino Cesari, with a closely related composition.3 Given the differences of details, especially in the tree and the angle of the figure’s head, it seems possible that both drawings look back at an earlier prototype.

In the Greek myth, Prometheus defied the gods by stealing fire from them, passing it on to humanity, and thereby giving them technology and civilisation. For this he was sentenced by Zeus to eternal torment, bound to a rock, with an eagle (symbolising Zeus) pecking out his liver – which miraculously grew back each night, only to be pecked out again the following day. In terms of imagery, the myth of Tityus is closely related: slain by Artemis and Apollo for attempting to rape their mother, Leto, Tityus was condemned to eternal torment in Tartarus, where two vultures constantly pecked out his regrowing liver.  Both scenes were represented in a number of Attic vase decorations, and frequently in paintings, drawings and prints, in the Renaissance and beyond. Perhaps the most familiar image of all – and certainly the most widely copied and engraved – is Michelangelo’s drawing, historically identified as Tityus, in the Royal Collection at Windsor Castle, which is broadly similar in composition to the present drawing, but shows the eagle and the tree in rather different positions.4 Michelangelo’s drawing was made around 1530, and was in the Farnese Collection until acquired by King George III in the 18th century.