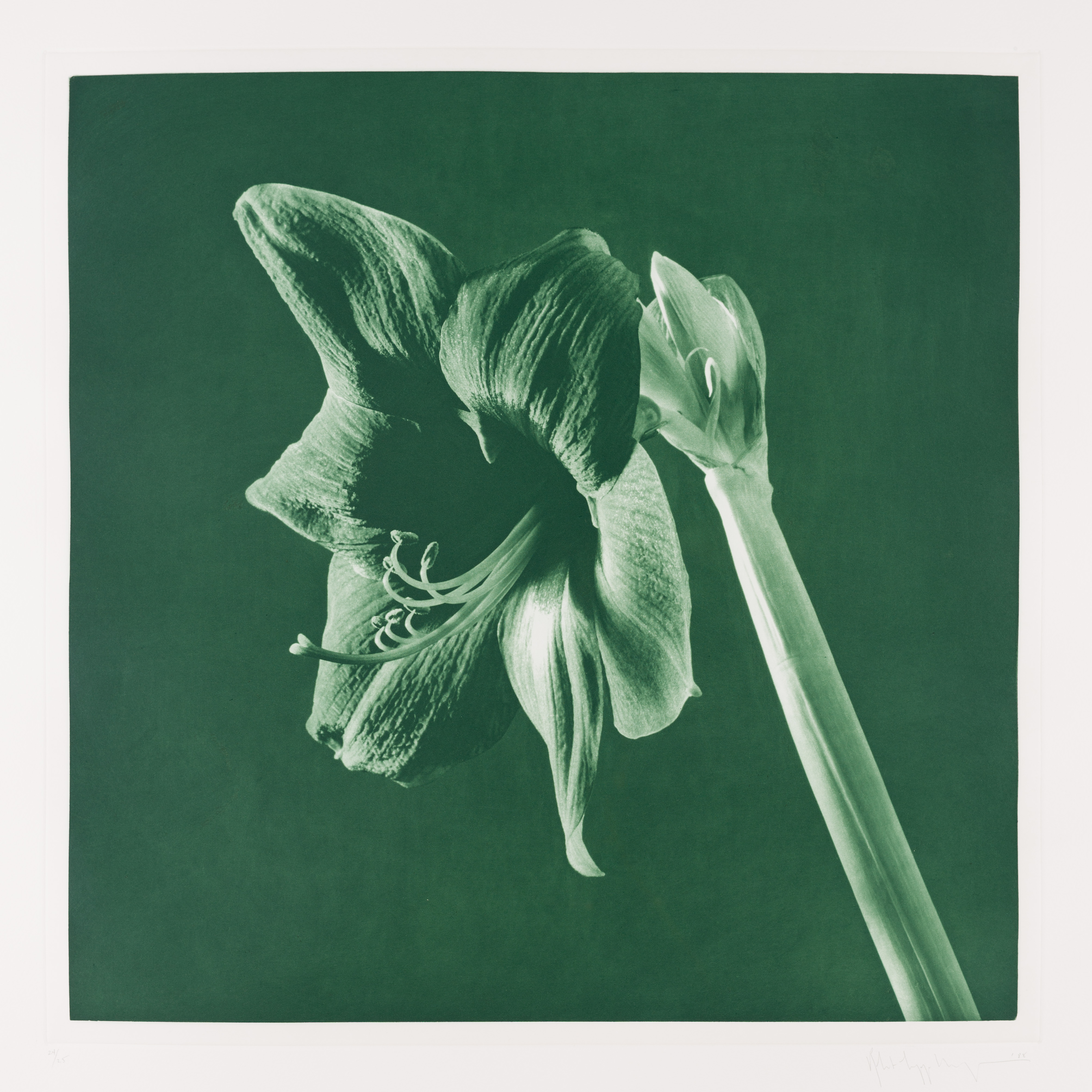 In 1963, Mapplethorpe enrolled at Pratt Institute in nearby Brooklyn, where he studied drawing, painting, and sculpture. Influenced by artists such as Joseph Cornell and Marcel Duchamp, he also experimented with various materials in mixed-media collages, including images cut from books and magazines. In 1969, he and Patti Smith, whom he had met three years earlier, moved into the Chelsea Hotel. Mapplethorpe acquired a Polaroid camera in 1970 from artist and filmmaker Sandy Daley and began producing his own photographs to incorporate into the collages, saying he felt "it was more honest."Mapplethorpe quickly found satisfaction taking Polaroid photographs in their own right and indeed few Polaroids actually appear in his mixed-media works. In 1973, the Light Gallery in New York City mounted his first solo gallery exhibition, "Polaroids." Two years later he acquired a Hasselblad medium-format camera and began shooting his circle of friends and acquaintances—artists, musicians, socialites, film stars, and members of the S & M underground. He also worked on commercial projects, creating album cover art, including covers for Patti Smith and Television and a series of portraits and party pictures for Interview Magazine.

In the late 1970s, Mapplethorpe grew increasingly interested in documenting the New York S & M scene. The resulting photographs are shocking for their content and remarkable for their technical and formal mastery. Mapplethorpe told ARTnews in late 1988, "I don't like that particular word 'shocking.' I'm looking for the unexpected. I'm looking for things I've never seen before … I was in a position to take those pictures. I felt an obligation to do them." His career continued to flourish. In 1977, he participated in Documenta 6 in Kassel, West Germany and in 1978, the Robert Miller Gallery in New York City became his exclusive dealer.

Mapplethorpe met Lisa Lyon, the first World Women's Bodybuilding Champion, in 1980. Over the next several years they collaborated on a series of portraits and figure studies, a film, and the book, Lady, Lisa Lyon. Throughout the 1980s, Mapplethorpe produced images that simultaneously challenge and adhere to classical aesthetic standards: stylized compositions of male and female nudes, delicate flower still lifes, and studio portraits of artists and celebrities, to name a few of his preferred genres. He introduced and refined different techniques and formats, including color 20" x 24" Polaroids, photogravures, platinum prints on paper and linen, Cibachrome and dye transfer color prints. In 1986, he designed sets for Lucinda Childs' dance performance, Portraits in Reflection, created a photogravure series for Arthur Rimbaud's A Season in Hell, and was commissioned by curator Richard Marshall to take portraits of New York artists for the book, 50 New York Artists.

That same year, in 1986, he was diagnosed with AIDS. Despite his illness, he accelerated his creative efforts, broadened the scope of his photographic inquiry, and accepted increasingly challenging commissions. The Whitney Museum of American Art mounted his first major American museum retrospective in 1988, one year before his death in 1989.

His vast, provocative, and powerful body of work has established him as one of the most important artists of the twentieth century. Today Mapplethorpe is represented by galleries in North and South America and Europe and his work can be found in the collections of major museums around the world. Beyond the art historical and social significance of his work, his legacy lives on through the work of the Robert Mapplethorpe Foundation. He established the Foundation in 1988 to promote photography, support museums that exhibit photographic art, and to fund medical research in the fight against AIDS and HIV.