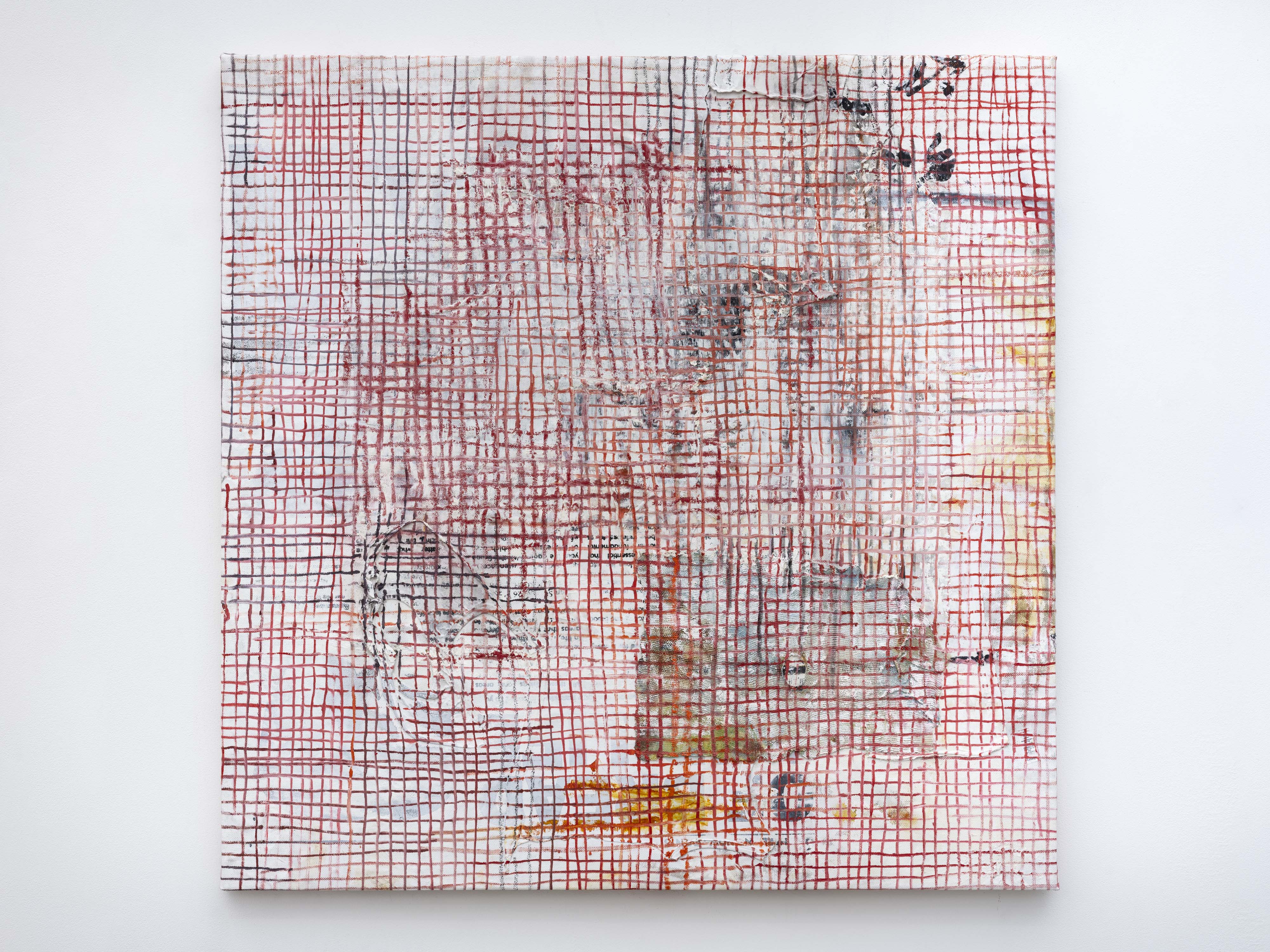 Mandy El-Sayegh’s (b. 1985, Malaysia, lives and works in London, United Kingdom) highly process-driven practice is rooted in an exploration of material and language. Executed in a wide range of media, including densely layered paintings, sculpture, installation, diagrams, and sound and video, El-Sayegh’s work investigates the formation and break-down of systems of order, be they bodily, linguistic, or political. She is particularly interested in exploring the Part-Whole relationship–how something significant yet unpremeditated emerges and comes into being through various smaller, micro-interactions or repetitions. She physically demonstrates this by collaging disparate fragments, text, and found imagery, and layering them with materials like latex, rubber, and clay that mimic organic matter. Through simple, repetitive patterns such as a hand-painted grid or geometric molds, formal and narrative synthesis occurs that is not consciously intended or anticipated.

El-Sayegh likens her exploratory, observational process to the occurrence of contemporary social and political events, which unfold in highly chaotic and often disturbing ways. Justifications or explanations for such events typically appear after the fact–they are devised in an effort to impose order on an inherently subjective and incomplete set of social, cultural, and political processes. The artist’s work aims to remove the veil of these superimposed structures and reveal the intricacies of growth and decay as they happen in real time. El-Sayegh is interested in the observation of process (of science and of self) and she believes that through such observation, one can better understand how the social and political phenomena that shape our world exist in a constant state of flux.

El-Sayegh’s work begins with found fragments, which are the “parts” that possess the power to disrupt overarching structures and assumed truths. Her fragments include sourced copies of the Financial Times, imagery from advertisements, or collected doodles and Arabic calligraphy from her father’s home in London. She collages these elements together and asserts her own perspective by drawing directly onto the works to create double-meanings and call into question our assumptions and understanding of typically unquestioned systems.

El-Sayegh’s work is in public and private collections, including Collection Nicoletta Fiorucci Russo, London; and Start Museum, Shanghai, China. In 2017 El-Sayegh was shortlisted for the Max Mara Art Prize for Women in collaboration with the Whitechapel Gallery, London and was invited to participate in the Chisenhale Gallery Commissions Programme 2017–19, supported by the LUMA Foundation.