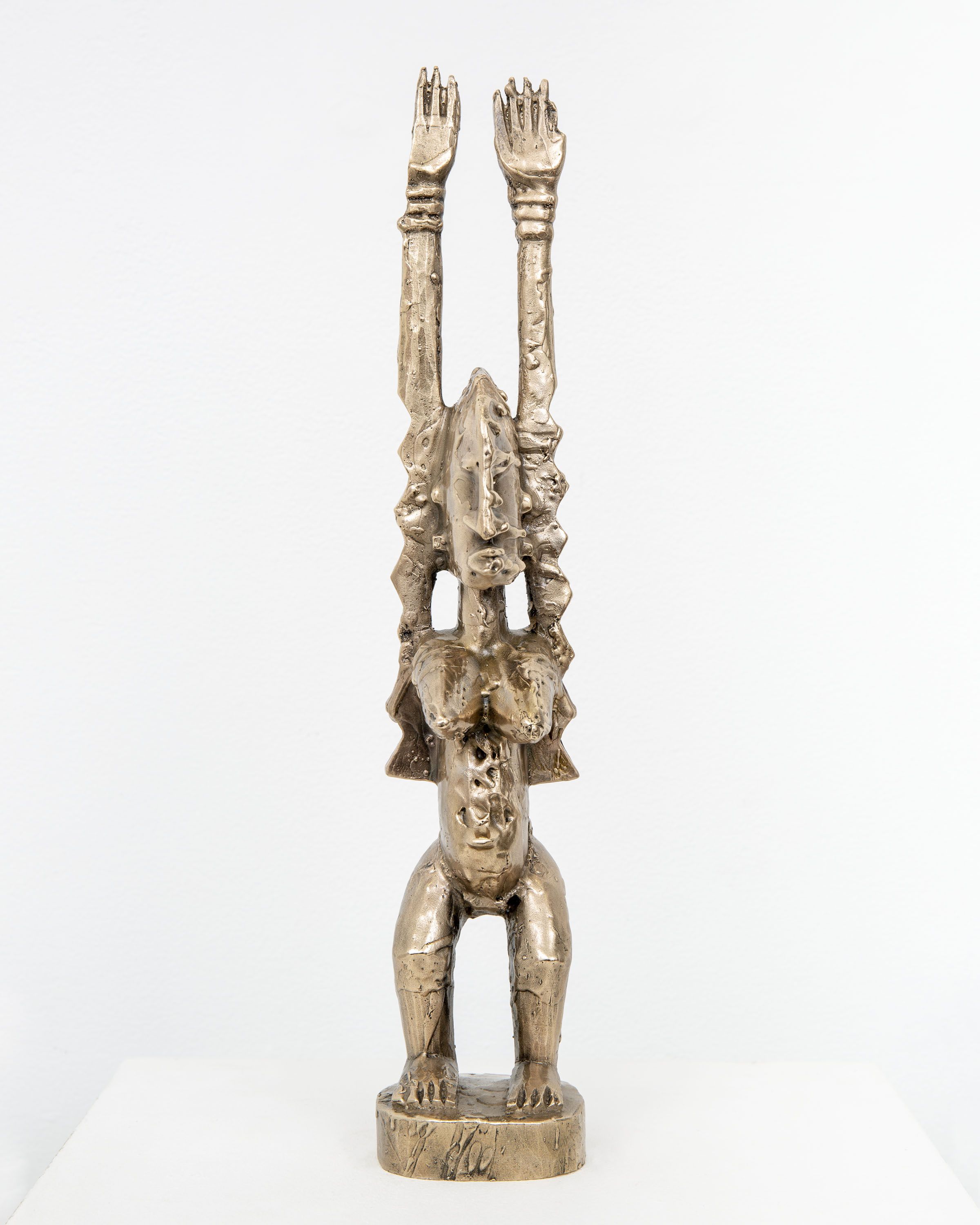 Courtesy of the artist and Marianne Boesky Gallery, New York and Aspen

Sanford Biggers’ work is an interplay of narrative, perspective, and history that speaks to current social, political, and economic happenings while also examining the contexts that bore them. His diverse practice positions him as a collaborator with the past through explorations of often-overlooked cultural and political narratives from American history. Working with antique quilts that echo rumors of their use as signposts on the Underground Railroad, he engages these legends and contributes to this narrative by drawing and painting directly onto them. In his BAM series, Biggers seeks to memorialize and honor victims of police violence in the U.S., pointing towards recent transgressions and elevating the stories of specific individuals to combat historical amnesia. This series is composed of fragments of wooden African statues that are dipped and veiled with thick wax and then ballistically ‘resculpted.’ Biggers then cast the remnants into bronze, a historically noble and weighty medium. Each sculpture is named and dedicated after unarmed victims who have died at the hands of law enforcement.

Sanford Biggers (b. 1970) was raised in Los Angeles and currently lives and works in New York City. He is the recipient of numerous awards. Most recently, he was appointed the 2021-2022 Dr. Martin Luther King, Jr. Visiting Professor and Scholar in the MIT Department of Architecture. In February 2021, he received Savannah College of Art & Design’s deFINE Art Award; in 2020, he was awarded a prestigious Guggenheim Fellowship and appointed Board President at Sculpture Center; in 2019, he was inducted into the New York Foundation for the Arts Hall of Fame; in 2018, he received the American Academy of Arts and Letters Award. In 2017, he was presented the 2017 Rome Prize in Visual Arts. His museum solo exhibition entitled Codeswitch opened at The Bronx Museum of the Arts from September 9, 2021, to April 5, 2021. This exhibition is a survey of over 50 quilt-based artworks and will travel to The California African American Museum, Los Angeles, CA (July 28, 2021 – January 23, 2022). On May 5, 2021, he debuted Oracle, a monumental bronze Chimera sculpture, along with a multimedia public art exhibition throughout Rockefeller Center presented by Art Production Fund and Rockefeller Center in partnership with Marianne Boesky Gallery and will be on view until June 29, 2021. He has had solo exhibitions at the Contemporary Art Museum St. Louis (2018), the Museum of Contemporary Art Detroit (2016), the Massachusetts Museum of Contemporary Art (2012), and the Brooklyn Museum (2011), among others. His work has been shown in several institutional group exhibitions, including at the Menil Collection (2008) and the Tate Modern (2007) and recent exhibitions at the Metropolitan Museum of Art (2017) and the Barnes Foundation (2017). Biggers’ work is held in the permanent collections of the Museum of Modern Art, New York; the Metropolitan Museum of Art, New York; the Whitney Museum of American Art, New York; the Museum of Contemporary Art, Chicago; the Walker Center, Minneapolis; the National Museum of African American History and Culture, Washington D.C.; the Dallas Museum of Art, Dallas; and the Legacy Museum, Montgomery, among others.