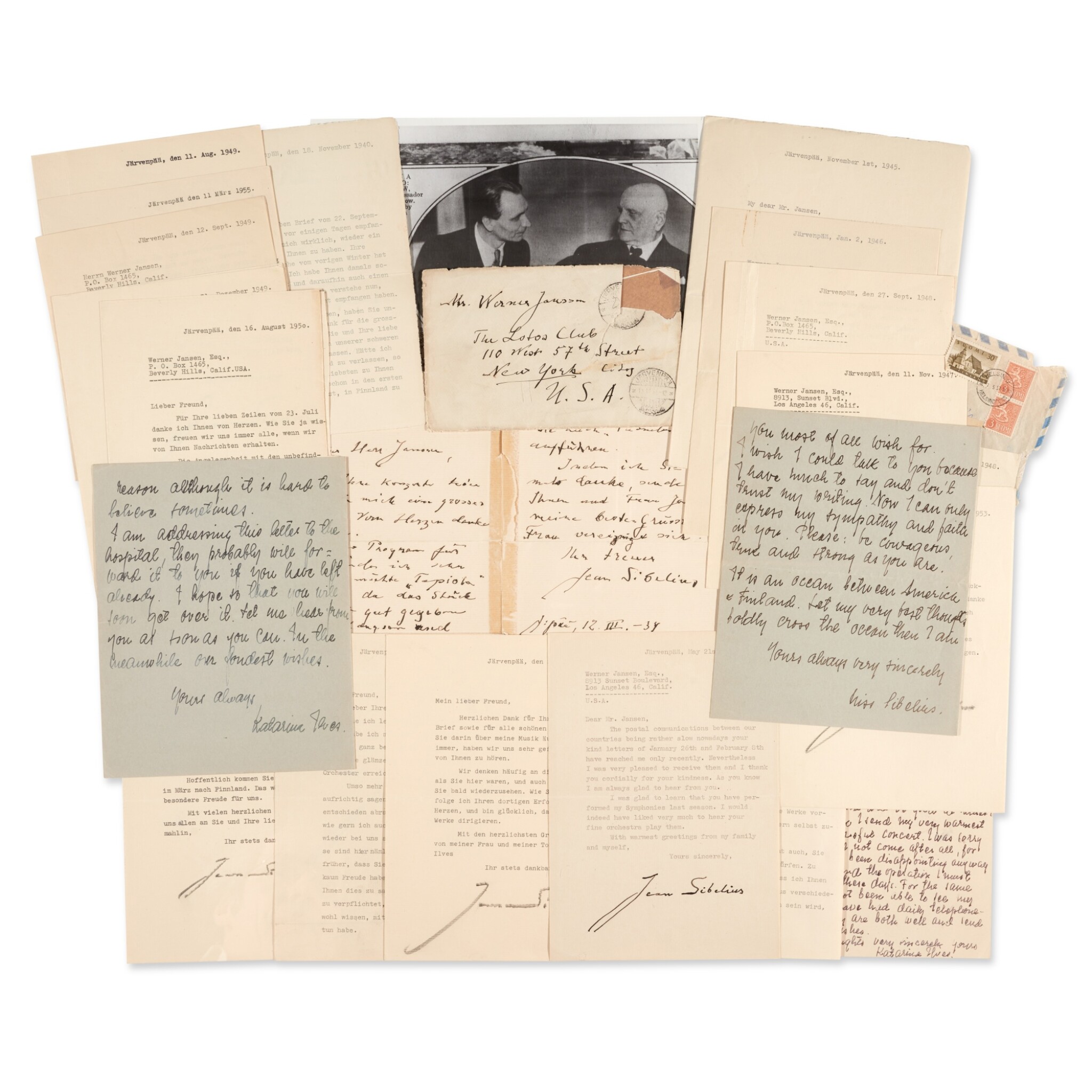 Remarkable collection of 22 letters signed ("Jean Sibelius"), in German and English, to the conductor Werner Janssen

comprising 4 autograph letters signed and 18 typed letters signed, discussing a number of his works, including Tapiola, The Swan of Tuonela, and the Symphony no.8 ("Betreffs der Achten aber bin ich, wie Sie ja schon wissen, stumm"), noting that Tapiola is not performed well in Finland, advising him against coming to Finland [in 1951] to perform his works, thanking him warmly for what he has done for his art, mentioning his festival concert in Los Angeles on the occasion of his eightieth birthday, referring to the unsatisfactory rehearsal schedule of the local orchestra, Janssen's career, and other matters

31 pages, plus blanks, various sizes, with one autograph envelope and four typed and manuscript envelopes, the autograph letters mounted on card, Järvenpää, 1934-1957

together with: 7 heartfelt and confidential autograph letters signed and one autograph document (a 4-page translation of a review in the Ilta-Sanomat of Janssen's historic Sibelius concert in February 1934) by Katarina Ilves, discussing the future of Sibelius's home Ainola, a proposed film about Sibelius, Luonnotar, and other matters, 25 pages, with a printed card acknowledging messages of condolence for Sibelius's widow, one autograph envelope, Helsinki, 1934-1972; a telegram from Sibelius and his wife Aino to Janssen in Helsinki congratulating him on a soulful performance of his sixth symphony, dated Järvenpää, 9 April 1937; and a photograph of a newspaper illustration showing Sibelius in conversation with Janssen

A HISTORIC COLLECTION OF LETTERS FROM THE COMPOSER TO HIS GREATEST CONTEMPORARY MUSICAL INTERPRETER.

The international reputation of the American conductor and composer Werner Janssen (1899-1990) was made following the legendary all-Sibelius concert he gave in Helsinki in 1934. Sibelius declared the performances definitive, and Janssen was honoured with the Order of the White Rose for services to Finnish music. Katarina Ilves (1903–1984), the fourth-born of Sibelius's six daughters, was considered by her siblings to be the daughter closest and dearest to their father.