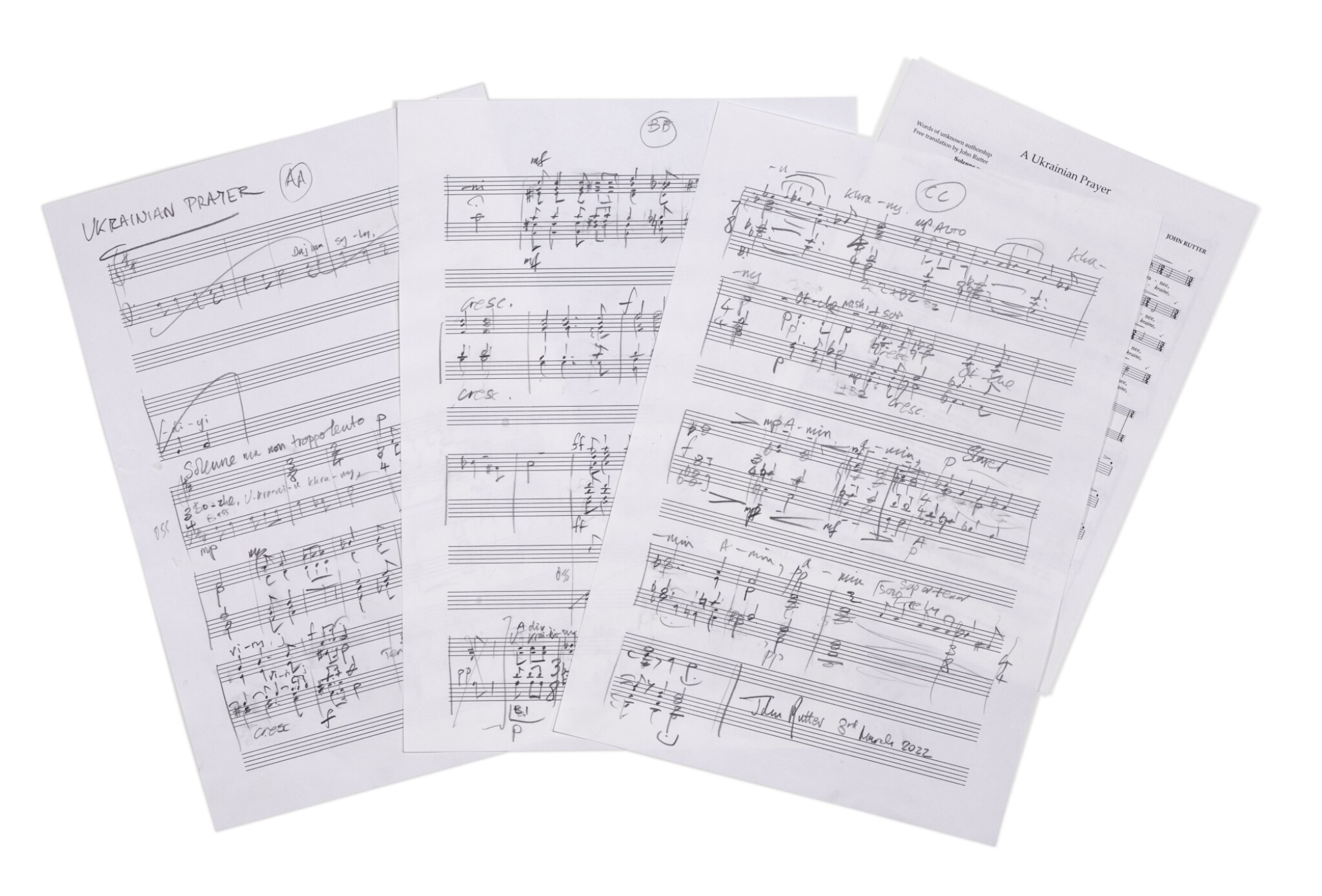 Autograph manuscript of A Ukrainian Prayer, for unaccompanied voices, signed at the end ("John Rutter")

A COMPOSING SCORE FOR THE COMPLETE WORK, APPARENTLY THE FIRST DRAFT, scored for SSAATTBB and solo soprano/and or tenor, notated in pencil on up to five two-stave systems per page, with autograph title ("Ukrainian Prayer"), boldly written with a number of deletions, erasures, and revisions, 46 bars plus some deleted bars

A modern classic, and a moving addition to the choral repertory.

This dramatically beseeching setting of an anonymous Ukrainian prayer was the composer's response to current global events, written at breakneck speed following a late-night service at Clare College, Cambridge, where he heard a setting of the prayer. The world premiere was given by a choir of 300-strong in London on 15 March 2022. The autograph here, evidently the composer's initial composing draft, diverges in many points from the published score.

A literal translation of the Prayer's text is:

We understand from Collegium Music Publications that the printed edition of the score has so far been acquired by around 9,000 individuals in over 80 countries.

One of the most gifted and widely-loved composers of his generation, John Rutter is especially well known for his early compositions for the church, including many carols which have come to embody choral Christmas music.

Manuscripts by living composers have become rare items, swept aside by technology. Few composers cultivate individual calligraphy when they can access sophisticated music notation on their ipads or computers. This sale of autograph manuscripts, sketches and scores composed in the last twenty years therefore represents a special opportunity.

The manuscripts comprising lots 82-93 are offered for sale by the University of York Music Press (UYMP), a charity that champions contemporary concert composers, with a focus on helping younger composers establish themselves.

The lots in this section encompass music for the concert hall, opera house and film by some of today's best-known composers: Thomas Adès, George Benjamin, James MacMillan, and Debbie Wiseman. Included too are those who continue to write an elegant calligraphy - Robert Saxton, Michael Finnissy, and Judith Weir. Most topical is John Rutter's anthem for Ukraine. Particularly fascinating is a sketch by the late Harrison Birtwistle (his initials at the foot of the manuscript were the last thing he ever wrote).

Altogether, twenty-two composers are represented in the sale, all of whom have donated their manuscripts for the support of UYMP's charitable activity.